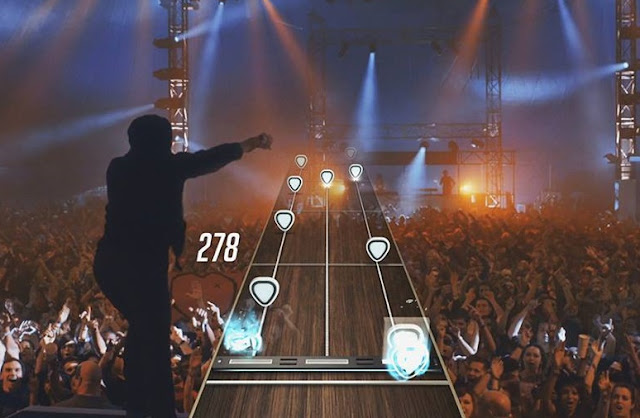 Guitar Hero Live is the latest in a long line of games to wear the Guitar Hero name (after a bit of a hiatus, anyway). Activision might struggle to get people interested in the series again, after burning so many out in years past before the pause, but this prior Guitar Hero games failed to do: take the series in a new direction while remaining true to its roots.

The Guitar Hero games helped to popularise music/ rhythm games in North America. In indulging the wish fulfilment fantasy of everyone who ever wanted to strum a guitar and produce great music but never had the chance because they lacked the money or skill to do so, Guitar Hero scratched the same itch as the likes of FIFA series did for football fans. While it admittedly took some time to wrap my head around the idea of prancing around the living room in front of friends and family wielding a big plastic guitar, the allure was undeniable as we frequently spent nights strumming away at increasingly difficult songs.

The problem was, the Guitar Hero series, as well as a couple of rivals (see: Rock Band) badly oversaturated the market. Too many new games, too many new songs, and often the classics that roped people such as myself in initially gave way to different songs meant to reach out to a broader audience – but ultimately failed. The end result was the long hibernation of a series that had blown up only to quickly fade. 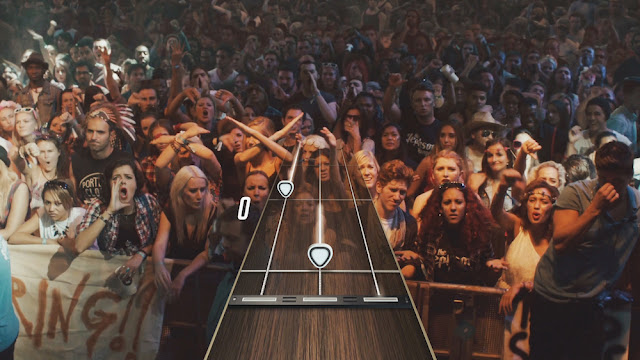 When you pick up this new game’s plastic guitar for the first time, the immediate thing that you notice is the difference in the fret buttons. Instead of the traditional five button configuration (that is still being used by Rock Band 4), you instead of two rows of three. This means more buttons to actually play with, but they are closer together. This is great for those who are new to the game or have smaller hands. Of course, adding a sixth button means an even greater challenge once you get familiar with the configuration – and that’s certainly a positive for people who are rhythm game addicts and want to get deep into the hardcore difficulties.

Another substantial change is the change in visual style. Running with the ‘Live’ notion in the title, you still play the role of lead guitarist, but now you are seeing the stage through the character’s eyes. You see the crowd and their reaction as well as how your band mates are responding to your performance. My oldest daughter had an interesting way of putting this when comparing the introduction of Rock Band 4 to that of Guitar Hero Live (because let’s face it – these two games are going to be compared frequently over the coming weeks and months). She said, “Rock Band’s tutorial and first performance made the player feel good about themselves while explaining how to play. Guitar Hero’s tutorial starts off making you feel good about yourself, explains some things, but then ultimately makes you feel guilty for letting your band down.”

I actually found that to be an incredibly apt description, because Guitar Hero Live really wants to put you into the performance. I cannot decide if I feel that it is an improvement or not. I did miss some of the charm that came with the cartoon visuals and pyrotechnics of the old performances, but for those really looking to make a more involved, realistic experience, I would say that Guitar Hero Live has succeeded on that front. Admittedly, I tend not to pay as much attention to those things when I am playing the game, because I am so focused on the incoming notes that I tend to have tunnel vision towards the other visuals. That being said, there are auditory cues from band mates as well, and it certainly made for an interesting viewing experience while watching others play. 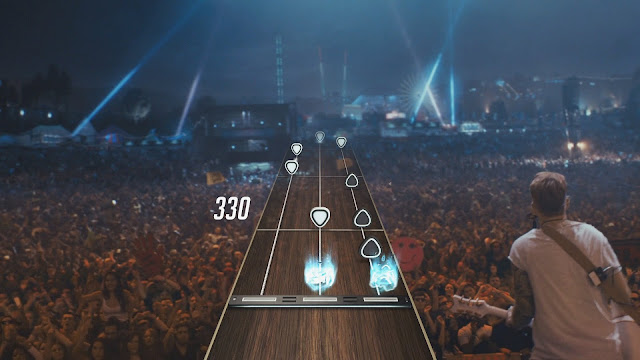 As for the music on the disc, I felt that the selection was good and diverse – and that is really the direction all of these games are going for now. No doubt future DLC packs will cater to more specific musical tastes. I found myself liking a handful of specific songs on this disc more than the ones on Rock Band 4 (yup, there’s that comparison again), but there are more songs on Rock Band 4’s disc.

That is where the other new innovation comes in – Guitar Hero TV. This mode is going to be pretty divisive I will admit, but I came around to it more quickly than I expected. Essentially what the mode offers is a channel running two rotating playlists that change genres at regular intervals. It is like television in the sense that you have no control over the content. This allows you to build up tokens and play with/against other players online. The service is supposed to be getting a number of updates in the future, keeping it current with new songs to play. The only downside is if you have a limited window to play in, it might be a bit of a bummer to come home from work, jump on to play before having to make dinner and help the kids with homework, only to find your two choices both ones you have little interest in.

This is where the tokens come in to play. Whenever you play a track, you earn tokens. Naturally performance impacts how many tokens. There are daily quest/login bonuses as well that can help you to accrue them a bit more quickly. You can then spend tokens to play a particular song whenever you want (as well as use them to purchased locked content for your character). You do not have the option to purchase or ‘own’ the songs as DLC however, which will undoubtedly rub some people wrong. In truth there are times when it does bug me a little as well. I am one of those people who has a tendency to keep going at a song over and over again until I get it perfect – and this does not suit that style of play at all. 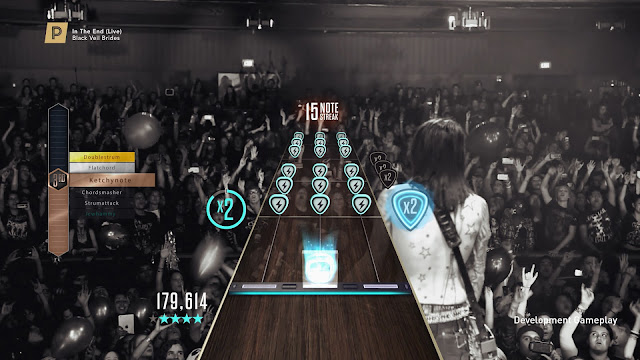 The most impressive thing to me about Guitar Hero Live is the way the developers have breathed new life into a series that became notorious for doing the same thing over and over again. Guitar Hero Live manages to recapture that essence of playing a beloved instrument, crafting a familiar experience. However, by taking a handful of chances, the series feels different enough to want to invest in it again. Some of the changes are for the better (the guitar), others I am indifferent towards (the visuals) and yet another will take time to see how it fully develops (TV). Hopefully we will continue to see the franchise innovate going forward.

Arslan: The Warriors of Legend gets a release date