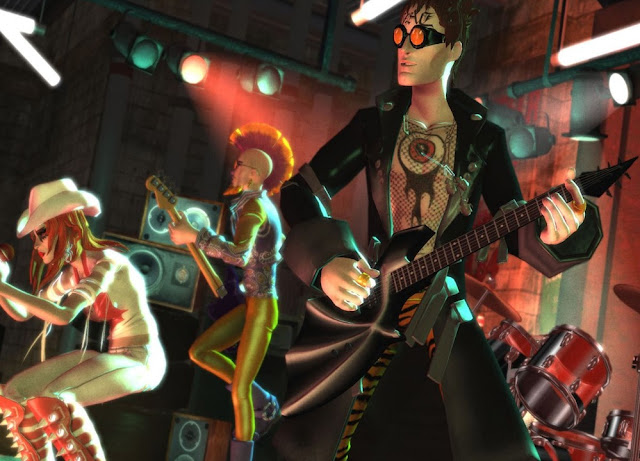 Rock Band 4 brings the band and the fun back together after several years off. The rhythm gaming market has changed quite a bit since Guitar Hero and Rock Band hit the scene and oversaturated the market with too many releases. Having had time to let people miss the series and rekindle their desire for plastic instruments, Rock Band 4 swoops in at an opportune time and accomplishes most of what it set out to do.

Rock Band 4 is a return to basics, which is by and large a good thing. That being said, sometimes things are just a bit too basic. For the uninitiated, the premise is one where you use a controller shaped like a guitar as coloured tabs scroll down your screen from the top. You have to strum the guitar in time with pressing the correspondingly coloured button to play the song. Easier levels of difficulty space things out, proving ample space between notes that lets you play along at a more leisurely pace. Higher difficulty selections bring rapid fire series of notes that will test your ability to time and combine them.

The very definition of easy to learn, hard to master, the prior Rock Band games were hits with my kids when they were still quite young with smaller hands that sometimes struggled to move from one fret button to the next. Fast forward to now, and my youngest is thirteen and while she is physically capable of playing, the higher levels of difficulty still provide a substantial challenge. Instead of rolling through a preset list of songs like the career mode of Guitar Hero, Rock Band 4 has you building sets on the fly. You will see options that you (and your friends) get to vote on. Some are very specific, while others are vague. You might see options such as: random song by said artist, random song from a genre, random song from a year, or a specific song – or you can go to ‘more’ and look at a new list. This lack of structure can be fun, but it can also lead to the occasional odd repeat of songs in quick succession, depending on how the cards fall. That said, the Tour mode plays out like a branching story and often has some pretty funny moments tucked into the captions between shows. 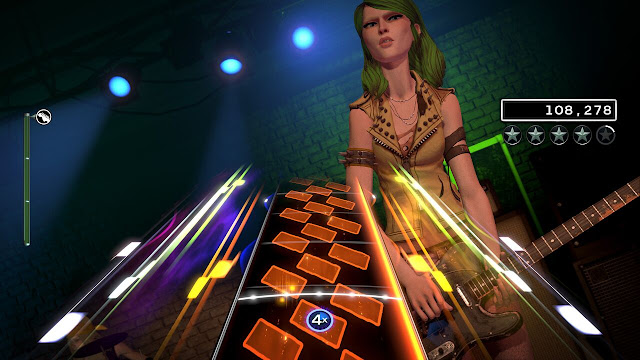 However, it is worth noting that some of the modes might feel lacking, and this gets back to the “too basic” part. Looking for multiplayer options? You will not find any. Were you a fan of the keyboards before? Those did not make the cut. Rock Band 4 is all about the guitar, bass, drums and vocals now. Performance and practice modes are nowhere to be found. Character creation is incredibly thin, with only a handful of fairly superficial options. You cannot create your own setlist.

Your mileage on some or all of the above features will likely vary, and at first blush, it sure feels like Rock Band 4 is something of a hatchet job that takes away without giving back. However, there are some pretty cool new features worth talking about as well. The most notable of these is the freestyle guitar solos. That is not to say you get to do everything you want in these, but instead of relying on the specific five coloured notes you usually see, during these stretches of play you find your own rhythm and strum away. There are hash marks that help to give a sense of beat, and you can slide from the top of the neck of the guitar to the base depending on if you are hitting higher or lower notes. I strongly recommend using the tutorial for this part alone. Admittedly I just fired up the game and played, figuring I knew how things worked. By and large I did, but I was pretty confused when this first happened. However, once I understood the loose framework around the solos, it all came together beautifully.

Drumming and vocals make their return as well, and while I still spend the majority of my time with the guitar, these two means of play are still quite viable. Like the guitar, drumming is predicated on timing strikes to the appropriate indicators. Vocalising is something I subject almost no one to – I seriously could not carry a tune in a bucket. Still, by and large it seems to work well with the voice recognition having a good understanding of your tone and scoring you appropriately. It is worth noting that the new instruments can be updated via firmware if needed. While on the topic of the hardware, the new guitars are very limited and difficult to find. You have to buy the bundle that comes with the game as there are no standalone guitars at this point. A week after the release, there were still none in stock within a fifty mile radius of where I lived, selling out in minutes when the sets became available. If you have older equipment, the good news is you can probably use it, but you do have to pick up an adaptor for the Xbox One. The instruments really have not changed from last generation to this from a functionality standpoint. Again however, these adaptors seem to have limited availability in some place – something no one currently seems to be able to keep in stock for any length of time in my area. 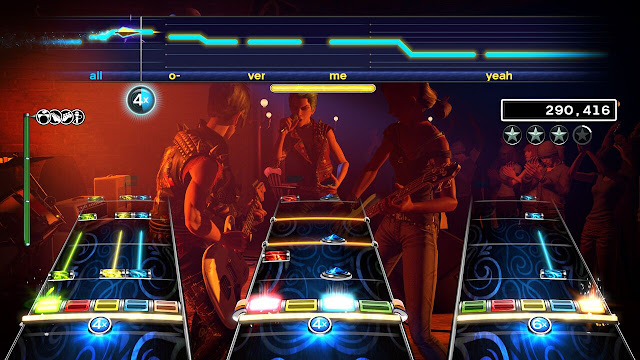 The next question that inevitably comes to mind is an important one: how is the song list? I found it to be something of a mixed bag, with a good number of songs with solid variety, but in the effort to please everyone, I suspect the list will have as many misses as hits for most players. I tend to lean towards classic and harder rock music, and certainly there is representation of those songs here, but there are also lots of what I would consider pop or B-list artists that I have never heard of before. That is not necessarily a bad thing however, as it allowed me an opportunity to hear, learn and appreciate new songs that were never on my radar before. One of the great things about the Rock Band games in the past is that I often discovered a handful of songs that I absolutely loved but had never heard of before, and the same holds true of this latest iteration of the series.

Now the good news: most (not all – likely due to licensing issues) of your previously purchased music is available to be downloaded and played here. About 900 of the 1,700ish tracks that Rock Band 4 plans to offer from their previous games are currently available. This is a great value for people who purchased lots of songs previously, and it immediately expanded my on-disc offering with titles I was already quite fond of by a few dozen. It is interesting to note that unlike the last generation of Rock Band games, Rock Band 4 plans to make this title the gateway going forward. What I mean by that is instead of kicking out Rock Band 5, 6 and 92, Harmonix has said that it plans to release more content digitally over time. If you want in you just pick this title up and you will be able to purchase your way into future expansions and bundles as they become available.

While the above is undeniably awesome, there are a handful of hiccups to be had there as well. The interface for finding your music is a bit of a mess. You can search by title and artist names alphabetically as well as by genre, but some of the options such as bundle do not show anything yet. Additionally, wading through all of the downloadable content fifty titles at a time is just plain bad interface design, and I did not see any easy options to sort by price on the Xbox One, meaning I had to sift through the entire catalogue to see what I had purchased. Thankfully those items were clearly noted with ‘Purchased’ on them, and the wishlist option is a great way to tag titles you are interested in buying later as you are sifting through, but odd load times and a boatload of titles with limited sorting options really does not make for the ideal experience. 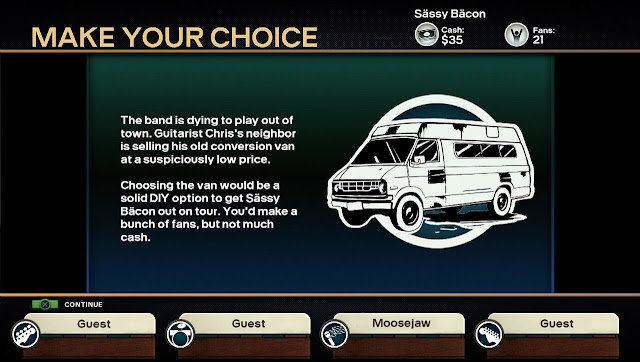 Related reading: And for people that don’t want to rock out, but want a great rhythm game, there is always the Hatsune Miku titles.

Rock Band 4 is all about musical discovery and appreciation. There is a wish fulfilment that the game indulges that makes it easy to move past the fact you are holding a toy guitar in your hand, and simply lose yourself in the song of the moment, focusing on the beat and the lyrics. When a favourite song comes on, it is impossible not to feel like you are a part of the music, making it happen, and it is a glorious feeling when you nail that song at 100 per cent accuracy.

It is great having the band back together again.