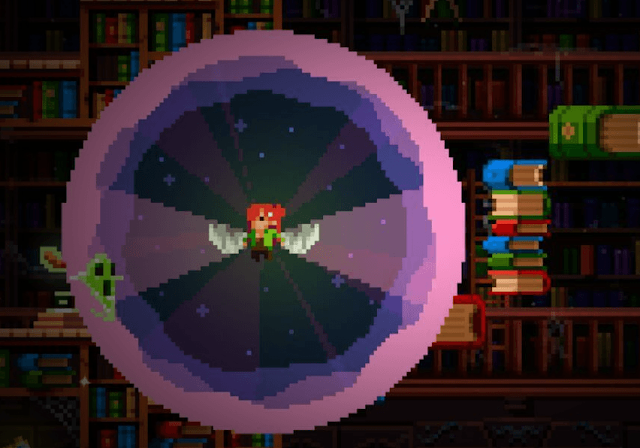 Remove Your Ectoplasmic Risks with These Extreme Exorcists

Do you have an ectoplasmic emergency? Are the spirits of those marginalised during the cryptic yesteryears infesting your home, possessing your chairs, and somehow manipulating the seats to bite the buttocks of your husband, lawyer, and unaccepting mother-in-law? Then don’t just pace the living room like some sort of incompetent quack! Call Mae Barrons and her fearless team of Extreme Exorcists! For the price of a ten minute cab ride to your overpriced, jaded psychiatrist, Mae and her squad of spirit-bombers will punch, kick, slice, harpoon, and detonate those mischievous wraiths, tricking them into spawning and mimicking the behavioral pattern of the exterminators so they can be easily herded together and – WHOOOM! – hit with the Extreme Exorcism!

I know what you’re thinking, while icing the bite marks swelling on your hind quarters: “How can I trust the quality of the service these so-called exorcists are offering?” And I’ll tell you what: I’ll provide one random customer review, an assessment that neither Ms. Barrons nor I have ever seen, and let you gain sympathy from a person who was once in your position about the satisfaction our expertise ultimately provided. We’re so confident in the praiseworthiness of this review, Mae and I will throw in an upward-swooping boomerang for the price of your phone call and a bottle of blue hair dye. So read the review. Be inevitably impressed. And call now or afterward: 1-800-BARRONS 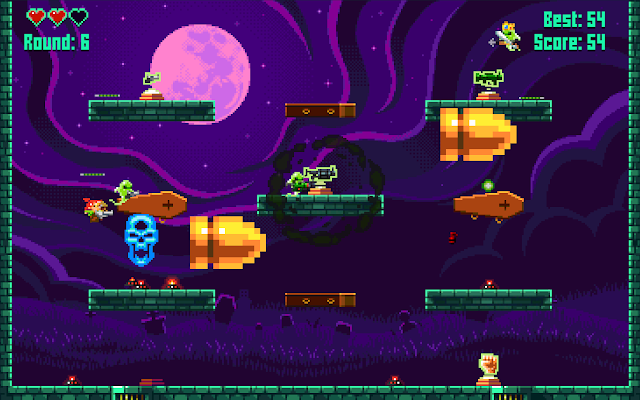 I’ve had modest living arrangements for all of my life. When I married my husband, whom I met in physics class during my third year at university, we always said that, even if we had the money, we’d forego excess and live in a house that was just big enough to accommodate the two of us, since neither of us ever wanted children. That plan was altered drastically last year when my husband, whose grandfather passed on while ice skating (his head smashed into the ice after his hip replacement “malfunctioned”), inherited an estate that, according to his family lawyer, “has been in the family since the days of a stuttering Winston Churchill.” (I didn’t discover my husband was from a wealthy family until our third year of marriage. But that’s no more relevant at the moment than my addiction to stylish sneakers and Haiku poetry.)

To condense what would otherwise be redundant exposition, we decided to stay in the house temporarily, to think on whether to keep, sell, or rent out the property, so we moved in a few of our smaller belongings (mainly trinkets of a sentimental value, since the house was already replete with furniture), and settled in. We really tried to make it a home. 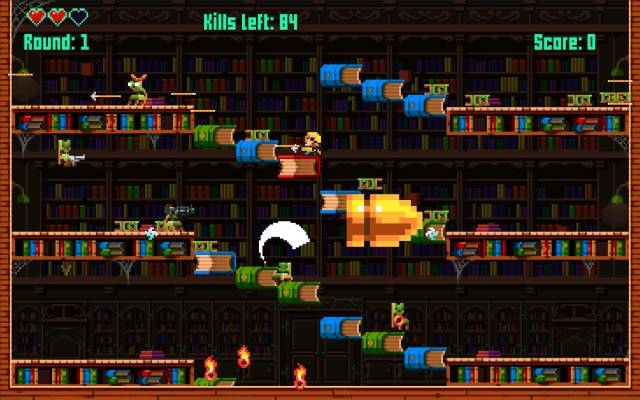 And for a few months, it was.

It was on the full moon of the first week of the third month that I witnessed an event of the most horrifyingly peculiar yet morbidly humorous variety: My mother-in-law, visiting from New York and displeased with the lighting in the main master bathroom, sat on a chair, when the chair – how do I say this – “bit her” on the ass. Then it began jumping in the air, biting and chewing and growling. Soon, a single chair in every room of the house was doing the same thing.

“It’s obvious that our quadrupedal butt-stools are possessed,” said my husband. “It’s time to do what only the most intellectual, versatile, and salaciously groomed couples do in this situation; it’s time to call Mae Barrons and the Extreme Exorcists.”

The Method of Mae

Within an hour of our call, Mae and her team of four drifted through the door. Without a single word, she and her squad (each of whom were small and simply animated, yet colorful and high spirited) began their effort to purge the house of our hostile freeloaders. I must say, her method was kind of unique: In an arcade-like battle royal fashion, her onslaughts were organised into rounds. Once the round began, she picked three of four randomly generated weapons (in this case, a shotgun, a handgun, and a sword, all of which were used at the same time with a single button press) from their spawning terminals, and simultaneously blasted and chopped the possessed chair into a swirl of slow-motion neutralisation. 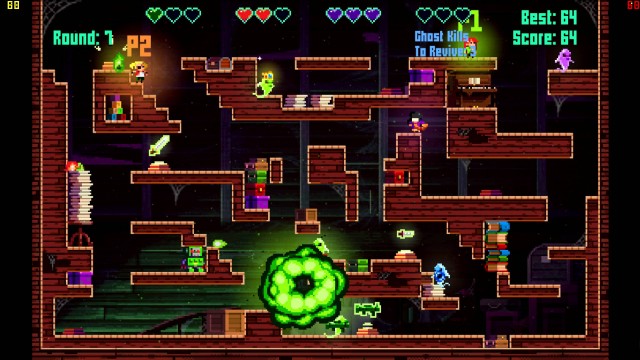 Once the chair was defeated and its inhabitant released, the second round began. Mae dropped from a new spawn point, and the newly freed humanoid spirit mimicked every action that Mae had performed in the last round, right down to her attacks. So by remembering her previous route and avoiding her previous attacks, she blew the ghost on its back with a rocket launcher. And again, the ghost she had just decimated copied her movements and actions of the last round. By the eighth round, there were seven ghosts darting throughout the room, each following the pattern Mae had used to destroy it, as she dodged and took out the most recently spawned apparition (which wore a gold crown) to bring the match to an end.

Now, at first, I honestly didn’t know what to think about this process. What the hell are you doing! You’re just creating more ghosts that will possess more chairs that will go on to chew through my sneaker collection, I thought. But by the eighth round, I saw the skill of her craft, if you will. By propagating the spirits, she was getting them to follow her movements, effectively herding them into groups so they could be more easily exorcised. You see, by the eighth round or so, wings, aptly called the Extreme Exorcism, appeared at one of the weapon terminals. By collecting and activating this device, Mae would emit a pulsing, spherical, white aura, wherein any ghosts would be permanently released from our corporeal world, whether they had unfinished business or not. But since Mae had only three lives per try, these ghosts proved a challenge to exorcise.

They were challenging initially, anyway. Once Mae killed several ghosts and gained enough points, she gradually unlocked access to new weapons, like the unstoppable harpoon gun, as well as access to new rooms, of which there are fifty, in the house (I hadn’t even been in half the rooms before this cursed possession fiasco!). And I could see in Mae’s eyes around room twenty -five that, regardless of the rooms varied layouts and environmental obstacles (if I would’ve known these rooms contained spikes or floating coffins, let’s just say I’d be reading Haiku on my comforter back at our old house right now), in spite of the initial excitement that memorising and dodging several ghosts attacks can bring, and despite the multiplayer and modes on offer (Arcade, Challenge, and Deathmatch), Mae’s method began to lose a bit of its novelty and challenge. Perhaps battling other apparitions, an enemy type distinct from the others that behaved on volition, could have maintained her early enthusiasm for the job. 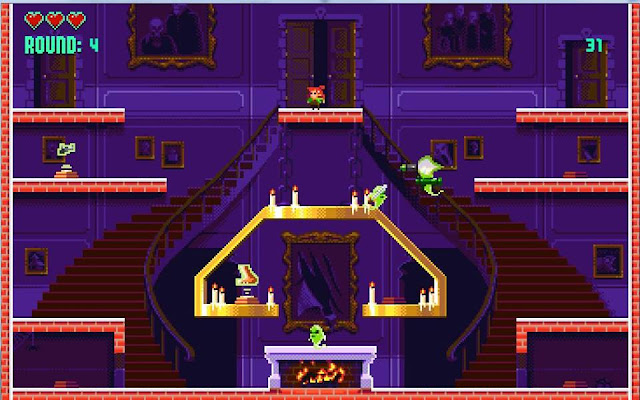 A Successful Expulsion of Evil

I’m so glad that my husband called Mae and her team, not only because she eventually expelled our house of the voracious chairs that took several bites out of my backside (oddly, the sores make wearing heels a pain), but because she had the look of a woman in her element. She may have lost a bit of her zest halfway through the job due to the eventual predictableness of her method, but said method is unique enough to deserve a customer recommendation. So if you’re in need of a wicked spiritual expulsion, consider opting for an Extreme Exorcism. Just make sure you bring the blue hair dye.