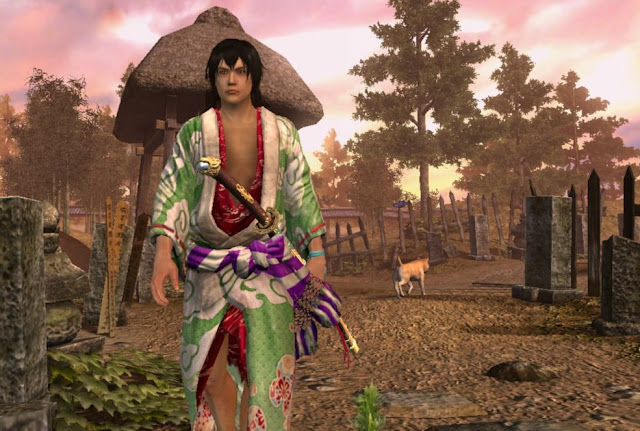 After scoring with a local geisha by complimenting the weather and suggesting she looks rather elegant in her clothes, I went to the magistrate’s office where a Pagan Min look-alike British delegate ordered me to take out a dozen of rogue warriors who take their swords to random passersby to test out their efficiency.

Not wanting to miss out on the action, he accompanies me and in a fashion similar to Zack Fair from Crisis Core, becomes jubilant and excited at the sight of the antagonists. Because I was very new to the game’s mechanics and controls, I was unable to unsheathe my sword – so I defeated the dozen warriors with nothing but my bare hands. When this was over, an anachronistic photographer offered to take my photograph, so I struck a pose (which in this game means standing perfectly still with an awkward look on your face) and I was sent to the save game screen. This is where the game teaches you that taking a photograph means saving your progress.

A little while later I learned that that game allows pickpocketing of downed enemies, so I went ahead and started doing just that… only to be instantly arrested on the spot by the very same constable who had not just forty seconds ago congratulated me on my heroic service. The screen went to black and the next thing I knew I was in a torture chamber surrounded by triplets and semi-naked slaves. It was here I quit the game and proceeded on with my real-life chores for the day. 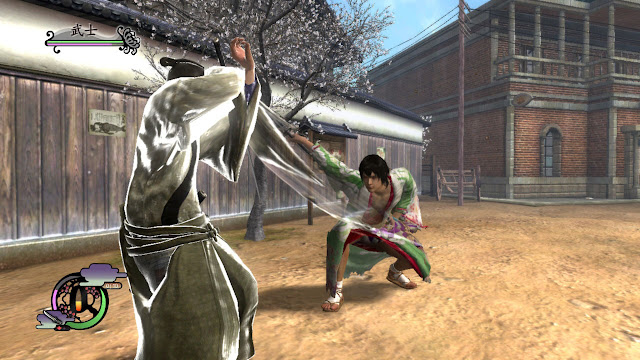 In any other deliciously weird Japanese game – for example, Deadly Premonition – I really wouldn’t have been bothered by this nonchalant transition from one bizarre, unexpected situation to the other. Games like this are designed to be unpredictable, so it’s perfectly understandable when you find yourself going from searching for Zombrex to pushing a wayward granny on a wheelchair in a zombie-infested shopping mall. Way of the Samurai 4 has a relatively mature and complex story that covers extreme ends of the spectrum, like fetishism and xenophobia to honour and loyalty, so from start to finish I was just hanging for it to start making some serious arguments around these themes and give me pause to think about what’s going. Instead what I got was practically non-existent character development and laughable dialogue. This game, just like an eager overachieving student, tries to juggle many things at once.

When it works, Way of the Samurai 4 is a clever little parody of open world games. It uses its surreal elements to satirise the way that other open world games can transition between different themes and objectives at the drop of the hat. The catastrophically-small environment to explore is a clever play on the reality of larger open world games – a statement that those games are padded out when the same amount of content can be quite easily (and effectively) squeezed into an area the fraction of the size. But most people won’t really be interested in that, because this satire is simply too dry – or perhaps subtle – to really resonate in an industry that thinks a nuclear explosion is a mild narrative device.

But not everything about this game is bad. Though the budget production animation is an issue when wandering about, it works surprisingly well during combat. It was only here that I was able to control the movements of my character without bumping every which way into things. You can execute two types of attacks, light and heavy, and those who’re familiar with such gameplay from other games know that light attacks are fast but do very little damage; whereas heavy attacks dish out a lot more but are slow to execute and leave you vulnerable to enemy attack. However, it doesn’t matter if you’re chaining combos or are wielding a strong weapon, because the combat system is so unrealistically tipped in your favour that it’s not particularly difficult to win. 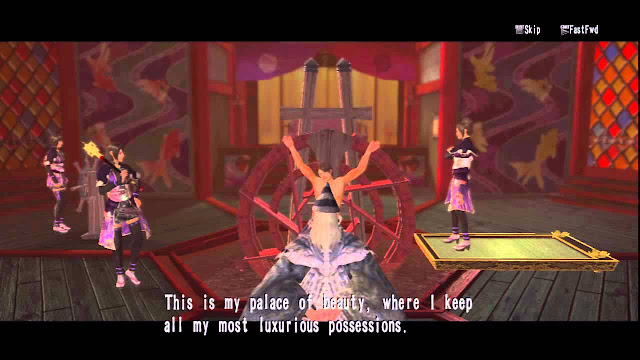 You see they all come at you one-by-one a la Bollywood fight scenes where if there are hundred bad guys, ninety-nine will stand perfectly still while one goes 12 rounds with the hero. I’m not overtly complaining about this approach to combat – it’s okay, really – but because it is so laughably easy to dispose your enemies, I wish Acquire had developed this after the Batman games and had copied that style closely (the original game was released years ago on PlayStation 3). There is the rare moment where the challenge level will pick up, and every now and then a character of importance will give you the task to take down a criminal or a rogue ronin. They are pretty tough to defeat but once you’ve mastered the non-poetic dodge-attack two-step, all the challenge goes out of the window.

Going back to the character animations, Way of the Samurai 4 is one of those “animation-centric” games in which if you perform an action (say, swing your sword) you’re unable to do anything else until said action is complete. Games that implement this mechanic are either loved (Dark Souls) or reviled (Venetica). If you ask me, Way of the Samurai 4 falls somewhere in-between. Outside of the combat, very little gives you any reason to unsheathe your sword; and should you accidentally do it in front of a potential rogue element, and because the action cannot be stopped mid-way, you’re forced to either participate in the fight or flee far, far away. In most cases, I recommend the second option.

Way of the Samurai 4 didn’t impress me a great deal, or perhaps I didn’t look in the right places, but it isn’t altogether bad. It has its charm and some good ideas running in the background, but these are offset by the game’s more overt issues, and a taste for the surreal that will never be popular for the mainstream. That being said, while this game was not for me but it is just odd enough that it might work for you.