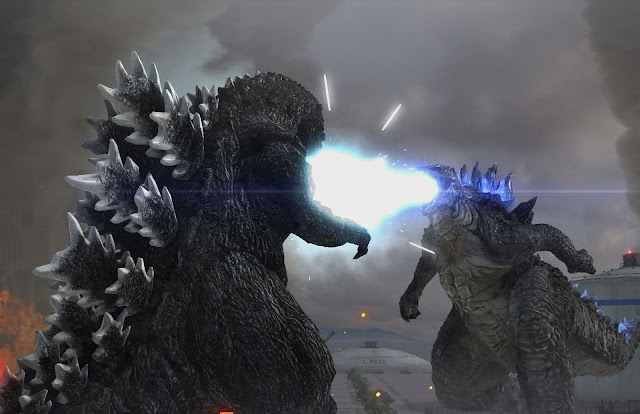 One word. One name. It carries with it instant familiarity. The recent movie went with the simple naming convention and it just worked. It was not the greatest movie ever, but I enjoyed it. It was fun, it took me back to being a kid who grew up on the movies long before I was old enough to understand any political undertones to the monster’s origins. I had hopes that the video game would follow suit, but unfortunately this title does not rise to the occasion and deliver a good experience.

You know that sensation of being a kid, hoping that the Christmas present in your lap is going to be a very specific thing? In your mind you might have blown it up a bit, made it an even bigger deal than it was to start with. The box is the right size, the right weight – it helps to reinforce those expectations. Then you take the wrapping paper off and you realise you got something close, but not quite what you were hoping for. I actually experienced that feeling with my first Nintendo when my parents asked me what game I wanted most for it at the time. I said Double Dragon – and I got Dragon Power. I gave it a good try, I played it, but it was not the same, it did not live up to expectations and it was disappointing in the end.

I share that story because Godzilla was a childhood favourite of mine and I came into this game release with perhaps unrealistically high expectations. The visuals never really looked all that great in the trailers and images, but I was willing to look past them if the game could deliver the goods. Unfortunately Godzilla has only a handful of solid ideas and fails to fully follow through on almost any of them. 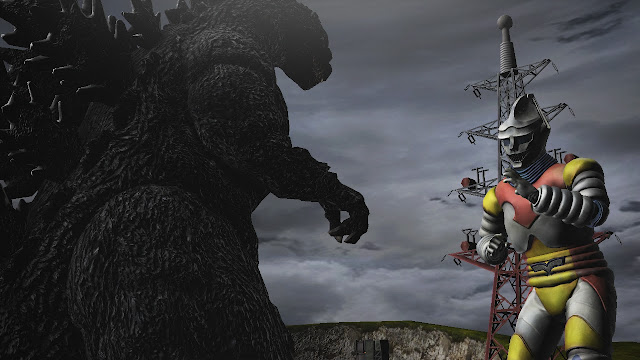 There are a several different modes, but players will undoubtedly spend most of their time in the God of Destruction mode. This is the mode that has the closest semblance of an actual storyline, though it is pretty thin. Essentially Godzilla has randomly reappeared and is looking to chow down on power generators that will allow him to grow larger in size. Along the way Godzilla tramples buildings, swats away bullets and missiles and midway through most levels gets an encounter against another kaiju (the monster things that Godzilla and his opponents are).

Now in theory, this could be fun, as the premise reminds me of Rampage, and that game was a favourite of everyone who liked Godzilla as a kid. Never mind that most of the visuals look like they could have been crafted on a PlayStation 2 (this is especially true of the cities, which feature uninteresting and often repeatedly used building structures with muddy textures), the idea of creating more chaos to grow Godzilla in size offered a nice sense of progression with the requisite chaos that comes from controlling a towering monster. The problem is in the execution, which is incredibly repetitive.

Godzilla handles like a big dumb animal. He is slow as he lumbers about stepping on tanks and crashing into buildings. The military crafts around Godzilla really do not offer much of a threat – I did not even see the red and orange framed screen indicating my near defeat until several levels into the mode. That part makes sense as Godzilla should be an almost unstoppable force of nature. He is so incredibly slow however, with awkward controls, that it almost becomes a matter of padding game time through limited mobility. 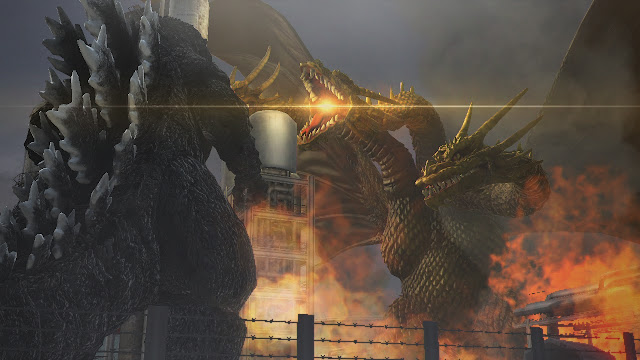 Instead of offering large, open expanses, each of these levels is actually a very refined space that offers a handful of objectives. Find camera points and you can see a brief, more cinematic perspective as Godzilla rages through a city block. These views actually look pretty cool, but they make for incredibly awkward handling. This is on top of already sluggish controls that rely on strange conventions like pressing L1 and R1 to turn, making Godzilla’s motions like the games you used to play on the PlayStation, before developers had a clue with how to work in 3D space. Your primary attacks come in three flavours: normal (which can be strung together for a 3 hit combo), hard (which is a spinning tail whip motion) and charge (which sends Godzilla rushing forward head-first). There is a really odd to pull off throwing motion, Godzilla’s famous radiation breath attack and a strange area burst of energy that I do not recall seeing in any of the movies.

The area burst and radiation breath attacks are tied to a timer that refills about every ten seconds. You have to rely on the breath attack entirely too often when battling larger monsters and while attempting to complete level objectives that target airborne enemies such as helicopters. There is no real aiming control for the breath – either a concentrated straight blast or a limited sweeping strike. It attempts to auto target however, and does so with mixed results when there is a lot taking place in the vicinity. Because there is really little more depth to combat than that, most of the God of Destruction mode is spent crashing around city blocks, smashing buildings, shooting down helicopters and angrily swiping at energy reactors with the same handful of attacks at your disposal.

This lack of combat depth really presents itself when other kaiju appear. These battles still serve as the game’s highlights, but they could have been so much better. Instead these battles usually devolve into a charge attack, following a few quick (I use that term very loosely) swings and then a special attack such as Godzilla’s radiation breath. You then attempt to avoid getting hit while the energy meter for that attack powers up again. Lather, rinse and repeat as you hopefully guide your kaiju to more successful random, spammy hits than your oversized opponent. 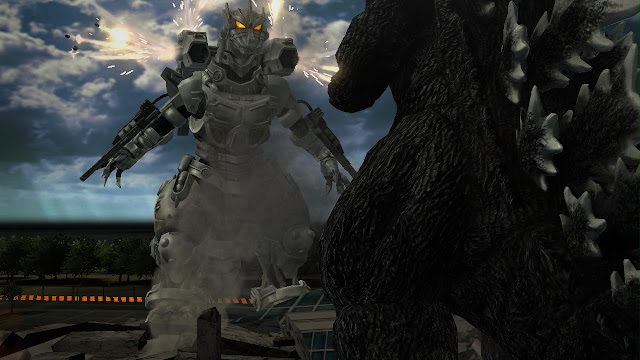 The God of Destruction mode is built for multiple playthroughs. By design, almost every time you best a stage, you are asked to choose another (centred around level of difficulty) stage. This requires at least four playthroughs to fully see all of the variable areas and to unlock each of the stage’s four cinematic camera views and to see all of the stages. Since playing through any one of these tracks only takes about an hour or so, the replayable structure was actually somewhat appealing to me, even if each level did basically boil down to pretty much the same thing each time.

The multiplayer modes represent a missed opportunity as well. The best moments in the God of Destruction mode are when you fight another kaiju. Watching them slam into one another, wrecking buildings and after particularly big hits – flying into buildings. The multiplayer on the surface should allow for some similarly great moments, and it does – with up to three monsters whacking on each other. This in particular feels like a throwback to some of the old movies where battles were just pure mayhem between the kaiju – yet it is online only. This is obviously not a real deep mode, but this mode would have had more legs to it were you able to slap around some buddies on the couch while playing. Everyone who has ever played a fighting game of any kind knows that couch trash talking is usually the highpoint in those experiences, and Godzilla fails to capitalise on that.

Now, two of the best things going for Godzilla revolve around its impressive roster of kaiju. The first is the aforementioned evolution system that lets you spend materials earned from kaiju fights from other modes and spend them to improve a monster’s abilities. It can unlock some new abilities while making existing ones more effective (such as reducing the amount of time between breather weapon strikes for Godzilla, as an example), the system is very slow. You will have to spend a ton of time grinding to earn these components. As someone who loves progression like this, I actually enjoyed this RPG element to the game, but had found myself wishing it was not such a slow slog. After my first four or five hours, I was able to unlock just two things. Considering the massive roster and the myriad of areas the points could go into, I could see this being a process that takes dozens of hours. Unfortunately, the game’s shallow mechanics fail to justify that sort of a time investment. 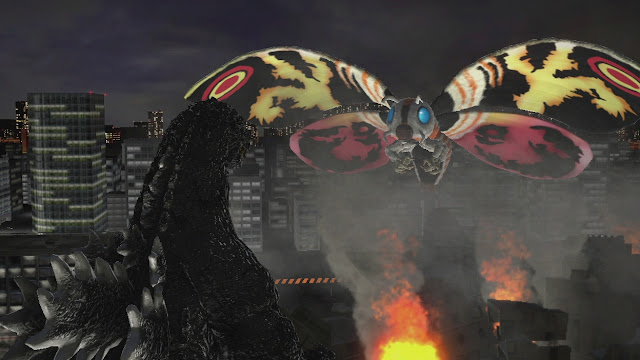 While the evolution system was rather appealing tome, my favourite part of the package was the Kaiju Guide. This feature allows you to read about the different monsters and accompanies the information with a still image as well. Since the kaiju are without a doubt the stars of this show, this mode actually is pretty entertaining to look through. There is one more brief mode of note called Diorama. Basically you can place your kaiju in environments and take screenshots of them.

Godzilla has the right idea in many places. The focus is on the kaiju and their epic battles, with an interesting progression system and some good homage to the source materials. Unfortunately this is a case where the extras are actually more interesting than the game itself. Godzilla should be fertile material for a fun game, but the slow pacing and shallow controls hold it back, creating a repetitive experience that misses too many opportunities for me to recommend it to anyone but the most hardcore of Godzilla fans.