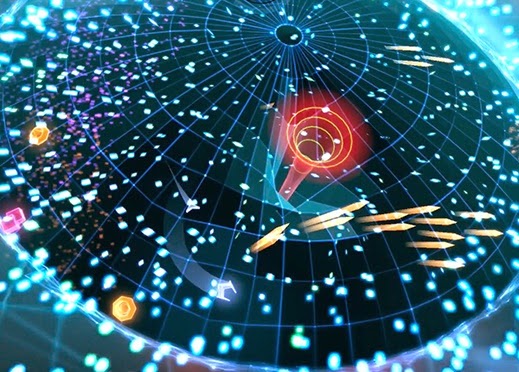 It takes just three minutes to turn me from a perfectly competent and confident player of games, able to hold his own in the most competitive of gaming environments, and turn me into a quivering wreck. My palms sweaty, my thumbs slipping off the Dualshock 4’s thumbsticks, I see my little avatar explode over and over and over again while I play this game.

Geometry Wars 3: Dimensions is harsh and demanding, but I do believe it’s also the finest modern arcade game you’ll ever play.

I am so glad that Activision has decided to get on board with the ‘let’s support small, clever projects’ trend among the big publishers. Relaunching the Sierra brand to house projects that aren’t designed as multimillion dollar blockbusters or licensed tie-ins, Activision has an exciting concept on its hands indeed. As with Ubisoft and Child of Light and Valiant Hearts, should this new venture take off we’re going to see a steady stream of highly innovative or experimental games that are backed by something most indies don’t have – actual money. For anyone that enjoys creativity in their games, it’s hard not to be excited by that. 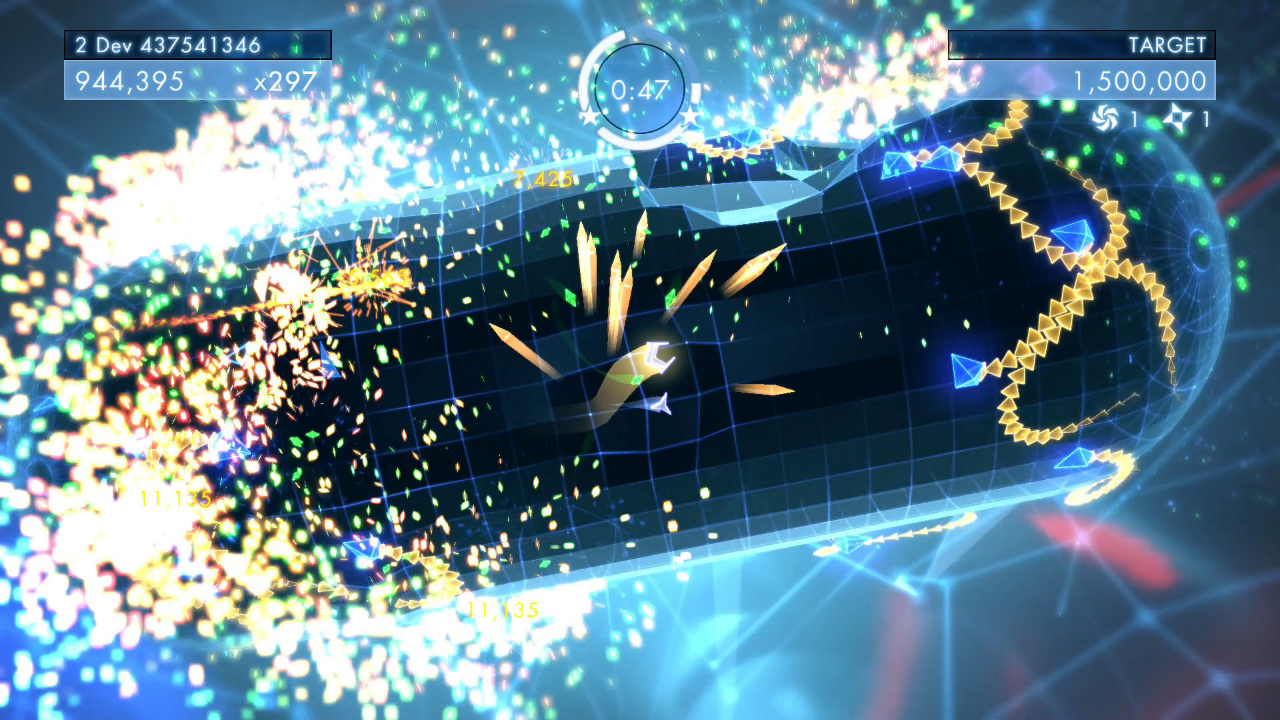 Geometry Wars 3 is the first game under this new Sierra banner, and while it still an arcade dual stick shooter, and doesn’t do all that much differently to previous games in the series, it does experiment with something most modern game developers would never dare touching: genuine, brutal challenge. In the “story” mode – which doesn’t really offer a story, but rather a sequence of levels – each of the 50 levels awards players with one to three stars based on how they perform and the score they accumulate. Were this a mobile game they’d be a few dozen levels in before anything lower than a three star score was even possible, but in Geometry Wars 3 I was lucky to earn more than one star after the first level. The first boss battle – about five levels in – took me over a dozen tries to get past.

And it’s not like I lack for skill in arcade games. Even previous Geometry Wars games, such as the one on the Wii or the iPad release, are games I’ve generally done well with. The developer of this one, Lucid Games, clearly decided to up the ante and challenge even veterans, and the result is something brutal. I sincerely doubt that casual players would look at this game and think it looks interesting in the first place, thanks to its abstract aesthetic, but if they did, I also doubt they’d have a hope in getting through all of the game’s many levels. I know I haven’t yet.

To enhance the challenge further there is solid variety in both the level design and the way that you’ll need to tackle the levels. Some are pure shootouts on flat planes, but others take place on spheres and cubes and feature much more interesting enemy patterns. And then there are the boss battles that seem determined to redefine what a bullet hell looks like. On your side it is possible to exchange some of the glowing green crystal-things you pick up in levels for powerups that make the experience slightly easier, but even the most dedicated person grinding away will never make the game easy for themselves. 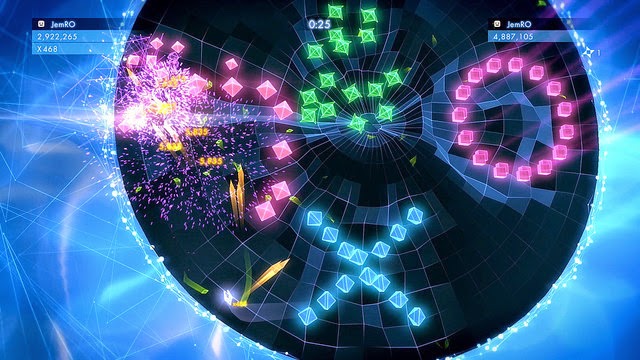 Thankfully there are other play modes for people that do get stuck on the single player game in order to hone their skills. There’s a couple of variations on the classic Geometry Wars game, with the default mode giving you the three minutes that I mentioned at the start to get as many points as possible. The only consequence of being hit by an opponent and losing a “life” is that it takes a few seconds to respawn, but of course that’s enough time to take you out of the running to post a respectable score to the online leaderboards.

Even as it batters and bruises you, Geometry Wars 3 reminds you why you love it thanks to its incredible presentation. You wouldn’t think that simple shapes inside a small arena could be visually arresting, but Geometry Wars’ neon glow and sheer speed is quick to induce such a trance that ‘bullet ballet’ has never been a more appropriate term. Supported by a thudding but understated soundtrack, I hadn’t noticed at first that I was actually co-ordinating my movements to the timing of the beat, but that’s exactly what I was doing. I don’t know if this was a deliberate effect designed in by the developer, or something that happened on an unconscious level as the game was being pulled together, but Geometry Wars almost – almost – works as a rhythm game where players that do co-ordinate their movements with the beat do see greater results. It’s highly abstracted and highly stylised, but Geometry Wars is a beautiful example of how both the visual aesthetic and the music can combine to create a meaningful impact on the gameplay.

There are also multiplayer modes, with a brief co-op campaign that only succeeds in adding even more colour and movement to the already dizzying experience. Jumping online, there are some competitive modes which are, in theory, fun, but Sierra and Activision might want to take note that when it comes to niche and indie games, they’re not going to have the same sized communities to keep the game alive as they enjoy in the likes of Call of Duty. Making a 4 vs. 4 competitive mode the ideal way to play works for a blockbuster release, but for a game of this scale it’s death warrant on release. To put another way unless you have seven friends with the game the chances of spending much time in that multiplayer mode with a full house are slim at best. 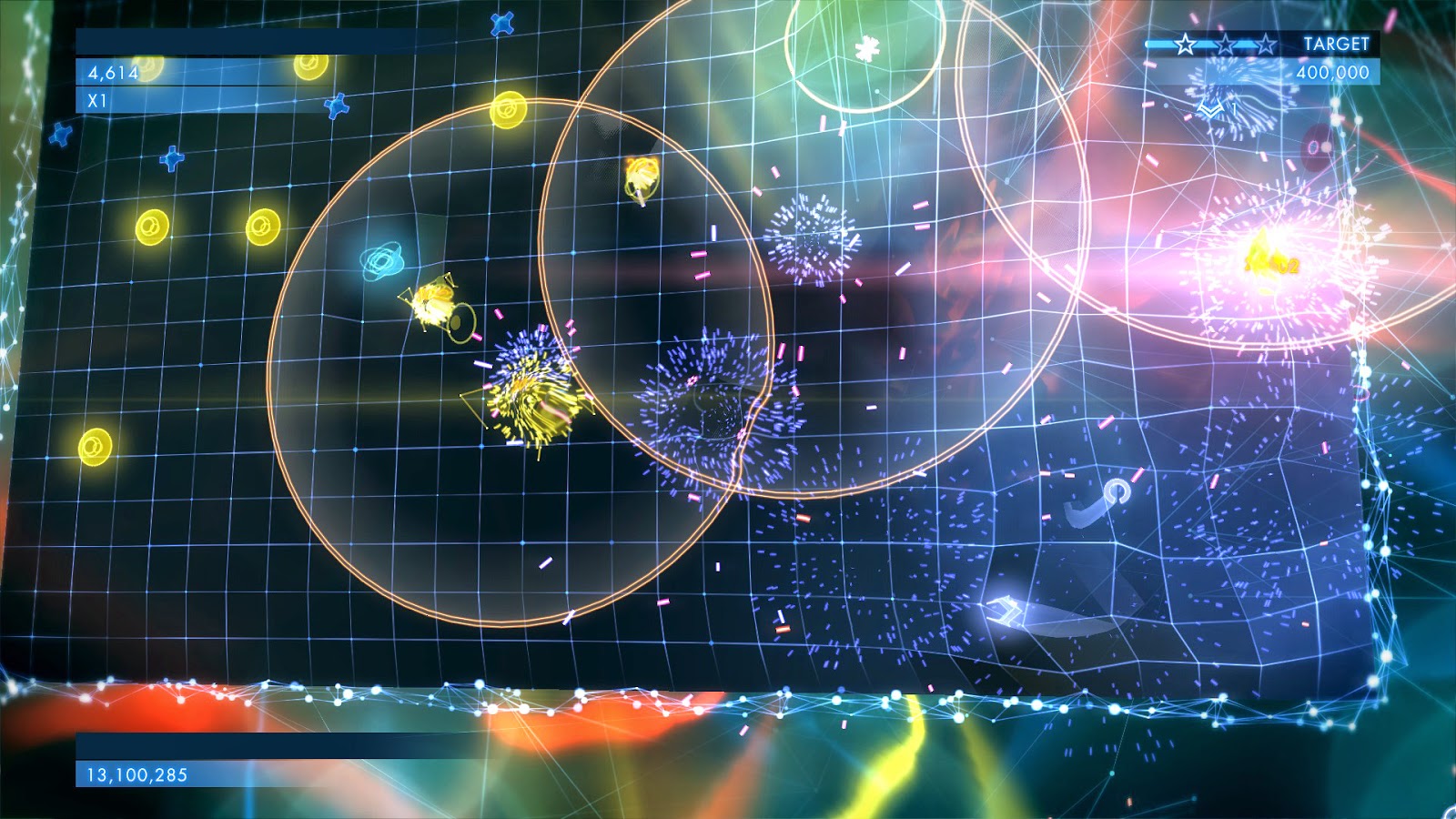 That aside, Lucid Games has nailed everything else about the game. For such a simple formula, it’s a testament to Geometry Wars’ ability to do it better than anyone else that it is still the premier dual stick arcade shooter, even after so many releases and clones on the market. That the latest has been able to introduce enough tweaks to make it an even more pure arcade experience is impressive. And for Activision, this is a truly awesome rebirth for its Sierra brand. This game is worth your money, assuming you do enjoy a healthy challenge.

Review: Pier Solar and the Great Architects (Nintendo Wii U)