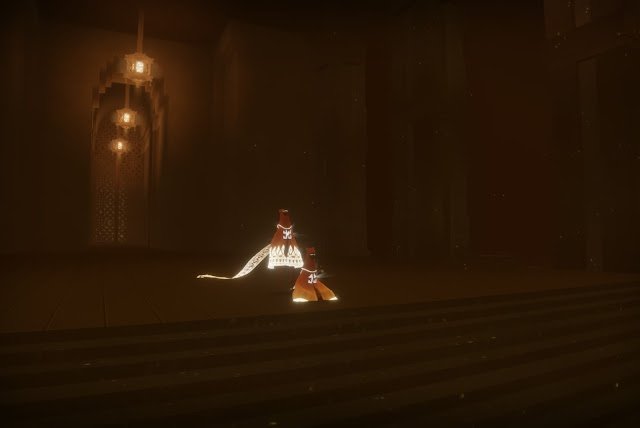 Journey was the indie darling through the last generation of consoles. A simple, emotional experience, it was a combination of graceful, elegant minimalism through its aesthetics, music, and gameplay that made for a accessible, but thematically deep and sincere adventure that anyone, regardless of experience or even interest in games, could appreciate.

It might not seem like Journey is the kind of game that needed a re-release on the newer generation of consoles. After all, the graphics engine was never complex, and never needed a scrub up; a “HD remaster” would have less value to this game than a AAA-game like Tomb Raider or The Last Of Us. But it’s a good thing that Journey exists on the PlayStation 4 because it means it exists on the PlayStation 4; it might find a new audience, and every new player that experiences something this special is a new player that surely – surely! – can learn to appreciate that games don’t need to be high action and gore to be worthy of attention.

At its core, Journey is a soulful tale of communication, and an experiment designed to prove that humans crave companionship and contact, even when the contact is only transient and uncertain. Players are presented with a vast, open world to explore, as they work travel through the last vestiges of some kind of civilization that is long gone on their way to a mountain that is shining to them like a beacon, reliving the story of that civilisation on the way. In itself, that would be a lonely migration, with the only companionship being provided by magic carpet-like creatures that are fleeting and uncaring allies which tend to disappear with the wind, or be savaged by the world’s few enemies. I say it “would” be lonely, because there are other players that can join you in this world, and the interactions with these players are the heartbeat and soul of the Journey experience. 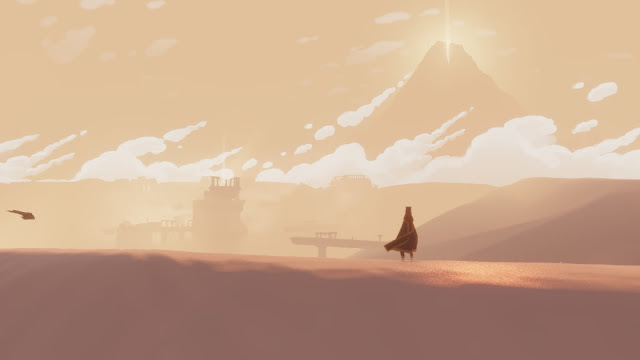 In the distance, I would see one of these other players in my world. Little more than a red speck on the horizon, I was naturally drawn to this figure nonetheless, because it was a rare example of something that was moving and alive among the endless sand and decay. Evidently, this little person felt the same, because he or she (all players have the same avatar, so it’s impossible to even have the slightest clue who you are encountering in the world of Journey) also started moving towards me. We met and exchanged greetings the only way you can in Journey, through a series of “yells”. One button handles all the communication in Journey, with a short press being a quick yelp, but a longer, held down button allows the player to let loose a bellow. There is no voice chat, no keyboard, and no way to even vary the sounds you make. You’ve got a yelp or a yell. That’s it.

Somehow, between the yips and bellows, we worked out that we liked each other, this nameless, featureless wanderer and I, and so we set off on our pilgrimage together. Finally given a chance to get out of the glaring heat of the sun, we headed into an cool, underground world that almost looks like it would be underwater, though we knew it was not, because there was no way to swim. But that initial relief that came with escaping the heat was put to rest, because there were enemies in here. A character is never in danger of being killed, as such, but if they’re hit by an enemy, a ribbon that they have been slowly adding to through their journey by completing objectives is torn and destroyed. This ribbon is important, as it allows characters to jump higher and further, and reach otherwise inaccessible areas.

The enemy hit me. My ribbon was torn. My ally, however, avoided the creature, and was able to keep his/ her long, flowing ribbon. He/ she seemed to find this amusing, as he/ she chirped at me with a series of short yelps. I would almost have been offended except I knew it was my own silly fault that it happened. I would have laughed had our positions been reversed. We continued on. There was an large section of rubble that a person with a long ribbon could easily leap over. My companion did so, but I realised that thanks to my wayward encounter with an enemy, I couldn’t do the same. I was stuck. I knew then that I was going to be alone again, to explore and experience a hostile, cold, uncaring world alone. I let out a sorrowful wail, like a puppy dog tied up and left alone while his owner did their shopping. 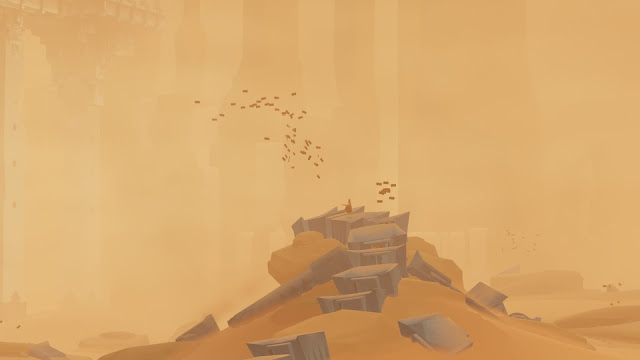 But then something amazing happened. My companion apparently heard that wail, and either out of pity or a desire to maintain the fledgling relationship, he/ she came back over the rubble and, after chirping back and forth a little, we took the long, unwieldy, and boring path together. The one where we couldn’t explore, by my shredded ribbon wouldn’t allow me.

Related reading: The PlayStation 4 has already become a platform for arthouse games. Another great one to consider is Toren.

And so in an odd way it makes Journey the best example of Marxist thinking that we’ve ever seen. The idea that humans, separated from the need or potential for conflict with one another and placed in a truly egalitarian environment in which there can be no class nor discrimination, would be naturally inclined to work together to their mutual benefit is in many ways innocent and naive, but it’s a beautiful thought, and just as Journey is a beautiful game, it has a beautiful heart, and that makes the ending (which I won’t spoil, even though you really should have experienced it by now), all the more heart wrenching, but ultimately beautiful.