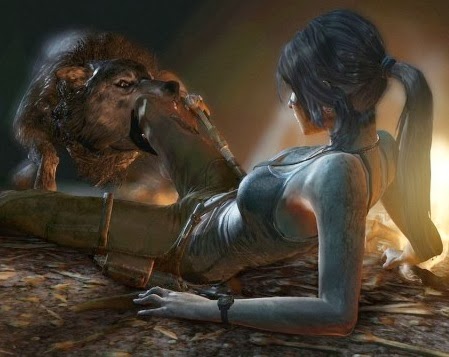 The Tomb Raider reboot is worthy of a great deal of praise. It was quality entertainment when it was originally released on last-gen consoles, and the same remains true for the upscaled PlayStation 4 game. If you are a console-orientated person, and don’t have a high-spec PC, then this is absolutely the definitive way to play Tomb Raider.

But Square Enix has also produced the kind of game that, once the initial enthusiasm for everything that the developers did right wears off, starts to reveal itself to be a more limited game then it should be.

But let’s start with the good. It can’t have been easy humanising Lara Croft while still retaining a character that is identifiable as the one that had the primitive Internet communities of 1996 scrambling to figure out of there was a hidden “nude code”. Where once the character was little more than a virtual blow up doll, this new Lara is an empowered, articulate and intelligent, with a significant de-emphasis on her physical form. She’s no more sexualised now than Nathan Drake, and this makes her story far more interesting.

With that said, the developers have replaced the focus on breasts and buttocks with a love of extreme violence. At every opportunity Croft is being impaled, shot at, caught in animal traps, sliding down rock faces, bumped and scraped. In the cut scenes at least (and we’ll get to the in-game action in a moment), Croft’s story is very much a traditional horror story, and with that comes a certain fetishisation of violence, which is unpleasant in its own way. 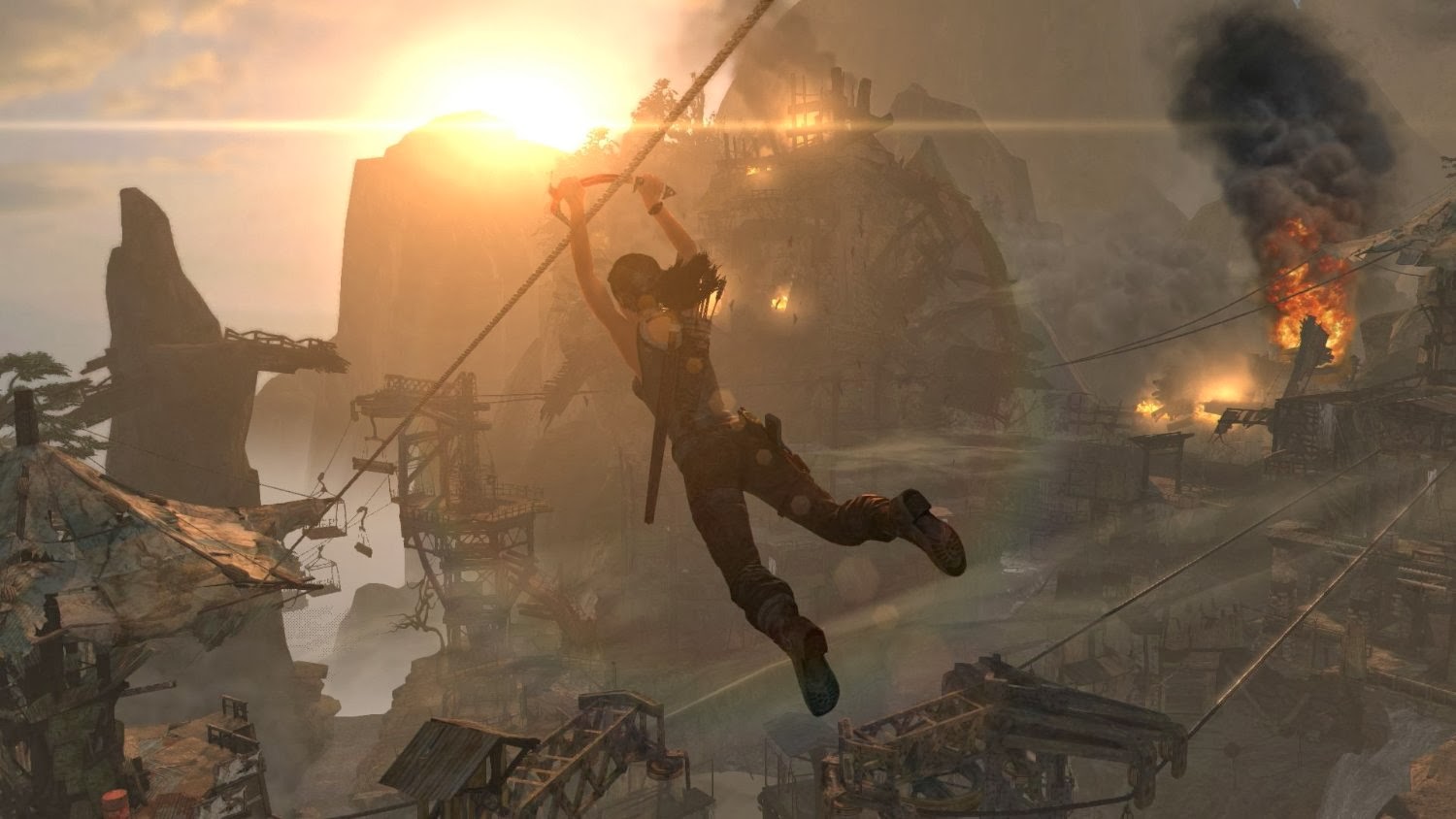 Throughout history, horror has been a genre that metaphorically represents the dominant social and moral fears of the culture at that point of time. As opposed to exploitation, which relishes in blood and sex for its entertainment value, smartly-written horror provides insights into the human condition; it might be uncomfortable to the reader or viewer, but is is very much a legitimate way to explore a wide range of transgressive, but socially important, themes. Dracula is such a memorable character in literature because he was a metaphor for a fear of sexuality. The Saw films (well, the first couple, at any rate), are effective works of horror because they focus in on a fear of the human psyche – place people under extreme circumstances, and see who remains true to the written and unwritten rules that bind our society together.

When horror lacks the social commentary, it tends to dip into cheap exploitation. Tomb Raider isn’t an especially well-written tale, in that it’s a blockbuster action script more interested in pushing players through a series of escalating conflicts. As such the violence does somewhat lack context, and so yes, the game feels a little exploitative in a roundabout manner. This new Croft might be a more realistic human being, but the situation she’s in is nonetheless pure voyeurism.

There are examples of horror games that have transcended a simple love of gore to achieve a thematic depth. Metro: Last Light or the Bioshock games, for instance, offer quite intelligent narratives, while something like Deadly Premonition is so surrealist that it’s impossible to play it without being involved in an intellectual game of cat and mouse between meaning and non-meaning. As well as the characterisation of Lara Croft works, the game itself isn’t quite as dense as those other games. 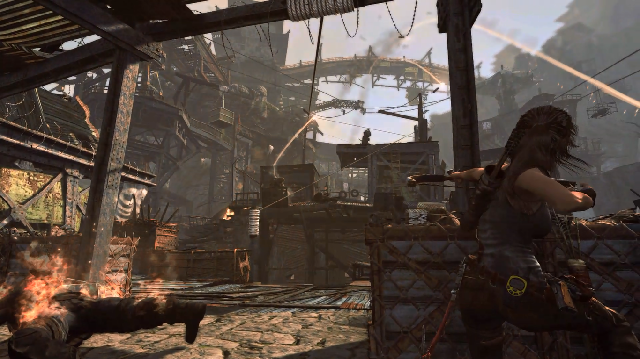 The thematic weakness is compounded by a severe case of ludonarrative dissonance. In the game’s cut scenes, Croft is presented as a very vulnerable individual. She has the mental strength to do what needs to be done to survive, but then is accompanied by a level of emotional trauma that she has to do it. Early on in a cut scene one of the enemies attacks Croft with the clear implication that he intends on raping her. Croft kills him in self defence, and then breaks down into tears.

I’m on board with this characterisation, as it does represent a vulnerable style of heroism that we don’t see all that often – as well as a willingness on the part of the developer to take some narrative risks and introduce some very risky themes from a PR point of view. But then, a few hours into the game, Croft picks up a machine gun, and outside of the cut scenes she’s mowing down hordes of enemies, or earning stealth kills like a hardened veteran assassin with her “makeshift” bow and arrow, and that survival theme, which could have been where some narrative depth is worked into the game, is thrown out the window.

The game’s combat plays out quite well and the developers have done a particularly good job in creating interesting combat situations. The level design is, as far as I’m concerned, on par with Tomb Raider’s clear source of inspiration; Uncharted. But these mechanics, as well as they work, don’t gel well with the cut scenes and broader narrative that the developers worked so hard to build up. 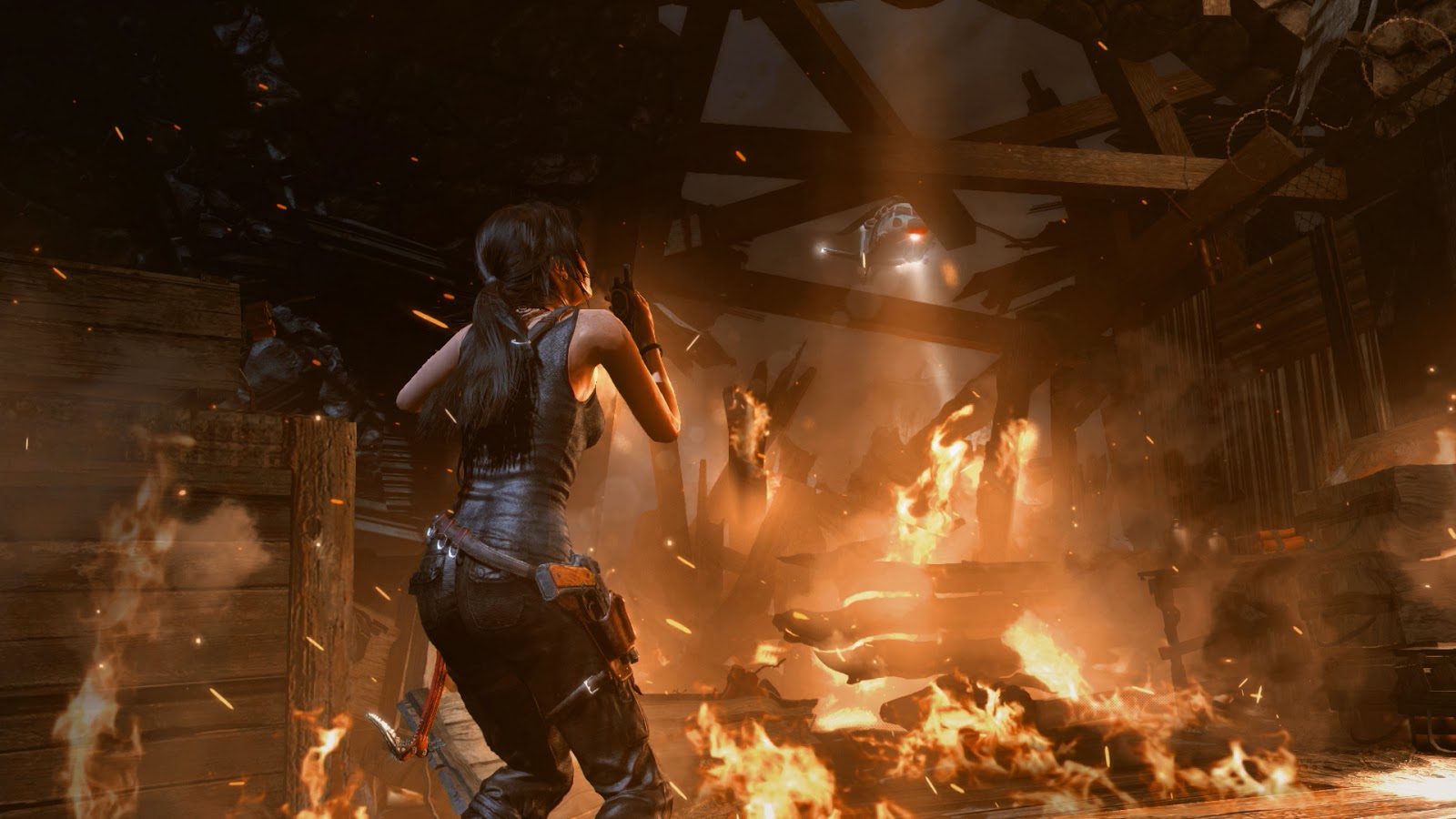 Because of that awkward contrast between combat and cut scene, the fact that the setting of the game is a wonderful play on the Japanese version of Atlantis, Himiko’s capital city, is largely lost. The clash between narrative and gameplay makes the game feel more generic then it needs to be; it feels like an attempt to emulate Uncharted than strike out with its own personality. Uncharted isn’t exactly a poor game to aspire to, but Tomb Raider could have been something even more special than it is.

Thanks to the blockbuster production values, Tomb Raider does work better on the PS4 than on the PS3. Everything looks more spectacular and has more impact as a result. In fact, comparing the PS3 version of the game to the PS4 edition is the perfect way to see just how much more powerful this new console is. In other words as a tech demo you couldn’t really go better.

I was absolutely wowed by this game the first time I played it through because I was paying so much attention to the cut scenes and redesigned Lara Croft was a joy to behold. The Definitive Edition adds a few neat little features like alternative costumes and a comic book describing the events before the game, and I can’t remember that being in the original game release. But having had a year to sit and consider the game’s broader meaning, the second time around the game’s flaws are all the more apparent.