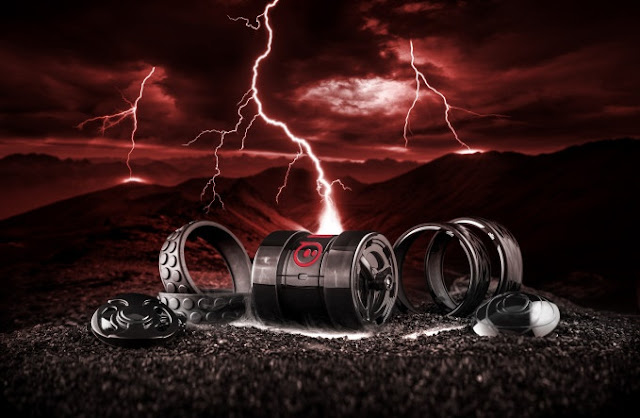 If you’re going to make a robot toy, it’s important to give it a personality. They can be quite expensive, and so to convince people they’re getting their money’s worth, it’s not going to be enough to offer a soulless gadget. It’s got to have character, personality, and something to develop an attachment between person and toy.

Related reading: My review of Sphero 2.0

Back when I reviewed Sphero 2.0, it had some issues, but one thing it undeniably had was a personality. Despite the internal weighting of the robotic components that made it difficult to actually steer things, the cute little white ball had all kinds of colours to personalise him with, and with some steering practice, the stunts and tricks you could perform with Sphero quickly turned him into a favoured toy of mine.

The company has been working hard on its tech, and has figured out how to solve the balancing issue. Ollie Darkside is the result of this. Rather than a ball, the Ollie Darkside is a small cylinder on two wheels, with the weighting balanced across it so that both wheels carry the same weight. The result of this is that with just a few minutes practice, he’ll drive straight when you want him to.
As with the Sphero, you control your Ollie Darkside using a companion app on your iPhone or Android. You’ll start by naming him (a nice touch in creating a personal connection between person and machine, to be sure), and then the app will calibrate the gadget – a process that takes a couple of seconds. And so, about a minute after unboxing the Ollie you’re away and playing with it. The app controls are a little twitchy at first, but you can jump into the settings and adjust those while you’re learning the ropes. With confidence this thing can zip around at an astounding rate (23 kilometers per hour at full speed, and that is fast), and manoeuvre rapidly, and is naturally designed for people to come up with complex tricks and even choreograph elaborate dances of colour and light using multiples of the device.
While I was testing the device it would, very rarely, lose its calibration, and that generally only happened when I started trying to steer it in all kinds of crazy directions quickly. I tended to confuse it when I started crashing it into things while getting it to do loops and stunts around my feet. And even then, again, it happened rarely. The main issue I had with it, from a construction point of view, is its battery life. The official line is that there’s a 60 minute battery in there, but I’d say it’s closer to 45 minutes on a full charge, and that’s quite disappointing. I can appreciate that the robotics and flashing lights that cover the machine are a drain on even a powerful battery, but really a battery that won’t even last a lunch break is a definite issue that needs to be noted (and hopefully addressed in the future).
Technology aside what is somewhat lacking at this stage is the range of games and apps that Sphero boasted. The little ball had all kinds of little AR gimmicky games that, while limited in long term value, added to the fun of the whole experience. There was also some genuine attempts at providing educational experiences through the Sphero by getting kids to hack into it and program it to do various things. Ollie lacks for this range of apps at this stage and, while it’s a lot of fun to play around with the colours that Ollie displays as he rolls around, as a toy his primary function is as a high-tech remote controlled car for the moment. It’s not really an issue when he’s this much fun to drive around, but it would be nice to see the feature set of the Ollie expanded in the future.
Inside the box you also get rubberised attachments that are designed to help Ollie zip around outdoors. It’s a device you want to take outside anyway, since it has a range of 30 metres from the smartphone, and that is about the space that you’ll need to really let it loose. It’s a robust device, so part of the fun is making it do jumps and drift around like a madman, unconcerned it if plunges into something (or gets chased by a dog in the park.
And, as with the Sphero, the Darkside Ollie’s greatest feature is almost hidden – the little wheeled robot is a canvas for creativity in the hands of someone who is, well, creative. The depth of lights that the device can display, combined with its speed and maneuverability makes it a very handy tool for choreography and the like, and I do think that once people start to come to grips with how to work with it, you’ll see cool videos of the Ollie (or multiple Ollies), similar to what we saw with the Sphero.
And so despite its small faults (and the battery, which is hard to forgive), it’s hard to criticise the Darkside Ollie. It’s more than a meaningless toy. Not only does it have a personality and character, which is represented both through its app and in the simple way that it moves around, but it’s also a device that can stimulate the imagination, and frankly that makes it the best kind of toy. It’s doesn’t come cheap at around $120 US, but it is nonetheless the kind of gadget that we need to see more of.
And, most importantly, it’s a significant improvement on the usability of the previous Sphero. We might not yet be at the point where a robot ball can be weighted properly to steer intuitively, but we all know how wheels work, and this little two-wheeled gadget is a true master of precision movement.