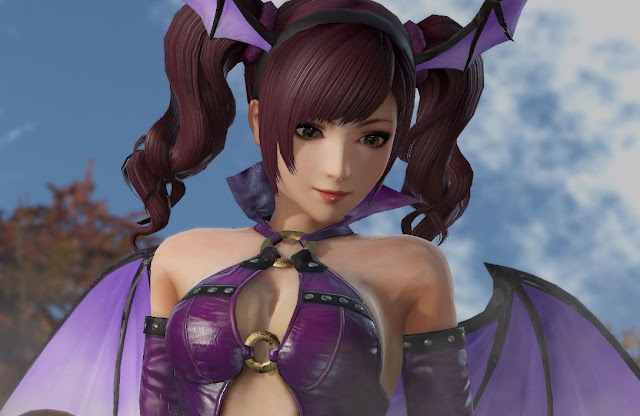 Back when the Nintendo 3DS first launched, it offered a thin range of content and the console struggled as a result. But if there was any one game that justified for me the launch purchase of that little console, it was the original Samurai Warriors Chronicles.
Related reading: Our review of Samurai Warriors 4 on the PlayStation 4.
The game showed off the quality of the 3DS’ 3D technology better than any other launch release, and did a good job of proving the console’s credentials as an upgrade from the previous DS model, too, as it replicated the art style of Samurai Warriors 3 on the Nintendo Wii and managed to keep the hordes of soldiers on screen at a high number, too. Unless you had a PSP, it was the first time that a portable Warriors game had been worth playing.
For some reason we missed the second Samurai Warriors Chronicles game in the west, but Koei has decided to localise the third. And, on top of the 3DS release, it’s now also on the PlayStation Vita. While it’s not quite the quality experience that Samurai Warriors 4 is on the Vita, this one does take a very different approach to the storytelling behind the many characters of the time and battles that occurred through the sengoku era of Japan, and is, oddly enough, the one I would recommend newcomers try first. 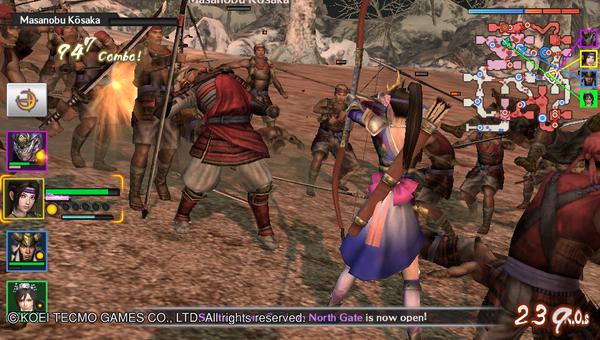 For people less versed in sengoku history, a Samurai Warriors game can be an absolute blur as dozens of names are thrown at you with each and new mission, and you’ll not be quite sure why characters will fight together in one battle and then square off against one another in the next, because the quick introductions that serve as the narrative don’t do a great job in filling you in on the personalities and politics of the time. On top of all that a lot of the narrative is expressed through the battles themselves, where you might be a touch too busy to actually follow everything that you’re being told.
As a result, if your first Samurai Warriors is a game like Samurai Warriors 4, you’ll need to simply accept that you’re going to be confused for a time. You can work through that and slowly come to grips with all the names, events and battles – I did back when I got hooked on the series at Samurai Warriors 3 (with some help from Wikipedia, mind), but it is nevertheless a barrier to entry.
But Chronicles does things very differently; you start off by building a new character from scratch. You build him/her in your liking, name him/her, then he/she embarks on a grand quest through history. From there you’ll participate in the sengoku era’s main battles in order, and between them your created character will talk with all of the major players. As a result the whole period of history is given a far more accessible context, playing out like you might expect to see in an light RPG or similar. Given that the historical context is so important to the appeal of Samurai Warriors, the greater focus on character interaction and personalities is a major boon to the appeal of the game. 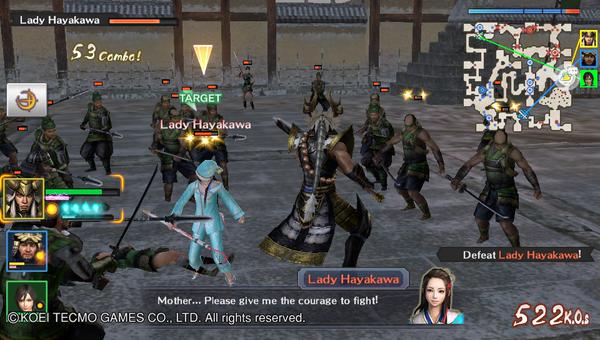 For Samurai Warriors veterans, the narrative context is less important (we are already very familiar with the characters and the incidents that led up to each battle). What we play for is the scenarios and battles. As always from one Warriors game to the next there’s been some tweaking to level layouts and the objectives in each battle, but otherwise the game plays out like a paired-down Samurai Warriors 4. The basic flow of attacks remains the same, but one neat difference that is unique to the Chronicles game is the fact you’re in command of four heroes at a time (the occasional mission might have fewer, or more, but it’s generally four). Their portraits are laid out on the side of the screen and and you can jump between them by tapping those icons, instantly giving you control over what’s going on in an entirely different part of the battlefield. This feature needs to be made heavy use of in most missions, as it’s impossible for any one character to be  everywhere on the large battlefield at once, and yet competing objectives are typically placed all over the place, and are often time limited.
When you’re not directly controlling these characters you’re also able to give them simple commands on where to move around who which enemies to attack, so there’s some light strategic elements in there too. It works better on the 3DS, which makes good use of the two screens, but it’s still perfectly playable on the Vita, and the character models do have the benefit of a higher resolution. Speaking of presentation, the engine is a little limited, with some bad pop-in both of environments and characters, to an extent that we haven’t see for quite some time from the franchise. But the characters each have enough personality and their attacks are spectacular enough that you’ll have favourites, and during the cut scenes and dialogue sequences Samurai Warriors 3 really is gorgeous. Koei’s offering a fair amount of DLC for alternative costumes and the like, and the visual style is detailed enough that I couldn’t resist dressing some of my characters up in sleepwear and the like for laughs, so it’s detailed enough that I care about the character models. The music is spectacular, too, being a great mix of traditional Japanese instruments and a rockier bass. I could listen to the Samurai Warriors soundtracks all day long.
Samurai Warriors Chronicles 3 isn’t an evolution for the series, and after Samurai Warriors 4 it’s hard seeing this one having that much value for any but the most committed fan on the Vita. With that being said, this was predominantly designed as a 3DS game, and is only second game of the franchise on that console. For people who have played the original Samurai Warriors Chronicles it is worth nothing that this is a significantly enhanced game over its predecessor, and that does make it the premier Warriors game on the platform. It’s just that on the Vita there’s Dynasty Warriors and Warriors Orochi to choose between as well. And of course, Samurai Warriors 4. Those are all spectacular games in their own right. 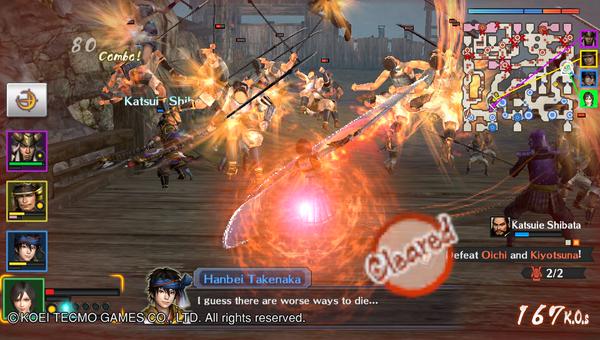 Related reading: On Samurai Warriors and historical authenticity; why the series deserves more respect as historical fiction than it gets.

But for newcomers to the Warriors franchise, I can’t think of a better title to introduce you to the history, characters and action, either on PlayStation Vita for Nintendo 3DS. This won’t be Koei’s game of the year, and will likely disappear quickly from the mindset of even the Koei faithful (after all, Koei releases games every other week these days). But I had fun with it, and I think Japanese history buffs will too.