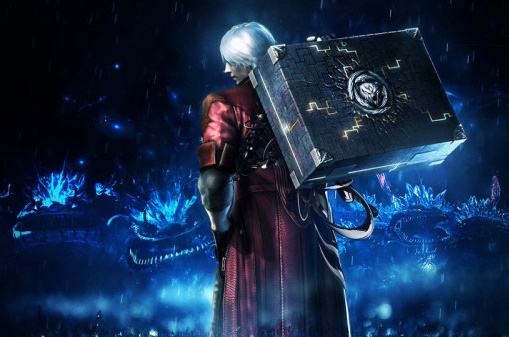 Devil May Cry 4, when it was first released, was a big deal, as the third in the series was a prequel, so it was the first progression to the story since the second title. Now it’s back, and Devil May Cry 4 has been given the Special Edition treatment that, alongside a remastering of its graphics, contains some new ways to play.

This completes the remakes of the original Devil May Cry titles. A few years back Capcom re-released the first three entries of Devil May Cry in an HD Remaster on the PlayStation 3. Graphically all three were impressive while running around in both exploration and combat, however in other areas the remakes were cheap, to say the least, with menus and the like simply grabbed from the PlayStation 2 originals. It was disappointing to see how blurry these were, and how badly they contrasted with the rest of the game, especially considering the menus didn’t properly fit a widescreen with the older aspect ratios. The inconsistent quality of the update marred what could have been a truly great package. Not making the same mistake again, the Special Edition has re-touched everything from the character models and environments to the text and menus so that they are now all sharp and clean, making this a much more striking package from the outset.

Devil May Cry, whether from Capcom’s or in the case of  Ninja’s Theory’s recent take on the franchise, is based on the principle of quick-paced, flowing action with swords and guns mowing through demonic hordes. Of course, Devil May Cry 4 is no different, and the upgraded art and action remains extremely smooth so that, not once throughout the entire game, did the framerate drop. This honestly says a lot as there can be quite a lot of stuff moving on screen. It hasn’t become any easier for developers to maintain a smooth frame rate in these kinds of experiences. 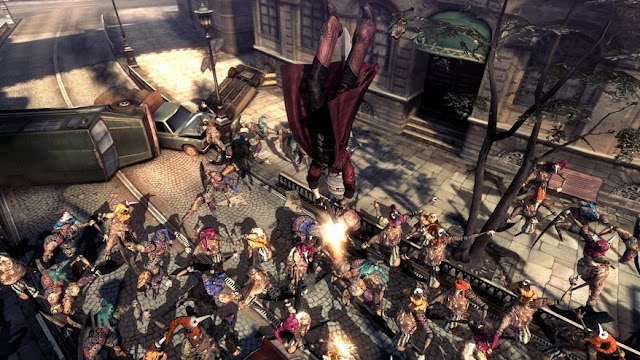 Now, while it is known for it, Devil May Cry is more than just a fast paced action hack and slash. While it may hide it with its one liners and sometimes obnoxious interactions between characters, there is a depth that underpins the action, not unlike what we see in the Bayonetta games. Deviating from the structure of the previous three games and instead following the path of a new character, Devil May Cry 4 stars Nero as he sets out to face off against Dante, who has assassinated the head of a religious order.

Starting off as a quest of revenge, Nero slowly starts to uncover that there is something more going on and while he may not have had blind faith, what faith he may have had was misplaced. Catching up a few times with the “assassin” Dante, he starts to see that Dante has been allowing him to survive these encounters, when he clearly had the power to finish them if he wanted. In turn Nero starts to understand what it is to be more than a weapon and instead starts to see things with a more liberated mind. While it’s a simple story, Nero is a different and stronger person for overcoming his trials and that alone is one of the charms of Devil May Cry.

While Nero was the new main character, he gets incapacitated at a specific point in the story allowing for players to pick up control of Dante for some comfortably familiar demon slaying. Playing with this is where the Special Edition really kicks in as there are two other “story modes” that have been included. The first of the two follows the same dual character flow of Nero and Dante but instead puts players in control of two other characters from the franchise, Lady and Trish. The second is more intense and is a full solo experience with Dante’s older brother Vergil. 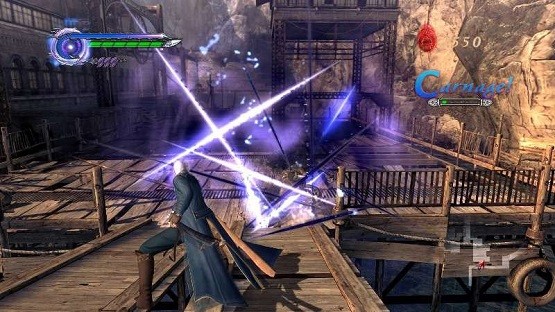 Regardless of which of the two newer story modes are chosen, there will not be any disappointment when it comes to the exploration and combat. Each of the three new characters added all have their own gameplay styles and feel just as unique as Dante and Nero. Unfortunately, unlike the original Nero and Dante story combination Lady, Trish, and Vergil do not have much of a narrative attached to their adventures. Still, each of the character modes have multiple difficulty levels to play through, so there’s a lot of replay value there.

Where things can fall a bit into disorder are the camera angles. Remember how most PlayStation 2 games struggled with the camera as developers learned how to work with three dimensional spaces? Devil May Cry 4 never got past that, even though it was a PlayStation 3 game. In fairness it would have required re-building the game from scratch to fix these, and that would have taken as much work as the development of a new game, but it remains a problem in this Remaster.

Related reading: You can also check out our review of the Remaster version of DmC: Devil May Cry here.

While it seemed a bit weird that Capcom had not originally included Devil May Cry 4 into its HD Collection a few years back, the Special Edition is worth a look for fans of the series on the PlayStation 4 as a stand alone game, thanks to the visual upgrades and new character scenarios.