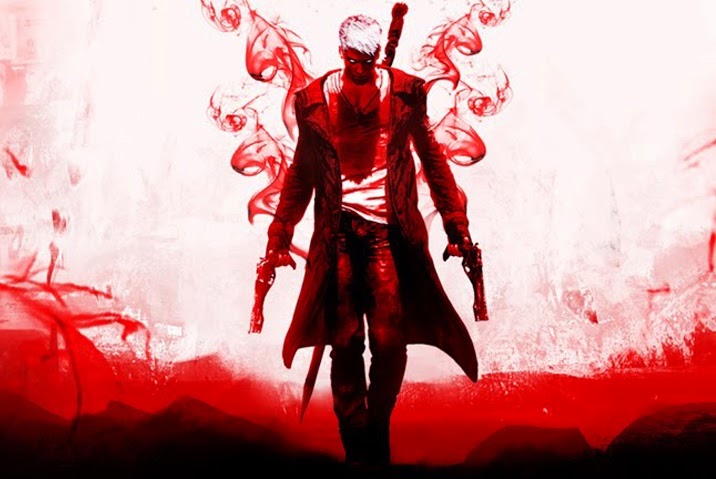 The Devil May Cry series has always been about blending intense action with a story that plays loose and fast with a mix of supernatural themes. The game that Ninja Theory crafted in DmC: Devil May Cry is an entertaining one, but it might have done better under a different name because it doesn’t sit well with the the preconceived notions that many have with the Devil My Cry franchise. That is a shame, because weighed on its own merits, DmC: Devil My Cry Definitive Edition is a journey worth undertaking.

Ninja Theory is one of those teams that builds games that seem to attract cult followings without becoming huge commercial hits. So of course when DmC was first announced, there were many series purists who began to gnash their teeth over the differences they saw – most notably in the lead character Dante.

Ninja Theory takes some familiar names and ideas and puts them together in a different package. This is a team of developers that are willing to poke some fun at itself and the series. The introduction is an over-the-top production that sets the stage nicely, and the whirlwind events and throbbing music set the tone for what would prove to be an excellent action game, but Ninja Theory still found plenty of moments for humour – such as an early incident when high winds blew a white wig onto Dante’s head. He looks into a mirror to stare at a visage much more reminiscent of the original games and quips, “Never in a million years.” This scene is especially pertinent when you consider that that hairdo was one of the chief complains that the series’ “fans” got upset about. It’s almost easy to imagine that Ninja Theory threw the scene in only after the initial response to Dante’s new look, as a way of highlighting how silly people were being over it. 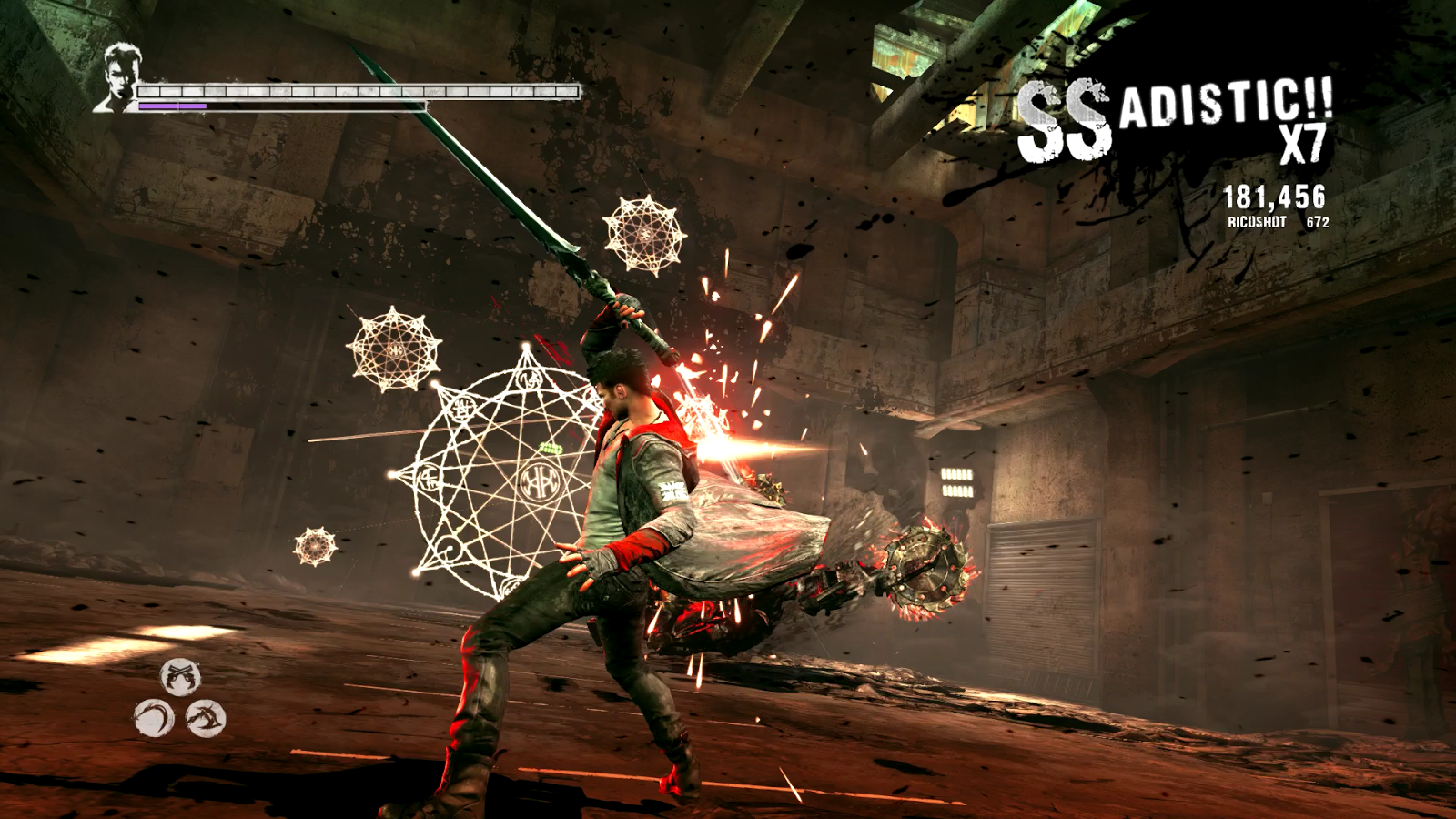 There is beautiful scenery to explore, and serious notes abound as well, reminding one of the work that the team did with Enslaved: Odyssey to the West (one of the titles Matt said he wanted to see brought to the current generation of consoles in an updated version of its own). The locations are quite diverse, with both outdoors to indoors places to experience, and themes ranging from amusement parks to mansions. It is not a long game necessarily, but it is meaty enough to justify sinking time into as you upgrade Dante’s abilities and see the different sights the game has to offer.

Visually it’s certainly better than what we got from the last generation out of our consoles, but those looking for a completely fresh take on this game might be disappointed. In truth DmC’s definitive edition is much more closely aligned to its PC release in terms of graphic fidelity, running at a smooth sixty frames per second at 1080 resolution. It looks sharp, but more importantly it plays smoothly. The combat is where DmC’s bread is buttered. Sliding between melee and ranged weapons and pulling off huge combinations provides a similar, satisfying, dynamism that the Bayonetta games do so well. Garnering huge numbers while bouncing around through the air and weaving a whirlwind of death through hordes of enemies while racking up experience and combo counters feels smoother and more visceral now than it did on the PlayStation 3 or Xbox 360, largely due to the improved framerates.

I have always enjoyed stories that play with supernatural or religious elements, such as the Constantine comics. Dante’s approach to battling legions of demons is certainly less subtle than that of a John Constantine’s, but the war he is engaged in is still interesting nonetheless. Many of the characters have a moral compass that falls into grey areas, so this is seldom a story of about good versus evil, and that makes for more interesting characters. Unfortunately the story itself could have been more entertaining and the dialogue is all over the map, with most of it voiced quite well but held back by occasionally cheesy lines, only some of which appear to be deliberate. Sure, some of this is due to the developer’s willingness to have fun with the material, but too often the remarks fall flat. 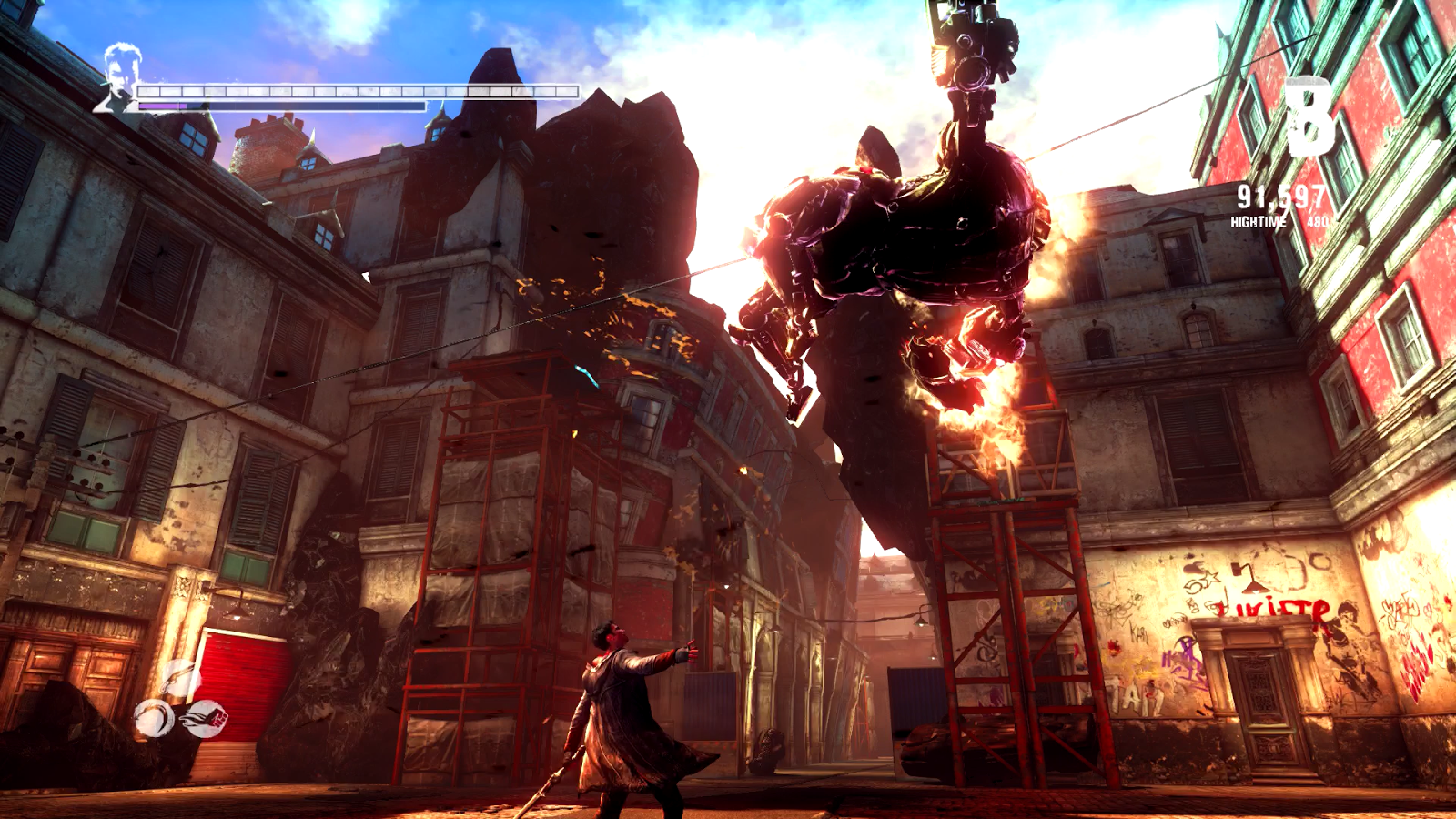 For those who already played this game before, especially on PC, there might be less reason to come back. For all of the good things I have to say about the presentation and the combat, the content itself is largely unchanged. DmC gets some DLC of note such as Vergil’s Downfall and Vergil’s Bloody Palace and the game has an option to speed up play of the basic game while providing some skins for the characters.

DmC: Devil My Cry Definitive Edition provides some replay value in its varying difficulties and secrets hidden throughout the different stages. Uncovering those, unlocking skills and trying to improve one’s rank are the primary hooks to keep players coming back, and the smooth combat system should ensure that they have a good time doing so.

DmC might have been better received had it been built under a different name – at the very least it might have escaped some scrutiny from fans of the original games. That being said, what DmC does provide works well and this latest iteration is the best reason to give the game a chance if you have not yet done so.