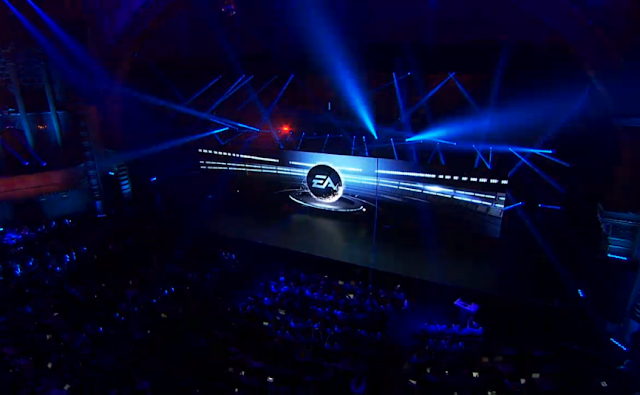 We’re kinda looking forward to one particular EA game. And were we impressed with what we saw (and some of the other games that the publishing giant has on the way)? The full summary below. Be sure to tell us what you think!

Some sexy images of cars as we’re promised that style matters. Need For Speed is back baby.

Five focuses on the game – Speed, Style, Build, Crew (multiplayer), Outlaw (the thrill of the chase). We’re still not sure how this game is meant to be different through. We’re pretty sure we’ve played this before.

But I guess we’ll get to enjoy it soon enough. November 4 release date.

About 10 minutes in and we finally see some on-screen footage and it is a very, very pretty racing game that looks very much like more of that classic NFS action.

We’re being promised more story. “Bioware-style” story. That means, we think, choices and decision trees and stuff. Why EA doesn’t just make a new Knights of the Old Republic game for that we’re not sure, but we’ll take this I guess.

Knights of the Old Republic has a new expansion coming, called Knights of the Fallen Empire. And it’s going to be very story-focused, and free to existing subscribers.

Unravel is EA’s new IP, it’s all about doing something a little creative. It’s about Yarny, a yarn-character.

Developed by a small team of 14 people, this is EA investing in the indies, and it deserves respect for that.

Yarn represents the love and bonds between people. It’s explicitly a game that is aiming to be more than simple fun. We’re being promised emotions and artistry.

So Unravel is a simple 2D physics-based platform that looks absolutely delightful, and I’m getting chills hearing the music soundtrack. It’s all artsy and creative and stuff and Kudos EA for investing in it.

After the first Garden Warfare, EA’s realised there’s room in the market for family friendly shooters, and so they’re back for more.

There are six new character classes, and new maps of course.

A gameplay demo shows off new character classes. Zombies have Imps, who are the smallest and fastest zombies in the game. Super Brains, meanwhile, is a zombie melee class. Captain Deadbeard is a sniper class.

Characters can access big machines and stuff too. The Imp can jump into a massive, powerful mech. Titanfall comes to Plants Vs Zombies, basically.

There is a single player mode in this game this time. Local split screen too. AI bots and stuff for the multiplayer modes when playing single player.

You can transfer all your characters and progress from the first game to the second one.

Spring 2016 release. There will be free content updates too. Whether this means there will be no paid DLC or not, we don’t know.

Rather than show each sport individually EA did the wise thing of showing off NHL, Golf, Madden, FIFA and Basketball and so on in the one presentation bit. We all know they’re coming, no sense to waste much of the show on them.

NBA Live 16 gets a special mention as EA works hard to try and catch up to 2K Games.

You can stick your face in the basketball game now via Game Face HD app. That’s a neat little feature.

Still waiting for EA to announce a cricket game. It has an Aussie CEO and everything. No excuses now.

FIFA Ultimate Team on the Apple Watch is popular or something.

Star Wars: Galaxy of Heroes is a newly-announced CCG for mobile devices.

EA also showed off Minions Paradise. This is a game that’s already available in places (Canada and Australia, at least), but will be released elsewhere later on in the year. But Minions are adorable. Now they’re on a holiday. And that’s adorable. It’s a simple island building game. Think Farmville with Minions.

Getting Pele up on stage was a classy touch, EA. And a good way of doing something about FIFA without showing off FIFA, which we already know all about. Well played.

There’s also improvement to the passing game in the mid field, which has always been the weakness of FIFA games.

There’s also the same “trainer” mode being brought into the game as EA’s other sports games to help new players learn its complexities and all the button presses.

The E3 announcement of women’s teams gets a cheer. This is a truly great feature and I hope EA builds it further in the years to come.

Built in Frostbyte, Mirror’s Edge is so unbelievably pretty.

No levels, no loading screens. This is one very big, open world, seamless experience.

EA showed off some of the in-game action, and this game really does look incredible. The free running looks slick, the gun-less combat is so refreshing for an AAA-game. The dystopia is appropriately creepy.

EA’s trolling now. It keeps tricking us into believing its sports sections are over, but then it pulls out another sports section.

New Fantasy Football mode. I don’t bother with this feature in any sports games, let alone gridiron ones, but other players do like them, so this will be worth another look.

The actual audience doesn’t seem to be that interested either. I get that sports is so core to EA, but they’ve got to learn that yearly sports franchises aren’t really the reason people tune in to E3.

EA starts by showing off how impressive the game looks on Frostbyte, and highlighting the sheer attention to detail and authenticitiy that the team is focusing on capturing.

There is split-screen multiplayer for people that don’t want to waste time on multiplayer. Single player modes too.

Then EA got into the in-game footage.

Footage captured on the PlayStation  really does look amazing. There are hordes of enemies, aircraft flying around everywhere, and so on. It’s just like being in the battle of Hoth. There’s also the ability to transition seamlessly between first and third person perspectives, it seems.

Being part of a team that is working together to take down a walker is surely the most visceral experience Star Wars fans could possibly dream of.

And right at the end watching Luke Skywalker take on Darth Vader was pretty cool.

The game releases November 17, this year.