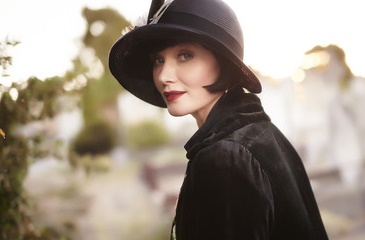 Tin Man Games is a specialist local developer that is best known for its Gamebook Adventures titles. But it has also had some experience with visual novels and its most successful title is probably the brilliant Ryan North’s To Be Or Not To Be.

The company is always looking for new ways to break out from that formula, however, and its newest game is shaping up to be interesting stuff indeed. Miss Fisher’s Murder Mysteries is a popular local TV series, and is based on a series of historical detective novels by Kerry Greenwood.

The game will be called Miss Fisher and the Deathly Maze, and will be a “chooseable-path adventure and visual novel” – which sounds to me to be an extent ion of the Tin Man Games tried-and-true formula (and it is using the Gamebook Adventres engine). The narrative was summarised in the press release as follows:

Becoming the independent, feminist super-sleuth, players will guide the heroine on a modish dance of adventure, murderous mayhem and mystery around the world. Armed with her golden gun and with her companion, Dot Williams, in tow, the pair chase the trail of the insidious Murdoch Foyle. Foyle has escaped the gallows once again, with Phryne on his trail. Can Miss Fisher and Dot decipher his clues and stay on his trail? Or will they be tricked into pursuing a false lead, causing the trail to run cold? The player’s wit and ingenuity will help our heroes crack the case!

The narrative is being written by Luke Miller, the mind behind point-and-click adventure title My Ex-Boyfriend the Space Tyrant. The game is also being developed closely in collaboration with Every Cloud Productions, the producers of the Miss Fisher TV series, to ensure it remains authentic for fans.

It’s good to see Aussie art and IPs developing a presence in games as well. There’s much more to our culture than cricket, after all. And I can’t think of too many other Australian narratives that have been turned into games yet.

Next let’s make a game of And The Ass Saw The Angel. Mind you, it’s probably be ironically banned in Australia, but it’s be awesome nonetheless.