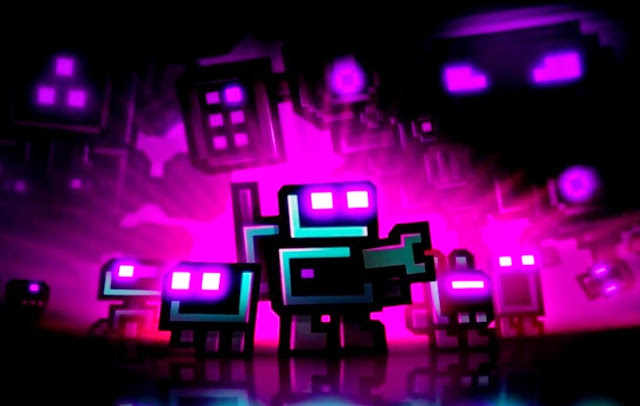 Ultratron is a flashy twin-stick arcade shooter that gives players the goal of nothing short of complete vengeance. Taking control of a robot, players set out to eliminate its own kind after their total annihilation of the human race. How far he makes it against the robots of the apocalypse is entirely in your hands.

Our robot’s quest for revenge takes on some interesting elements as he works his way through hordes of enemies. Each destroyed enemy drops money, which is critical to grab in order to buy upgrades and enhancements at the end of every stage, and this structure immediately creates some tension, if not stress, in the player. Not only does the money being dropped need to be quickly collected as it can disappear from the play field rather quickly, but every attempt to collect it runs the risk of bringing the robot to destruction as new enemies can spawn right on top of where the destroyed ones were with no regard to if you were standing there or not. I would call them rather inconsiderate but hey, that’s war.

Upgrades are rather interesting and come in three forms. The first of these are common power ups which a particular enemy will drop. These have a set duration, but offer a small boost to your ability to wreak havoc. Examples of these powerups provide faster fire rates, dual to triple streams of projectiles, and ricocheting shots. Going out of way to acquire these is recommended as it levels the playing field against the hordes that would do our Robot in. 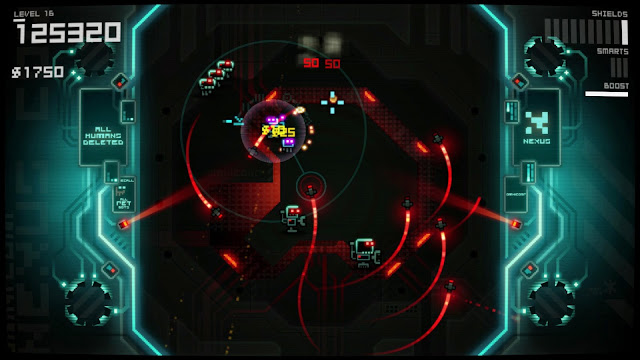 The second and third kinds of upgrades are passive and “active,” and are both bought with the money acquired on every stage. The passive upgrades give players some extra extra help in the form of smaller robots that follow our death machine around for extra firepower as he lays out waves upon waves of destruction. There are also upgrades to the main weapons that will help break through tougher shields and armour as the stages progress. “Active” upgrades, meanwhile, are things like shields and massive bombs that are both expendable and, as powerful as they are, are a precious resource.

The controls and the interface both work exactly as you’d expect to see in an arcade of old, with a metal box with dual joysticks and a few buttons to mash on. Each set of stages prior to a boss has a background colour scheme but in regards to a level design there is none. The battlefield is a simple square, designed to be as distraction-free as possible to allow you to focus on shooting up hordes of enemies.

Related reading: For an alternative to Ultratron, dual-stick shooter fans could also check out Geometry Wars 3. Our full review.

Ultratron is a good arcade game with the simple goal of surviving as long as possible in order to avenge the human race and earn a good score to brag about while doing it. While it might not do anything we haven’t seen before, it is a fun time for those that love the retro style.

The Sunday screenshot gallery; May 24

gumi Asia; on Chain Chronicle’s worldwide success and the need to be different to Japan