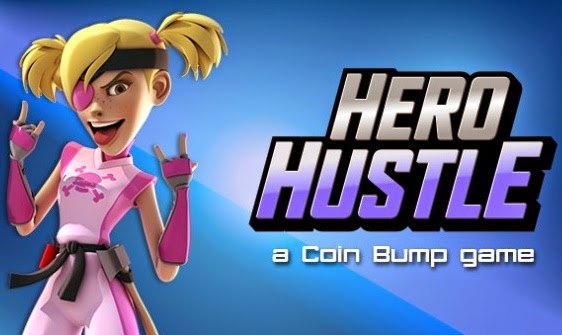 The folks over at Coin Bump must be doing some strange things in their office to gain inspiration for their games. Hero Hustle recently launched on iOS, and it’s inexplicably flashy and busy and cool and addictive all at once. Read on as I attempt to explain what may be inexplicable

The graphics and sounds are as one may expect from a game operating on iOS. The artwork is crisp, clear, and brightly coloured. Hero Hustle looks amazing on a retina screen, and still quite good on a non-retina one. The clean graphics are complimented by the music, which somehow manages to combine a sense of heroism with video game nostalgia. The background track is upbeat with a hint of electronica. The sound effects, much like the music, are simultaneously contemporary and nostalgic; they hark back to past versions of Tetris while not sounding like a copy of old familiar tracks. Every so often, an audio track prompts you. “Get ready!” you are warned when a new game is about to begin. “We can’t all be heroes,” the voice encourages you after a game ends.

Hero Hustle is, at heart, a match-three game. Colourful blocks drop at intervals from the top of the screen, and you must clear blocks fast enough in groups of three or more to keep room for more blocks to fall. When you rack up enough points you can summon a hero that will completely clear the screen, resulting in a big score boost as well as some breathing room when it comes to the rapidly dropping tiles. The confusing or difficult part is what three pieces to connect. The different colours of the blocks actually serve no purpose aside from creating a distraction. Most pieces have a number on them (between 1 and 9). By a simple swipe of the finger, the pieces can be connected by increasing numbers (ie. 1, 2, 3, 4) or the same number (ie. 5, 5, 5, 5). Some pieces flash a rainbow gradient; those pieces are like the “free” square in the middle of a Bingo board, so they can take the place of a missing number in a sequence. 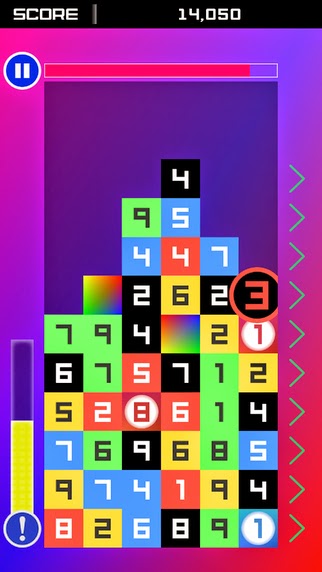 Unfortunately, the gameplay seems a bit muddled despite the basic premise. You can also tap to slide rows of numbers left or right, but the speed at which new blocks fall creates such a small window of time that sliding the rows is less beneficial and more something to forget about while desperately trying to find matching or sequential numbers. With so much going on at once, it would be extremely beneficial to be able to replay the tutorial – an option that, unfortunately, is not available. In fact, when the app is opened the game is instantly launched with no menu of any kind; a home menu would aid with the game’s flow and allow for somewhere to view the tutorial or change options outside of the game’s pause menu.

Despite the flaws, Hero Hustle remains oddly addictive. One welcome feature in the pause menu that adds to playability is the ability to record a game, either with or without a cam on the player; I can envision watching videos of great runs to observe what could enhance my skill. I find myself constantly trying to beat my high score, telling myself “just one more game” until I can no longer see anything that isn’t a colourful square containing a number. Yet even after all this time, I haven’t even encountered something mentioned in the game’s description: bombs! I have recently switched from playing on my iPhone to my iPad Mini, as I have unfortunately inherited my dad’s chubby fingers and they impair visibility on the smaller screen; as a result, my scores are slowly getting better, and so my hopes are high of encountering the much-feared explosive devices.

Hero Hustle seems like it could be the result of Tetris taking hallucinogenic drugs and playing Sudoku printed on rainbow paper while kung fu films run in the background. Maybe it’s not so inexplicable after all. There is so much going on at any given point, but I still can’t stop (and won’t stop) trying to fight my way to the top.