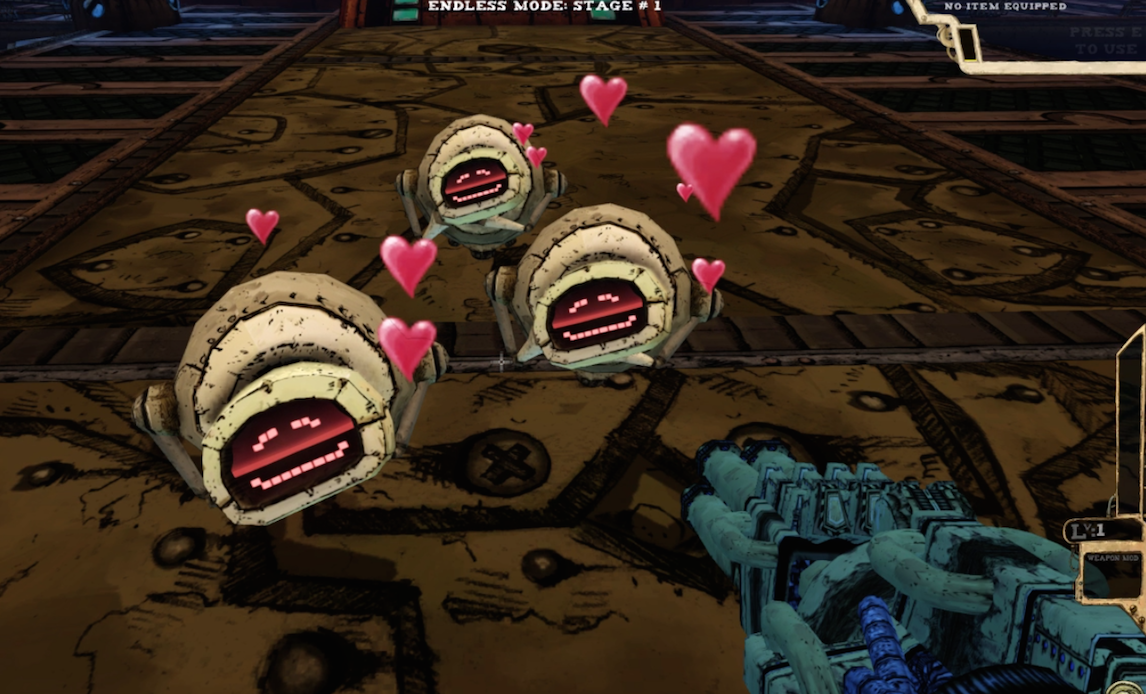 Within the first twenty seconds, small cute hugbots emitting pink love hearts float affectionately towards you. Peaceful and placid they just want to be your friend. But you, merciless to the extreme, aim and pull the trigger, scattering their parts into a hailstorm of loot. This then is the intent of the Tower of Guns laid bare, ‘if it moves, kill it’.

Terrible Posture Games, the indie studio behind Tower of Guns, has developed a roguelike game with one simple aim: make it to the top of a tower crammed full of hellish guns. On the way you will be accruing power ups, finding secret areas, and abusing a litany of ever ambitious mods and buffs to create an uber-weapon that dominates any defence the tower can throw at you. And, it throws a lot. Tower of Guns is crammed full of mechanical behemoths like Doctor Turret, a multi-sectioned rotating turret that stretches floor to ceiling; MamaSpinbot, who serves up damage through sawblades and spikeball dispensers; and The Longhorn, a faceless robotic bull’s head that charges and shoots projectiles. As chaotic as they sound, all these enemies are perfectly realised. Rotating, ramming, and exploding, they are huge and bombastic and dominate the gameplay space.

Though the game’s playable arenas are vast in scale, Tower of Guns gameplay length is designed to be anything but. The developers describe it as “a lunch break game. If you’re going to win you could do it over the lunch break.” This should not be taken lightly. Many of the levels can be run through in a matter of seconds, although this will leave you vastly underpowered when confronting end of level bosses. The real carrot of the experience then is in the game’s random level generation. 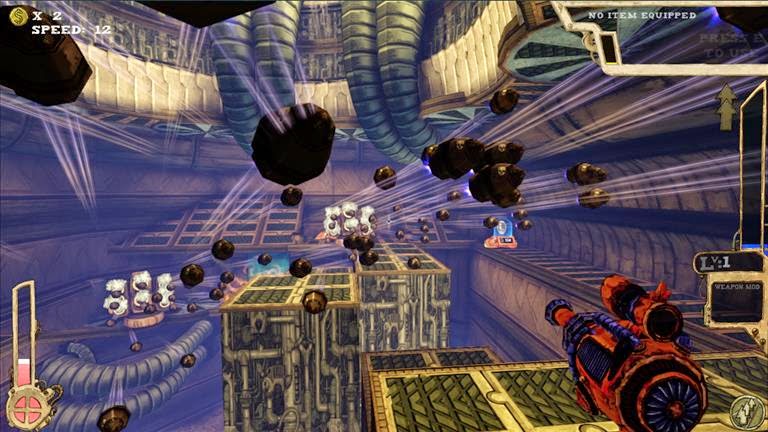 Rather than just a few platforms switching around, or added levels in the same theme, there is a complete transformation of landscape and terrain upon each iteration. Rusty metallic meat grinders, whirring gears, multiple secret areas, secret walls, expansive domes, teleportation columns set amidst giant monolithic structures, all switch in and out at each new run, creating rooms that always seem fresh even if the mission is always the same. After around 30 runs, some of the levels do make a reappearance, but there is enough variety there to keep the player from the fatigue of familiarity. The distribution of platforms and the ‘engineering factory’ like textures create a distinct claustrophobia about the game, an impression of thousands of tons on metal pushing down upon you, ever shifting and unpredictable.

There’s also a tiny hint of Bioshock’s Rapture in the weight and feel of the place with its oppressive, and claustrophobic metallic design, airlock-like sliding doors and unnatural lighting. These arenas of danger, however random in design, guaranteed for me a certain wonder at their scale and scope. Not since Portal 2 with its clever use of level space, have I seen a game that creates such dramatic verticality of movement. In Tower of Guns, titanic spaces stretch into echoing voids; pools of molten metal stream down from vents; and gigantic ridged pipes sit amongst a tiered landscape of rotating cogs and twisted metal walkways. Like Portal, Tower of Guns offers beams of light that transport you upwards, blue coloured areas that enable you to continually bounce, and blocks of gel that slow or increase your speed. Unfortunately here, these environmental curiosities seem difficult to take advantage of due to the speed of the action. Unless absolutely necessary, it’s best to avoid them completely, if you don’t want to waste precious health from fall damage.

When enemies die they explode in fountains of loot that contain mods, abilities and badges. Collecting coins will allow you to purchase buffs locked behind energy fields. Collect enough blue chips and your weapon automatically upgrades. The guns range from pistols to plasma machine guns, industrial engineering devices that fire saw blades to devastating singularity guns. At their most powerful (level five), and with the right mods, most guns act in a similar way, spraying out a blanket of white hot projectiles, a sort of shotgun/rifle/RPG hybrid all in one, that decimates enemies in their path. The success of your journey after level five is therefore found in the combination of character buffs (badges) you pick up; the special abilities you find; the playstyle or perk selected; and the weapons mods you choose to use. Badges such as speed, jump height and health, all stack. Weapon mods and special abilities are interchangeable, although only one of each is possible to have equipped. There are also fifty different special abilities that can be collected and a total of ten different guns to unlock (two being accessible immediately). The other eight are hidden behind challenges such as ‘destroy x amount of enemy types’ or ‘find five secret areas in a single level’. 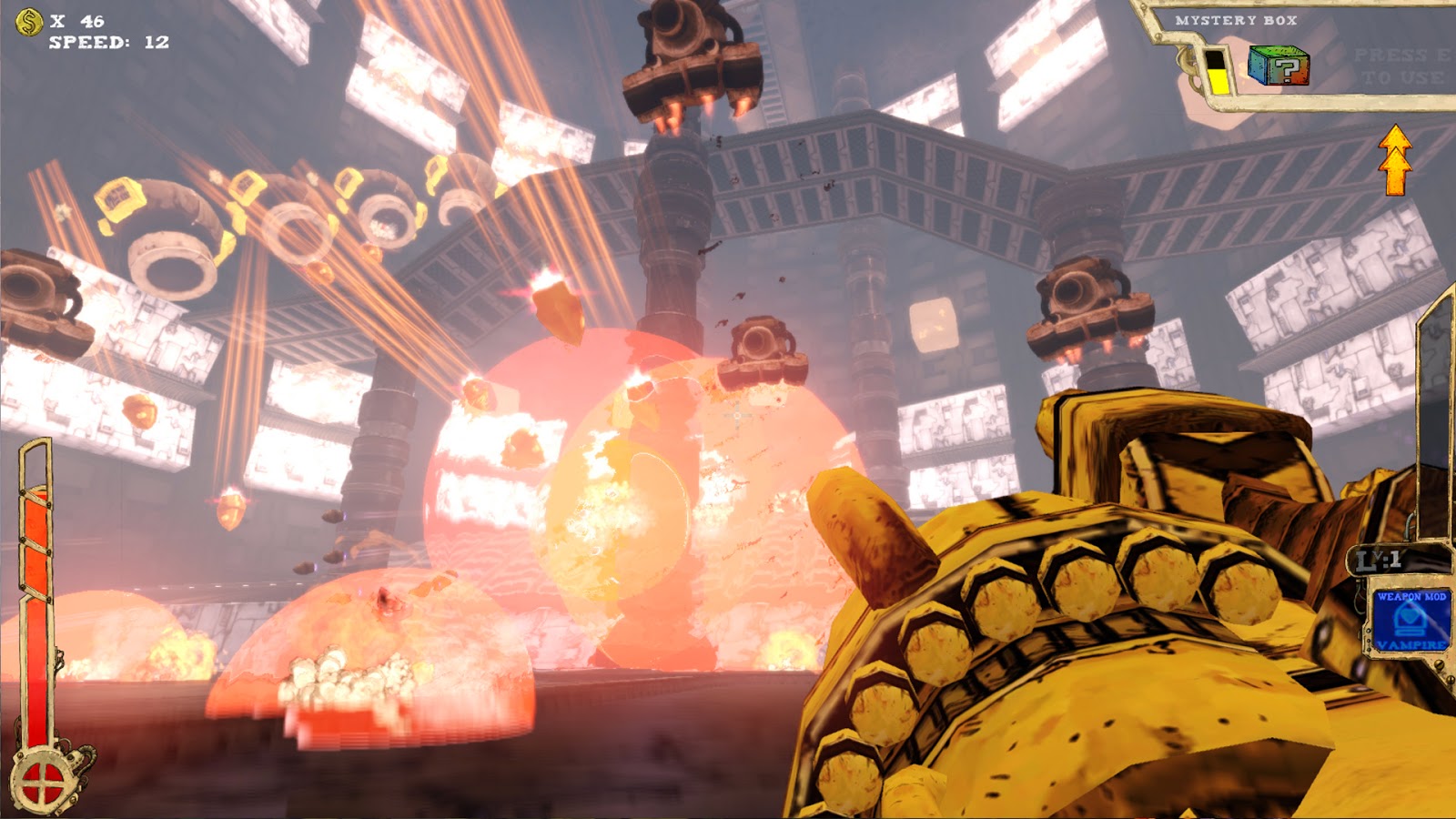 Less successfully the game randomly assigns your character a personality and motivation from a number of whimsical character stories. You could be one of a group of disaffected professionals on a motivation training course, or a thief in the pursuit of treasure, or the husband who has gotten his wife lost by reading the wrong GPS. The personas however seem superfluous, (the dialogue boxes get totally lost in the action) and they never change the way you play, neither do they inform how your character handles the gun. This is a pure FPS with little need for a backstory and that’s okay.

Tower of Guns is gorgeously presented in cell shaded style that would look at home in something like Borderlands. The visuals are so striking that even amid an insanely frenetic gun battle, and in the dark recesses of its most lifeless metallic level design, Tower of Guns looks beautiful. This is partly down to the immense scale of the guns, their firing animations and the slow trajectory of bullets and rockets that trace smoke and steam across the screen.

As a free download on PlayStation Plus this month, the game is a must have. If you enjoy destruction mayhem, and like to dive in on the action at a moment’s notice, Tower of Guns is a worthwhile addition to your PlayStation library. At the recommended retail price, however (despite the replay value) players may find themselves hankering for a little more content for their cash. If Terrible Posture Games ever developed Tower of Guns into a longer game with a strong narrative, and diverse challenges, it may have the start of something amazing. 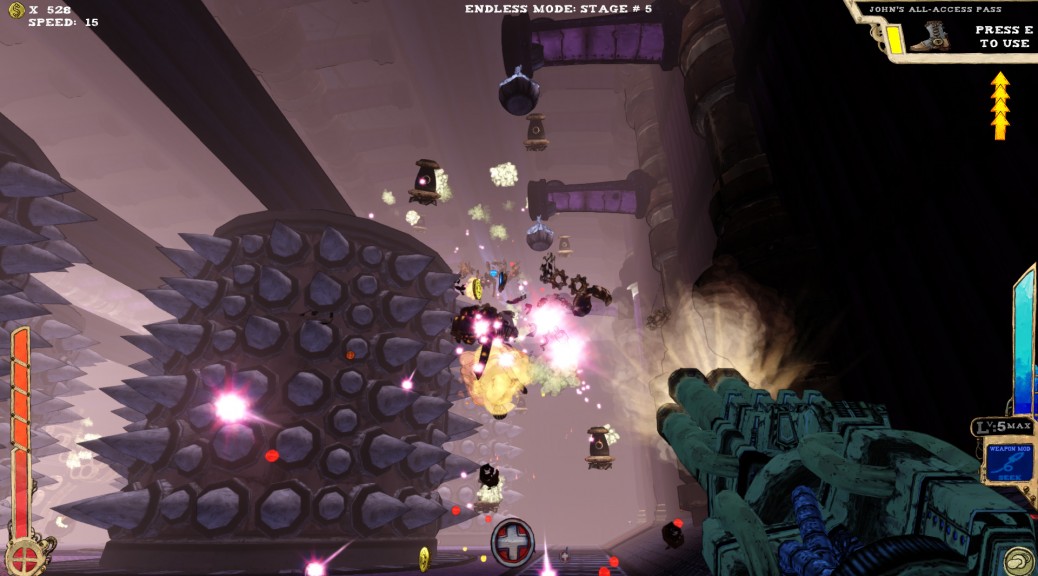 Ultimately as it is, Tower of Guns is best played in short bursts, with your finger never leaving the trigger. Creating a sea of destruction from an unceasing stream of pulsating projectiles can become utterly dazzling, especially since the 60 frames per second that rarely drops. With infinite ammo guns that need no reloading, Tower of Guns is an immensely satisfying (albeit brief) gaming experience that is as engaging to play, as it is stunning to look at.