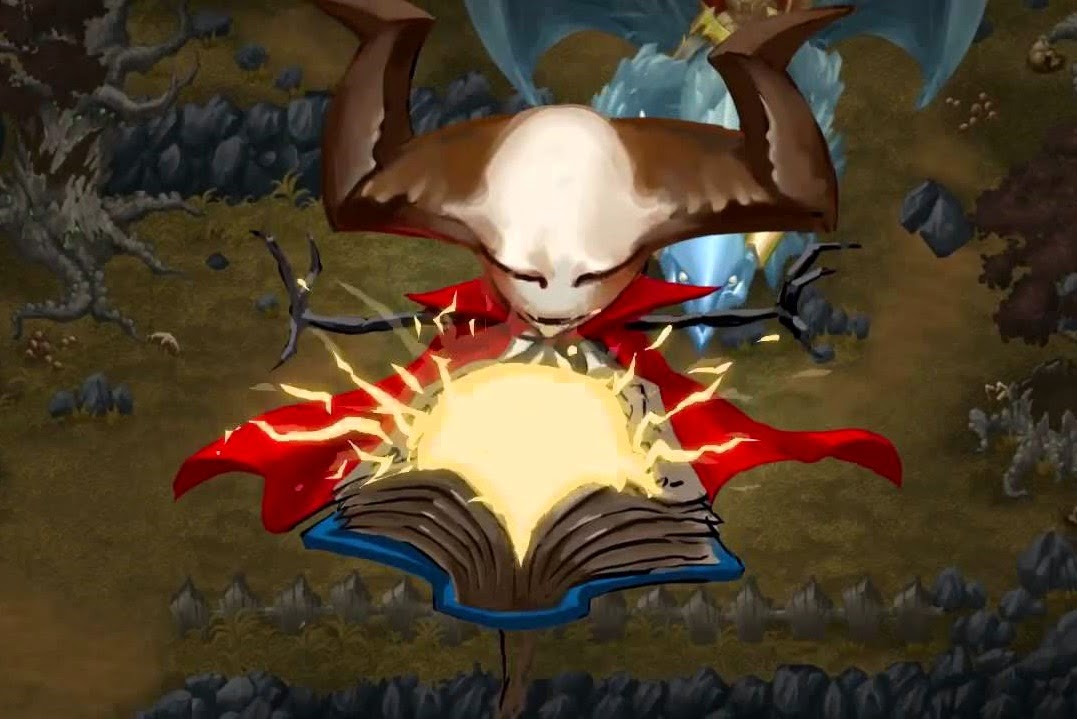 We rarely get to play unfriendly characters these days in video games, let alone evil genocidal maniacs. Rack N Ruin, a top-down Zelda-esque indie title with a bit of SHMUP thrown in, hopes to present us with just that opportunity.

But instead of handing us the reigns of a charismatic overlord, LifeSpark Entertainment task us with controlling an overworked demon slave: a hellish loser with a horrible boss. Dissatisfied with Rack’s previous world-destroying efforts, his master Ruin, orders Rack to corrupt a nearby asteroid belt, whilst secretly sending him to his doom on a world that strips him of his powers. Eventually, after obtaining a fireball spell, and what looks like a rubberised bat wing, Rack aims to prove himself to Ruin by turning everything he comes across to ash.

Rack initially appears to be representative of Ruin’s evil bidding. He seeks to betray all the ‘good’ citizens of the world and gradually turn their lush landscape into a decaying and foetid forest. His antagonistic nature however is vastly underwhelmed by the evil behaviour of other characters in the world. The game scripts Rack with a high pitched giggle in dialogue scenes with passive village folk that bizarrely you are unable to kill or attack. It seems that Rack’s evil genius is relegated to bandying insults to village idiots. 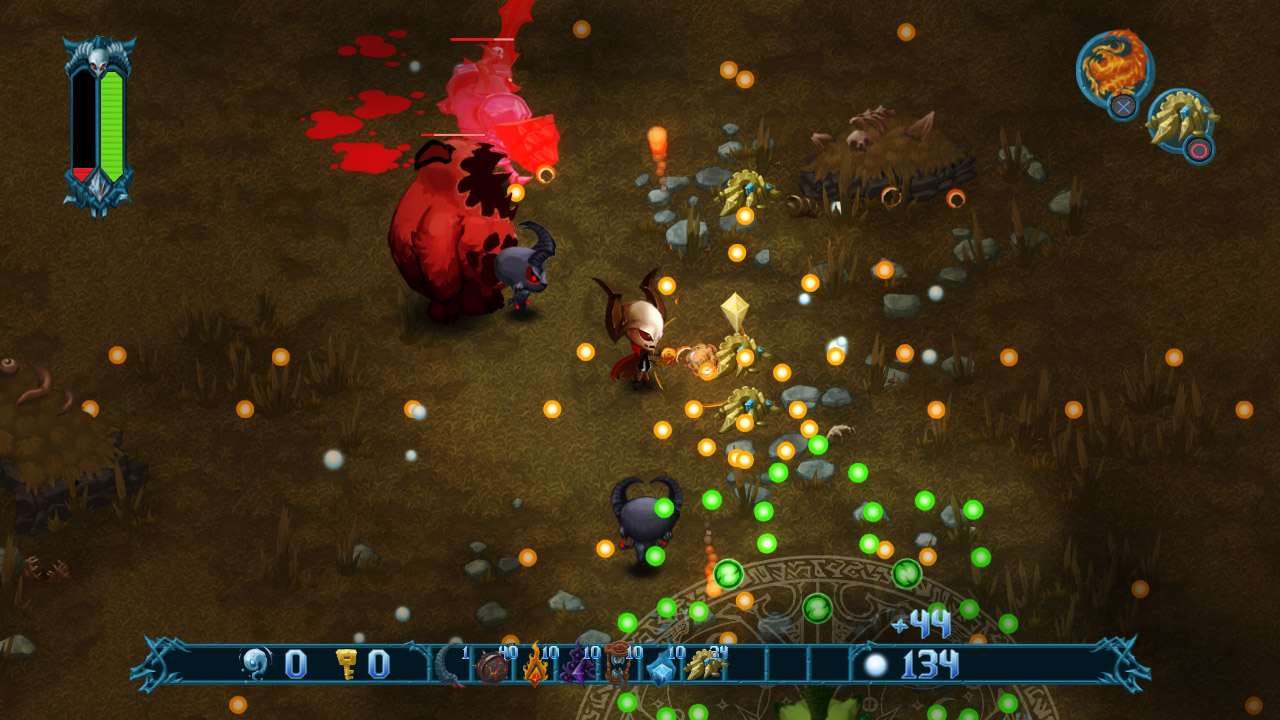 This is also a hostile world, and the murderous Rack is, relatively speaking, far less evil than many of its wild inhabitants. Most of the enemies Rack encounters actually deserve to be killed, in other words. Blood sucking bunnies that launch razor sharp teeth at Rack’s throat, shamanistic cat people who attack him on first sight, and bloated giant ticks that leave exploding bombs, are all hardly representative of a land of purity and peace. Even benign puddles of goo will eat Rack alive should he stray too close. It also feels too strange that an all-powerful demon needs to use a ‘shop’ to purchase buffs and special weapons (even if it is with the souls of the corrupted as currency). All in all, this is not a story about a demon destroying souls. It is a story about an underdog trying to survive against hope. Consequently Rack feels more like a hero than a hell raiser.

Whilst the promise of all out destruction is often alluded to in scripted exposition throughout the world, it never quite materialises. The real devil of the game is in the detail. Combat is a simple case of locking on to individual enemies and picking them off until the screen empties. There is some sweet satisfaction to be had by whittling down the health bars of the hardier creatures. It’s certainly not Diablo by any means, but escaping within a hair’s breadth of health after eliminating a charging attacker is often enjoyable.

The real problem however is that enemies will respawn immediately upon Rack’s exit and return to an area, and as backtracking is essential to progress through the game, clearing a path across the world becomes a repetitive process. Whilst boss battles require the development of specific strategies to survive, regular enemies involve a level of evasion that unfortunately the character animation struggles to pull off. Rack’s speed and manoeuvrability can often render him inept and sluggish, despite a buff which can occasionally increase his speed. The combat is made all the more difficult when enemies can fire from off screen, before you are able to see and damage them. In many cases, you are continually pushed off screen by this blind fire. 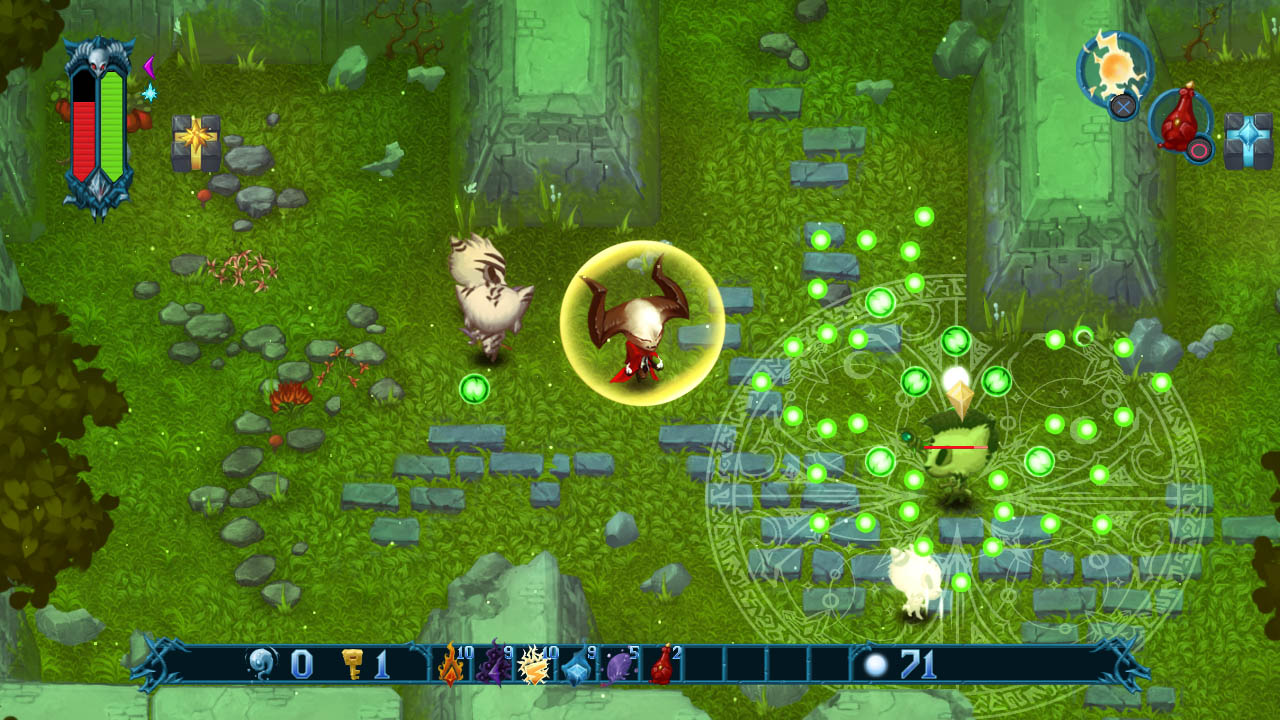 Most encounters with enemies consist of moving close enough to aggravate them, and then backing up as you fire defensively. It can too often feel like you’re that guy who can only fire parting insults as he’s booted out of another bar. When you do die, everything resets and Rack resurrects back at a shrine, erasing all progress that he made. If he dies during a boss battle he resurrect at the start of the boss battle, unable to purchase any power ups or refill health potions that he might need to have a realistic chance of success. This makes the battles progressively more difficult each time you die, as your inventory is slowly exhausted with no recourse to refill. As a fix, the game perhaps would have benefited from two save slots separating the auto and manual save.

When not overwhelmed by enemies, Rack is fun to move around in the world, and his character animation is quite charming. The hand-drawn graphic style featuring a bright colour pallet with blended chalk lines, reminds you of games from the Amiga and Atari era of the 90s. It is an interesting aesthetic, which uniquely doesn’t resort to the overused pixelated style of many retro indie releases.

Whilst finding secret areas may yield yelps of excitement from the avid explorer, in general there is a sad aimlessness to the top down ‘open world’ level design. There are no objective markers, no quest objectives, no directional arrows and no sense that the different spaces really connect to each other. I spent hours wandering between a scorched earth theme, a forest theme and a scorched forest theme with no real clue about what I was doing. We don’t need the designers to play the game for us, but a little nudge here and there wouldn’t go amiss. Each level is full of hard to find secret areas, but the loot within never feels like it is a reward worth the risk. Rack does have an ability to use telekinesis to solve puzzles and move bombs and blocks that blow up enemies. It is an added dynamic that keeps things fresh. Sadly the opportunity for its application is rare. Perhaps, if there had been a higher frequency and complexity of switch puzzles, there would be a pleasing balance struck between the awkward combat and unending exploration. 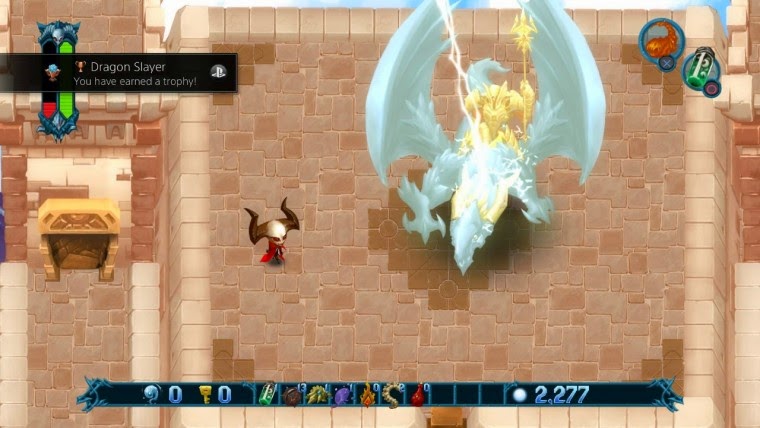 Overall Rack N Ruin is a game with much unmet potential. After clearing out the same area for the twentieth time, players will realise just how little effect they have on the gaming environment. No single enemy becomes interesting to corrupt or destroy when it is immediately resurrected by walking off the screen and returning. If only there had been a mini-map of some kind to keep track of how the world’s individual spaces connect, exploration would be more gratifying. If only the combat had been tweaked to allow greater chance for offensive rather than defensive attack, it would have been more engaging. It all adds up to a game that feels as though it should have been more widely tested before release. There is a kernel of greatness there, but it is hiding within a thick shell of nonsensical game design. Put simply the game doesn’t ‘play well’.