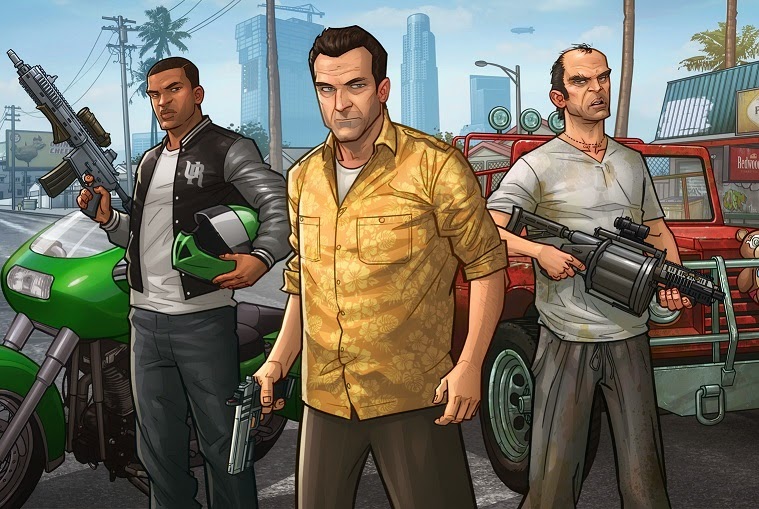 I was driving around aimlessly in a stolen black Vapid Bullet, when I collided against a white Benefactor Panto (which had appeared out of nowhere). My car hit a pole and stalled. When I stepped out of my vehicle to inspect the damage, I found out to my horror that the driver of the Panto was dead. He had slumped over, head resting on the steering wheel, looking unnervingly realistic in his proportions and position. For the first time while playing a Grand Theft Auto game, I was engulfed by a terrible wave of regret, remorse and sadness. For the first time ever, I felt honestly sorry for my reckless action.

Related reading: You can also check out our review of the PlayStation 4 version here.

What was it that caused this reaction in me? Where previous Grand Theft Auto titles had been either top-down or played from a third-person perspective, GTA V allows you to enter first-person mode – a series’ first. With this point of view, suddenly everything feels that much more personal and realistic; and for the first time in your life you’re questioning yourself. At once everything that you’ve had taken for granted from the series – stealing cars, robbing banks, shooting people, beating up prostitutes – come into stark light that sharply penetrate your senses. In the previous games, players could divest responsibility by pitting the blame on their on-screen avatar; here in GTA V the line between character and player is severely blurred. I was only glad of the ever-present option to change the perspective at any given point, because I would’ve hated to have felt guilty and ashamed at every passing minute.

Not to imply that I enjoy exercising my dark, maniacal desires in GTA, of course – just not on a regular basis. The freedom to do virtually anything is something the series has always thrived on, and GTA V is no exception. On the surface, it may seem like a typical GTA experience with even more beautiful graphics and detailed environments… but peek a little closer and this game takes all the major strengths of its predecessors (namely the smart A.I. from GTA IV), spits and polishes them and converts it all into, in what can be described as for the first time, something as tangible, convincing and believable as the street you live in. From the dustbins sitting on the sidewalk to the occasional flickering of a street light to the witnessing of a dog or cat sitting on a high ledge; everything seems to have purpose, and some sort of a story behind it. The astute realism of the people and animals and their authentic mannerisms only further elevate this feeling. 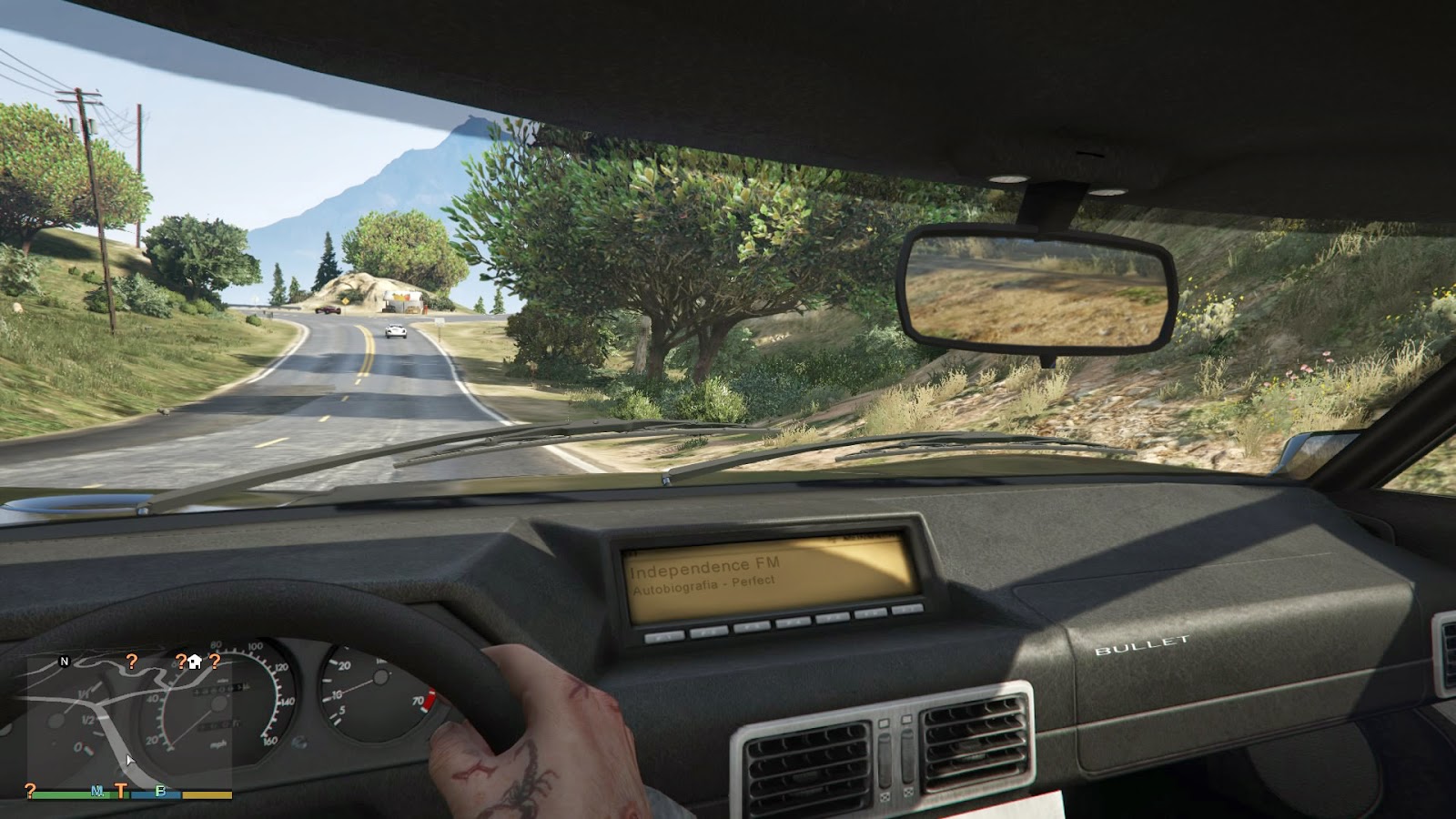 Los Santos is without doubt the finest world so far created for a GTA title, and may very well be Rockstar’s overall best. We were wowed with the moody Liberty City; donned our detective hats as we traversed through the full-of-secrets San Andreas; took a step down nostalgic lane to the 80’s with the colourful, neon-filled Vice City; and came closer to reality when a revamped version of Liberty City came with GTA IV. Los Santos, ostensibly based on Los Angeles, is basically real world translated as is in video game form. There’s really no other way to put it, the impossible level of fine detail and stunning realistic production that has gone behind it. Los Santos is functional, authentic and top of all, believable – which makes it a far cry from the previous settings used prior instalments where the aesthetics, atmosphere and denizens existed either primarily to further the plot or accentuate the theme each game was following. In this regard, for the first time in a GTA title, Los Santos comes across as a place which you end up caring about. You learn of its narrow alleys and expansive highways as if thinking of moving there… and after a good couple of hours, you might just want to.

The gameplay is divided into three protagonists, each having their distinct storyline and characteristics. Michael De Santo, a retired gangster, is a doggie-bag of traits borrowed from well-known gangster characters and personalities. His smart and professional looking demeanor easily matches that of Ray Liotta and Michael Madsen (with whom he shares more than just facial likeness), and his confused relationship with his dysfunctional family mirrors that of Tony Soprano’s from the TV series, The Sopranos. I’ve personally had the most fun playing as him, because of his extremely well-written dialogue, durability of his missions, witty humour and the way he interacts with the other two protagonists.

Meanwhile, Franklin Clinton, the only black guy of the three, will be perhaps the most relatable to many players. His slightly puppy-dog looks, complicated friendship with his best friend Lamarr (with whom the dialogues that he shares are among the game’s best), and the fact that he’s basically a deja vu of Carl “CJ” Johnson from San Andreas, Franklin will be an easy choice for players to identify with. Rounding off the trifecta is Trevor Philips: the groundbreaking star of GTA V and arguably the most iconic from the long-running franchise. A mentally unstable psychopath, Trevor starts off typically cliche, and you may roll your eyes at him. It is only when his character undergoes a beautifully complex and unnaturally deep makeover, however, that will have you wishing you had payed more attention to his earlier moments. Though he routinely betrays expectations and divides the reception from the player sharply into two, Trevor is a gift of a character equalled by many, bettered by none. I personally had a hard time seeing through the eyes of Trevor, but there were moments where this sadistic redneck seemed the most flesh and blood out of the trio. Even the NPCs are worthy of adulation, and this is testament to Rockstar’s solid writing and strong directing. It also showcases brilliantly the development team’s usual knack for creating intriguing characters (or in the very least, pitting them in at-least one memorable sequence). 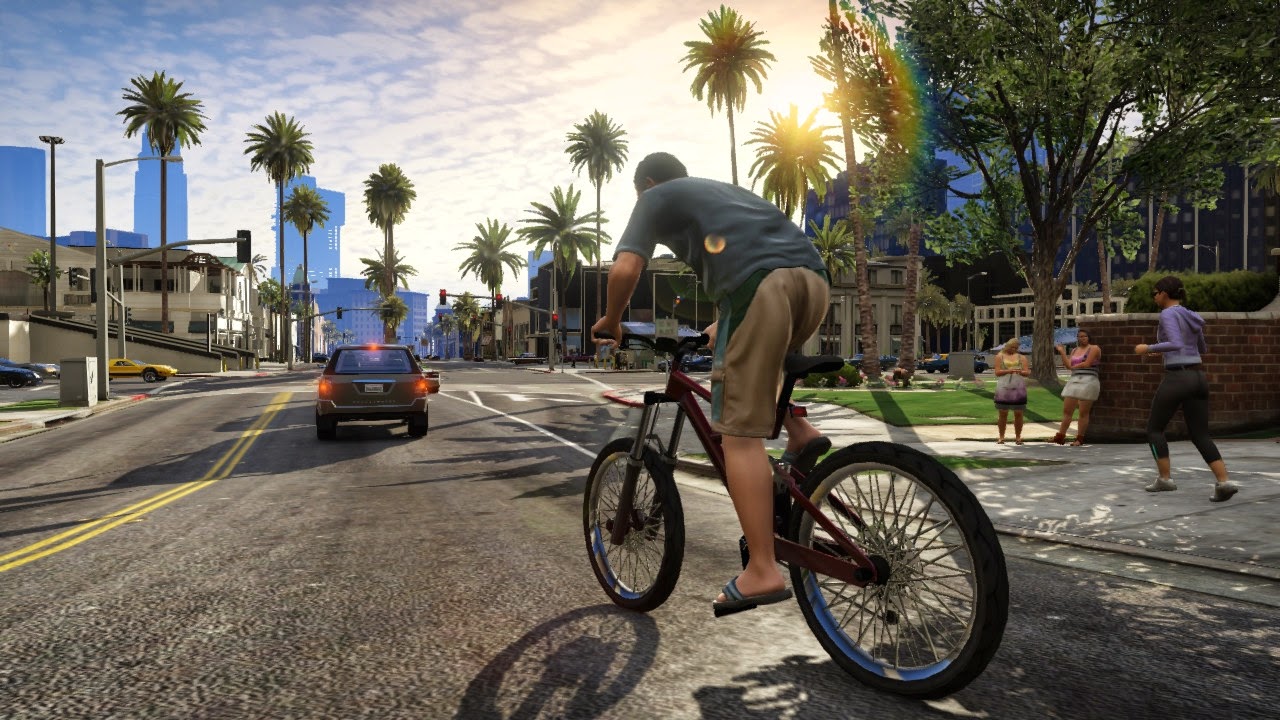 Speaking of which, the best from the bunch appear in Strangers and Freaks – one of the many, varied optional missions that you can do in the game. I believe that this little oddity is perhaps the breakout feature from GTA V. Don’t get me wrong: I thoroughly enjoyed the main story-line, but I, like any other player, needed to stray from the main path once in a while… and Strangers and Freaks is where I always went to unwound myself. It is what it says it is, you meet crazy strangers and eccentric freaks and engage in all sorts of bizarre, surreal and wild side missions. In principle, Strangers and Freaks behaves similarly to the Rampages mini-missions from Vice City, but feature more interactions with NPCs (especially with the stranger or freak in question). Don’t be surprised if you find yourself going back to a certain mission; their addictive quality and fun factor that goes all the way to 11 speak true of the fact of Rockstar’s penchant for creating memorable situations from little, seemingly nondescript things. My personal two favorites are Barry and Mary-Ann. The former gives you some marijuana, and under the influence you must fend off aliens and killer clowns. The latter challenges you to a foot race, shouting passive-aggressive remarks (which are bound to make GLaDOS from Portal blush) along the way. Make sure to take shortcuts – Mary-Ann’s comments at the end of the race will have you in a fit.

Mastering the first-person view in GTA V takes time. Whether you’re a life-long first-person shooter fan and/or have been playing GTA since its inception, the first-person mode implemented in this game is a different beast entirely. For a series that has made us comfortable with the third-person view for a little more than a decade, this perspective shift feels exciting at first, but all too quickly becomes irksome and apparent that most of the game and its missions just simply cannot be done with this mode switched on. I mean, for many of you the first instinct to tackling a mission would be in the familiar way that has been your approach since your last GTA outing, right? Switching to first-person view subtly changes the rules that you have come to take for granted, and a fleeting hesitation on your part can make all the difference between success and failure. Driving with this mode is another issue. I’m a passionate racing game fan and often play them with the so-called “bumper camera” view; but for the life of me I cannot understand what the hell happens to my vehicle when I switch to first-person view in this game. I mean, suddenly the robust controls are replaced by something twitchy like you would see in a 90’s racing game. Impressive as the interior of the car may seem, I found driving around in first-person view the most annoying and often switched back to third-person view after just mere seconds. The other reason why I enjoy driving in third-person perspective is I like to control the camera with my mouse; something that cannot be done in first-person mode.

The voice-acting, as usual from the GTA games, is terrific. Ned Luke (who voices Michael De Santa) is the greatest actor from the game. Luke brings so much personality to his character that Michael at once feels familiar and recognizable, as if you knew him from another game. Luke hits all the right vocal tones – anger is where anger is due, and regret and confusion is felt where actually needed – and rises Michael from his initial stereotypical personality to someone understandable and believable. Shawn Fonteno and Steven Ogg too were excellent in their roles as Franklin and Trevor, respectively. Each managed to inject superb level of personality and depth into their characters. I haven’t heard this great level of voice-acting from the major and minor characters since Grand Theft Auto IV: The Ballad of Gay Tony (where everyone was a winner). 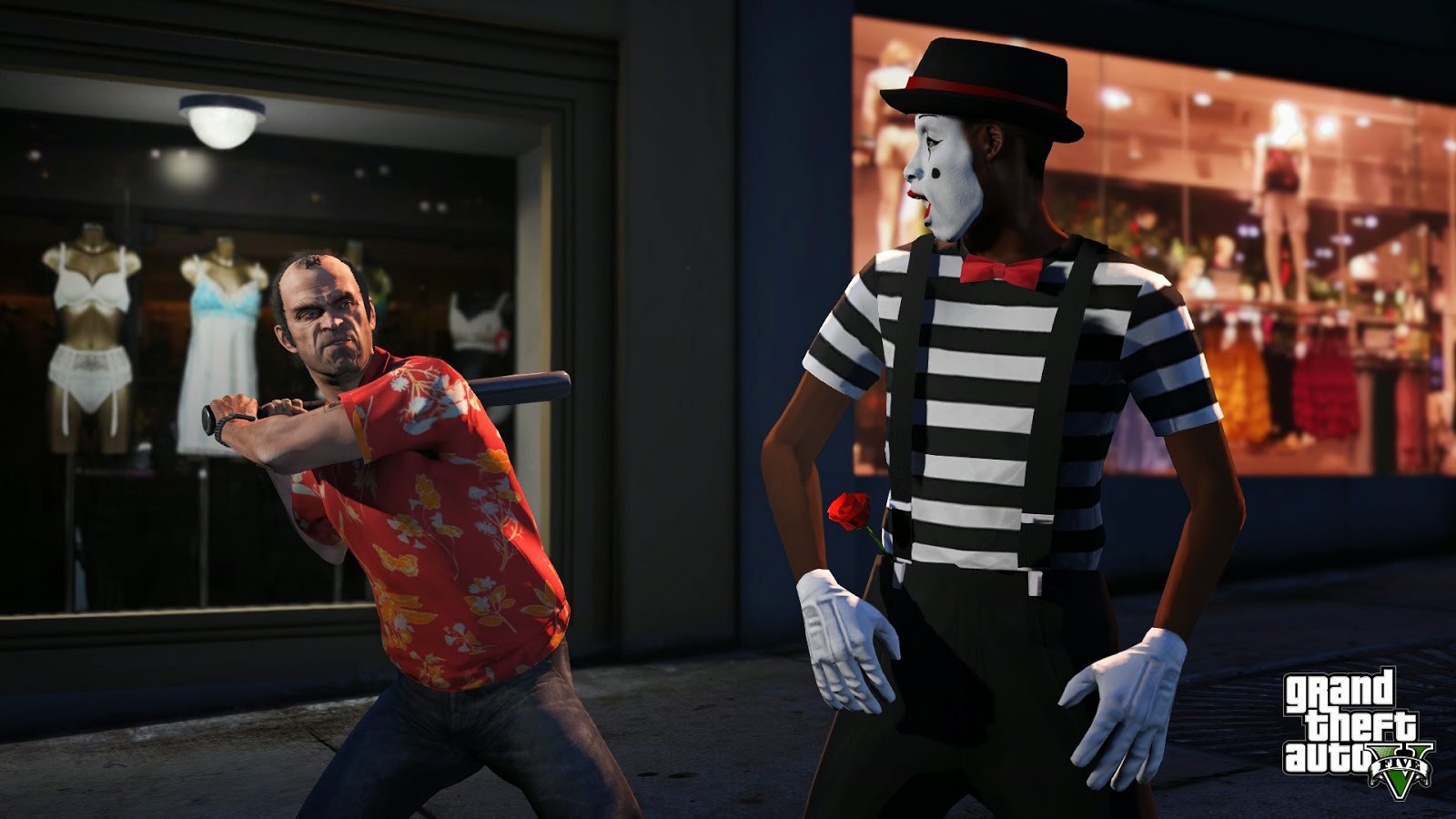 Given Rockstar’s reputation for creating controversial content with satirical tones and sharp social commentary, it should come as no surprise that GTA V carries all the classic hallmarks of this developer, and does it times better than before. Its graphic content might turn you away, but if you take the time to dig in a little deeper, you will find that GTA V is a worthy descendant of the previous games as it carries all the classic hallmarks – it is sharp, witty, intelligent, and just the right shade of nasty -, and is a true inspiration for future open-world action adventure games.

A look at the latest two Zen Pinball tables