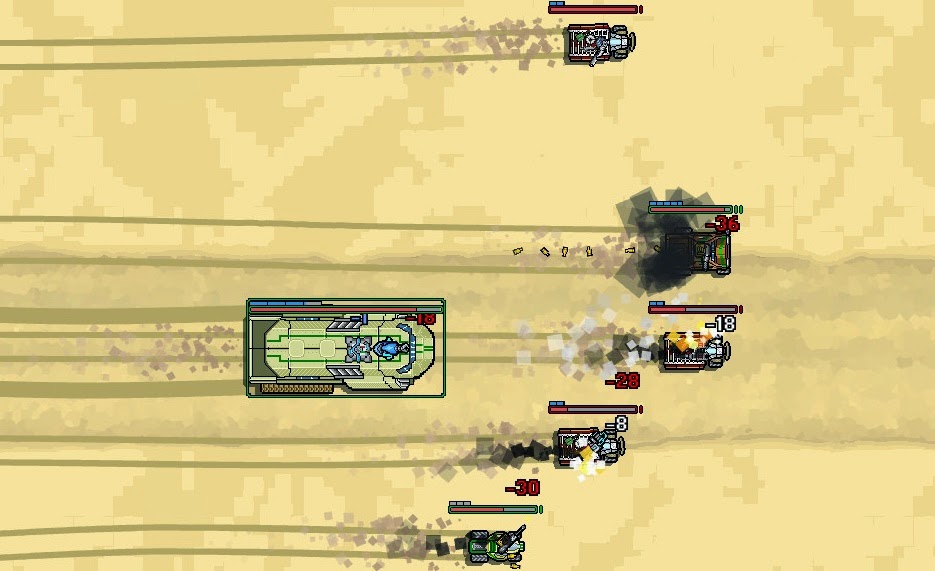 Convoy is one of those games that’s not entirely unique – it’s been defined as a mix between Mad Max and FTL: Faster Than Light since its Kickstarter inception – and on the surface level it could easily be passed off as another ‘clone’; yet, in doing so, you would miss out one of the freshest titles to hit the indie scene this year.

Convoy drops players into action quickly, setting the stage with a quick narrative that finds a traveling spaceship falling from the depths of space from engine malfunctions to an alien arid desert where three separate factions are in a constant state of conflict. In minimalistic style that’s very much in the same vein as FTL, players are tasked with scouring the desert and standing against independent raider groups and the warring factions in the hopes of collecting the necessary parts to repair the space vessel and resume deep space travel.

Embarking upon the first outing away from the downed spacecraft and into the desert wilds, things go wrong and fast. It’s only a matter of seconds upon scouting the map before your convoy unit will be attacked. These events can be triggered at random or found while traversing the main world’s top-down map, which navigating is simplified to point and clicks. When things go awry the meaty part of the gameplay is unveiled. At heart, Convoy is a vehicular combat real-time strategy game consisting of a Main Convoy Vehicle (MCV) and two smaller escort vehicles that can be directed to move around the scrolling playfield at will, and which must defend the MCV at all cost. It’s easier said than done, seeing how the MCV cannot be directly controlled and as the screen constantly scrolls, finding off screen obstacles (i.e. rocks, mines, bridges, etc.) coming into the playfield. These obstacles can obliterate your escort vehicles instantly when contacted. If you survive the first couple of skirmishes, gaining additional bolts (the game’s currency) and extra fuel for your convoy – maybe lucking up and snagging a weapon drop in the process – it’s time to start upgrading vehicles and preparing for the worst. 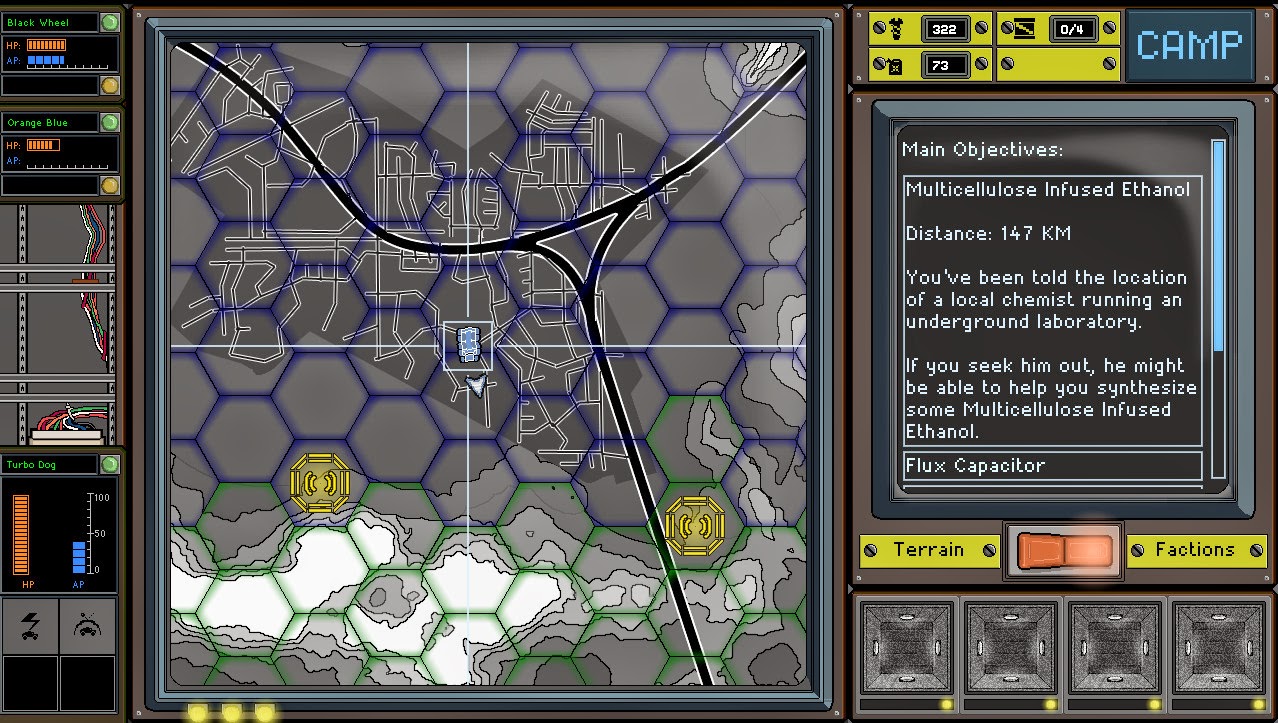 Convoy can be brutally difficult. But before you go running off to the score at the bottom of the review, know that these aspects are intentionally integrated into the game and its environment in such a way that actually breathes life into the game itself; and let’s face it, any game that even attempts to associate itself with the world of Mad Max best bring the pain or suffer the consequences of failing to play as the theme demands. For one who is always up to a stiff challenge and enjoys games with permadeath, Convoy delivers. By procedurally generating the world and its narratives with each new playthrough, players never know what to expect with each new game started. Triggered events set off text-based scenarios that can be downright gritty to the core. With odds that are always stacked against you, navigating these crazed scenarios consistently creates a nerve racking situation for the player. A dialogue situation for a main quest event might be easily acquired through the dialogue scenario on one playthrough, yet the very next game might find you in a fight that utterly decimates the convoy you spent an extra hour scavenging the wilds to beef up a notch. While the main objectives remains the same with each play, the narrative shifts are an excellent gimmick that will keep player’s coming back for more over and again.

It’s the game’s continual unpredictability that utterly hooked me up and reeled me in though. For instance, one of my later runs for this review found my two escort vehicles instantly annihilated by environmental structures in a tough early fight and I thought it to be game over. Yet, the MCV spawned with a powerful weapon that got me out of the fight by the skin of my teeth. While I headed back to a camp to refuel and repair I came across a handful of random events that netted easy income without the need for an actual fight. Upon arriving at camp, there were a handful of MCV upgrades that found me absolutely decimating most anything that came into sight. That is, until a random event’s dialogue baited me into a trap in which my MCV was left extensively damaged and ultimately found me falling to the cards that are continually stacked against me here. Looking back, what seemed to be one of my shortest runs with the game, in fact, turned into one of my closest chances to acquire all of the parts to repair my spacecraft… and that’s without escort vehicles!

If I could stamp a quote on this game’s cover it would read, “Nice guys finish last.” This quote fits no game better than Convoy in my opinion. Want to be a nice guy here, then prepare to run out of fuel, not have enough resources to upgrade or afford additional escort vehicles, and to be utterly destroyed by the most random of encounters. In these arid parts of the universe, choosing to help out a stranded convoy can reap some rewards, or it can deplete resources rapidly or find you having to convert your own units – or even crew members! – to biofuel. It’s morally challenging, tough as nails and addictive to the core. 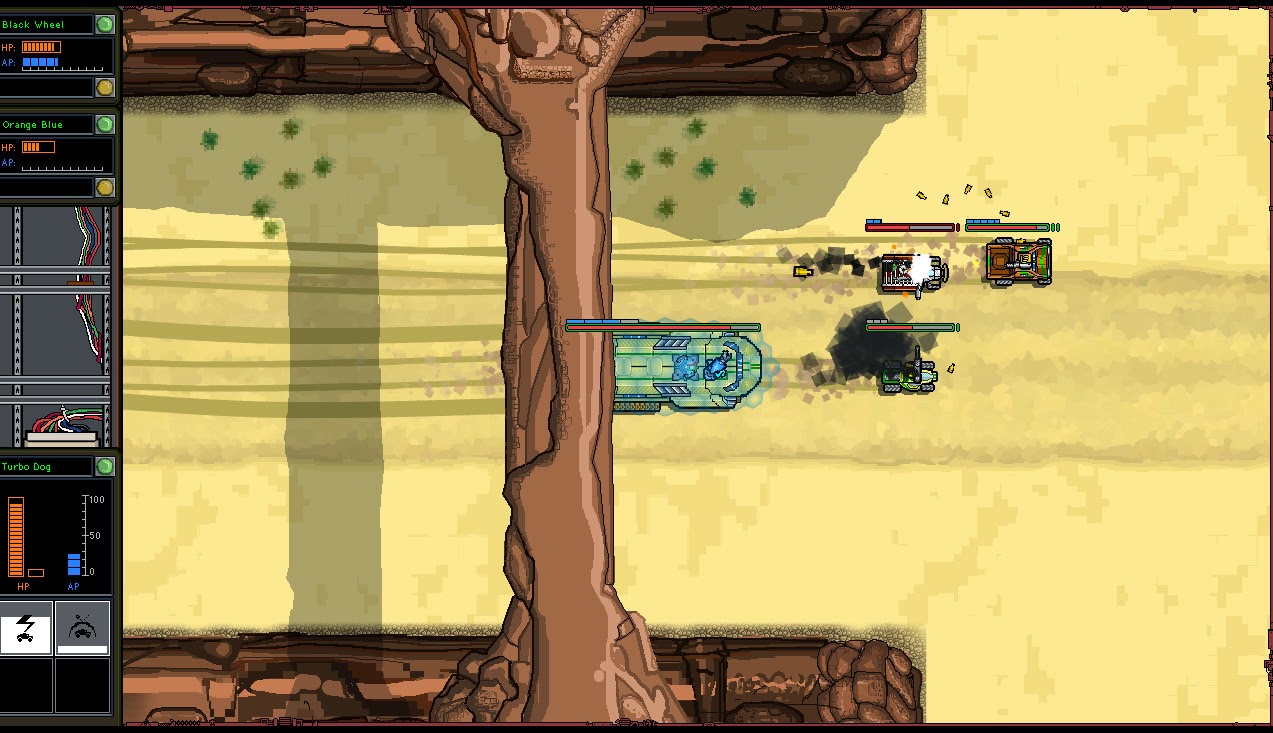 Related reading: Game theory; what the roguelike tells us about humanity.

Retro minimalistic titles with great soundtracks and gameplay gimmicks were a fresh breath of air just two years ago, but since then the mobile and download markets have been weighted down with them. While Convoy could easily and mistakenly be wrote off as another ‘clone’, one of the most challenging and grittiest indie titles of the year would be missed out on. If Mad Max: Fury Road turns out to be half this good, I’ll be set for life.

Review: War for the Overworld (PC)