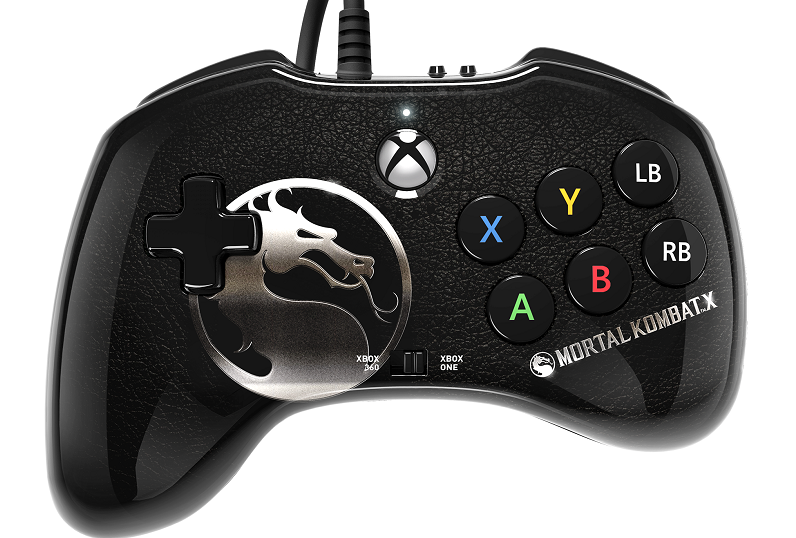 The first thing that came to when I picked up the Mortal Kombat X Fight Pad by PDP was this: “Well this sure feels different.”

I mean that in a good way, however. Certainly everyone has their favourite controllers for different reasons, but I think most fight fans can agree that the Xbox 360 controller was something of a bust for fighting games due to the lacklustre directional pad it used. For this reason many people picked up their fighting games on the PlayStation 3 instead.

Enter the Mortal Kombat X Fight Pad. The first thing that stood out to me was its asymmetrical design. The left side of the controller is longer, allowing you to really grip it and get better leverage when using your thumb to manipulate the direction pad. On the right side of the controller, the grip is shorter with the idea that your thumb has easier access to all of the face buttons. It makes sense in theory and works well, though I did not personally need this design. I have fairly large hands, and therefore never struggle to reach buttons on the face of a controller, but my son has smaller hands and this pad grew on him quickly. The back of the controller is contoured to match and is actually very comfortable for longer, intense gaming sessions. If anything struck me as odd about the form factor, it is that the two trigger/shoulder buttons feel a bit uneven as a result of this design.

The directional pad offers very precise movements. Those who have been struggling with Xbox 360 offerings should give this pad serious consideration for this reason alone. One of the best features about this fight pad is that there is a switch near the base that lets you toggle between Xbox 360 and Xbox One usage. Want to use this puppy on Mortal Kombat 9 for Xbox 360? Feel free. While it is in 360 mode, the controller syncs right up with your PC as well if you wanted to use it as a fight pad there. 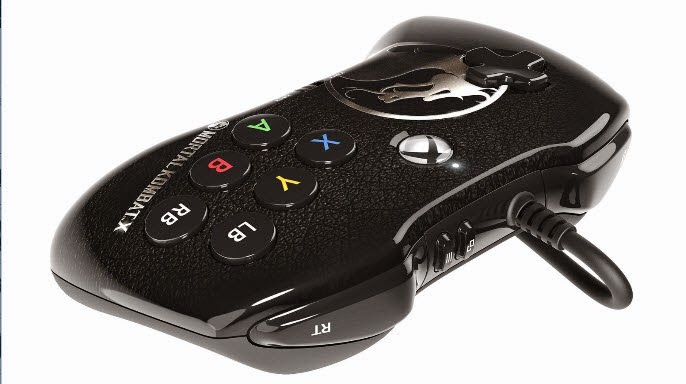 While the directional pad is indeed sharp, it also calls to attention what the controller is missing – analogue sticks. You are not going to use this controller with a first person shooter. In fact, it won’t work for some games that do rely on the directional pad to do one thing and a stick to do another. That covers off almost every game available on the console. This helps to present a clean interface, and complete with a sharp looking Mortal Kombat logo off-centre to the left this is geared towards fighting games first and foremost.

The other notable item about the controller’s design comes from the six face buttons. Here the triggers are left at the top of the controller while the LB and RB buttons have been pulled down to the face of the pad next to A, B, X and Y. This simulates the arcade cabinet layout for games such as Street Fighter that use a light punch, medium punch, heavy punch order across the top row with light kick, medium kick and heavy kick along the bottom. Ironically enough, many modern fighting games have
moved away from these control schemes, mitigating the usefulness of the face button layout.

Two other buttons get a new location. The system buttons are tucked away along the top of the controller, and are nestled into a sloping centre that keeps them from accidentally getting hit. It is nice to keep them out of the way, though it does take a little bit of getting used to when you actually are seeking them out and want to pause the action. One last notable design choice is that this is a wired controller. I appreciate the ten feet of cord length, but generally prefer wireless if it is an option. I think many others will agree, now that television screens have gotten so big and people tend to sit further away from the screen.

There are a couple of oversights that could have made the Mortal Kombat X Fight Pad even better. For one, I do wish the buttons and directional pad were raised up from the face of the surface a little higher. That’s probably a personal issue more than anything. However, one oversight that is not is the lack of a communication port for the headset. With the Kinect, you may very well already have a microphone in your room with no need for a headset jack. However, if you really want to chat with your friends while playing and prefer headsets, you will need to hook the headset up to a second controller placed on or near your lap while you play with this one. It’s hardly a deal killer, and I do not play online nearly as much as my son, but he grumbled about it a few times before settling on the two controller compromise. 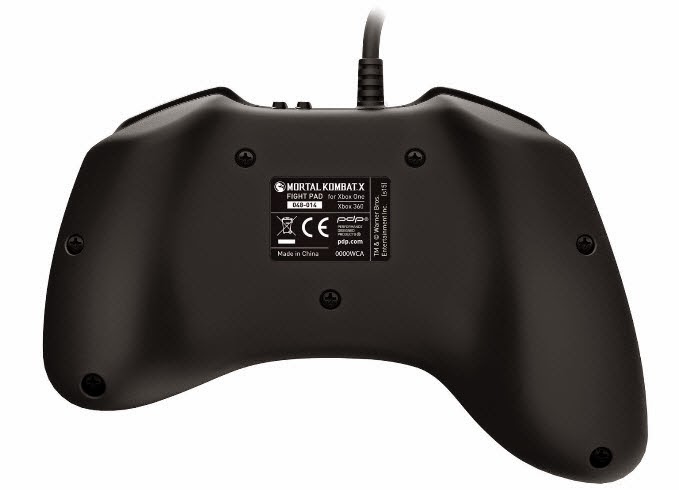 Related reading: PlayStation owners might want to pick themselves a Venom Arcade Stick for their fighting games.

Considering Street Fighter V’s exclusivity on the Sony PlayStation 4, Mortal Kombat X might be the best reason for a vendor to develop a fighting stick or pad for the Xbox One. It is nice to see what PDP did with its, opting for crisp buttons, a dedicated directional pad and a comfortable design. The quality is excellent, holding up to marathon sessions where buttons were being pressed quite vigorously, but the Mortal Kombat X Fight Pad never became uncomfortable in my hands. A couple of curious design choices hold this controller back from perfection, but it is still a strong contender.

Review: Stealth Inc 2: A Game of Clones (Microsoft Xbox One)