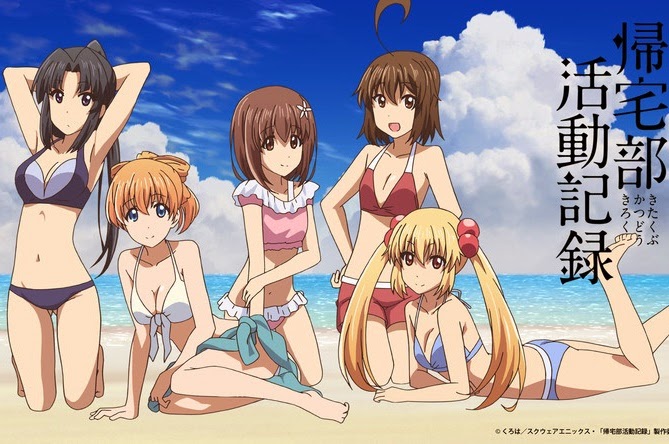 If any label could encapsulate the sheer zaniness of Chronicles of the Going Home Club, it’s “pure comedy”. Tempting as it is to lump it in under the ever-broadening umbrella of “school comedy” for the sake of categorisation, doing so does a disservice to both the show and its potential viewers. It defies the formulas of industry contemporaries by pouring every drop of its passion into an endless stream of gags to such an overwhelming extent that everything else is an afterthought. Philosophical discourse this is not, but I dug just about every second of it.
The series begins under a suitably frivolous pretence. High school student Andou Natsuki makes a playful remark about joining the “going home club” when asked which extracurricular group tickles her fancy, only to discover that the Going Home Club is all too real and she’s now become a member. After introducing a handful of the quirkier archetypes school comedies have to offer– the rich girl, the innocent cutie, the martial artist – the show lets loose.
There’s nary a developed character in this orchard of quirky high schoolers and I’d be hard-pressed to call any of them particularly relatable besides perhaps the straight man. Not a modicum of effort is expended maintaining a continuity or working in a bit of heartfelt back-story for the finale. If the characters want to spend the episode deconstructing the formulas shows use to maintain viewer interest through the first three episodes of a new series during the fourth episode, so be it. 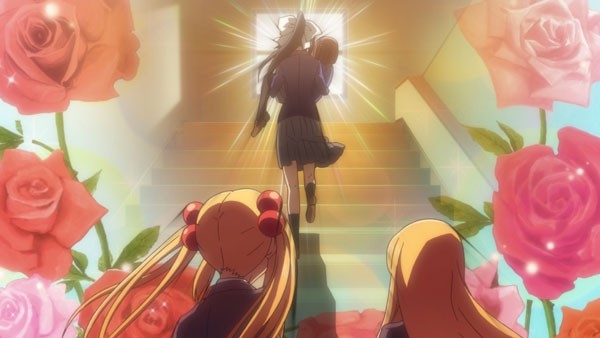 Yet in casting aside all reverence, the show becomes oddly therapeutic. You know you’re going to get 20+ minutes of gals chatting and squabbling inanely in some kind of school setting but that one lynch pin of consistency grants all the possibilities you could ever need. The ceaseless gags carry the entirety of the show on their back and every ounce of this show’s success is a direct result of them. If you do find any characters relatable, it’ll be because they’re a ripe target for a particular brand of humour that tickles your fancy.
This would all be for naught if the show’s humour fell flat, of course, so that Chronicles of the Going Home Club doesn’t rest entirely on the established laurels of gag anime helps spell its success. The writers employ every type of humour in the book from puns to slapstick to shock value rather than rely chiefly on pop culture references like Nyaruko or similar shows do. I recognise just about every comedy ever has a mix of styles, but Chronicles’ boasts a broad range, generally nails the ratio to keep things interesting, and backs it all up with excellent comedic timing too. Risqué punch lines weave in from left field and belie the generally innocent nature of the show, which makes them pop and all the more shocking due to their scarcity.
Well, perhaps presenting the show is a cavalcade of comedy is slightly misleading because it implies the lack of a trademark. This show does hold one particular tendency firmly against its proverbial chest and that’s breaking the fourth wall. Then again, to say Chronicles of the Going Home Club breaks the fourth wall is akin to pointing out that Gundam features giant mechas or Yu-Gi-Oh! has card games. Watch for more than five minutes and see how it vaporises that proverbial “wall” with force so unruly it becomes one the show’s fortes and defining aspects. 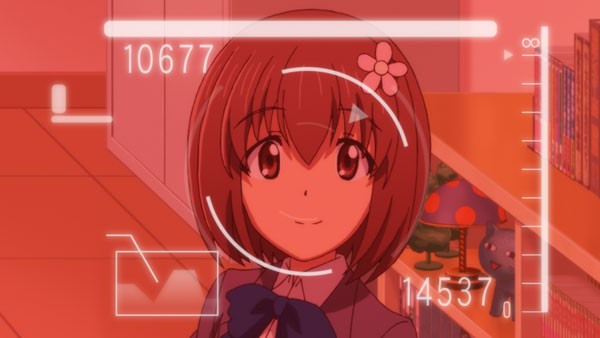 It’s a minor miracle that this show’s fourth-wall obsession remains amusing for the bulk of the series’ twelve episodes. Because it spends so much time poking fun at the industry and itself Chronicles becomes extra potent in tickling the funny bones of more jaded viewers. Entire episodes are dedicated to discussing what the plotline should be as the tropes masquerading as characters poke fun at other tropes masquerading as characters. At times it’s just a little too brain-meltingly meta for its own good. In fact, and I found myself simultaneously pondering my sanity and the functionality of my Blu-Ray player.
Still, overexposed as the self-referential humour and discussions aimed squarely at the audience can become at times, Chronicles of the Going Home Club has a very quaint sincerity associated with it as a result. It knows precisely what its purpose is and never pretends otherwise. As a result, I grew a fondness for locales and characters that, by all means, should been lifeless.
Chronicles of the Going Home Club is a bag of Jelly Bellys crossed with Weird Al’s Greatest Hits. It’s not going offer any one hard-hitting “flavour” (satire in this case), but it’s a sure-fire way to have a good time at the expense of others’ material and it’s hard to stop guzzling down the bite-sized entertainment.
– Clark A.
Anime Editor
Email me at: clarka@digitallydownloaded.net
Share this