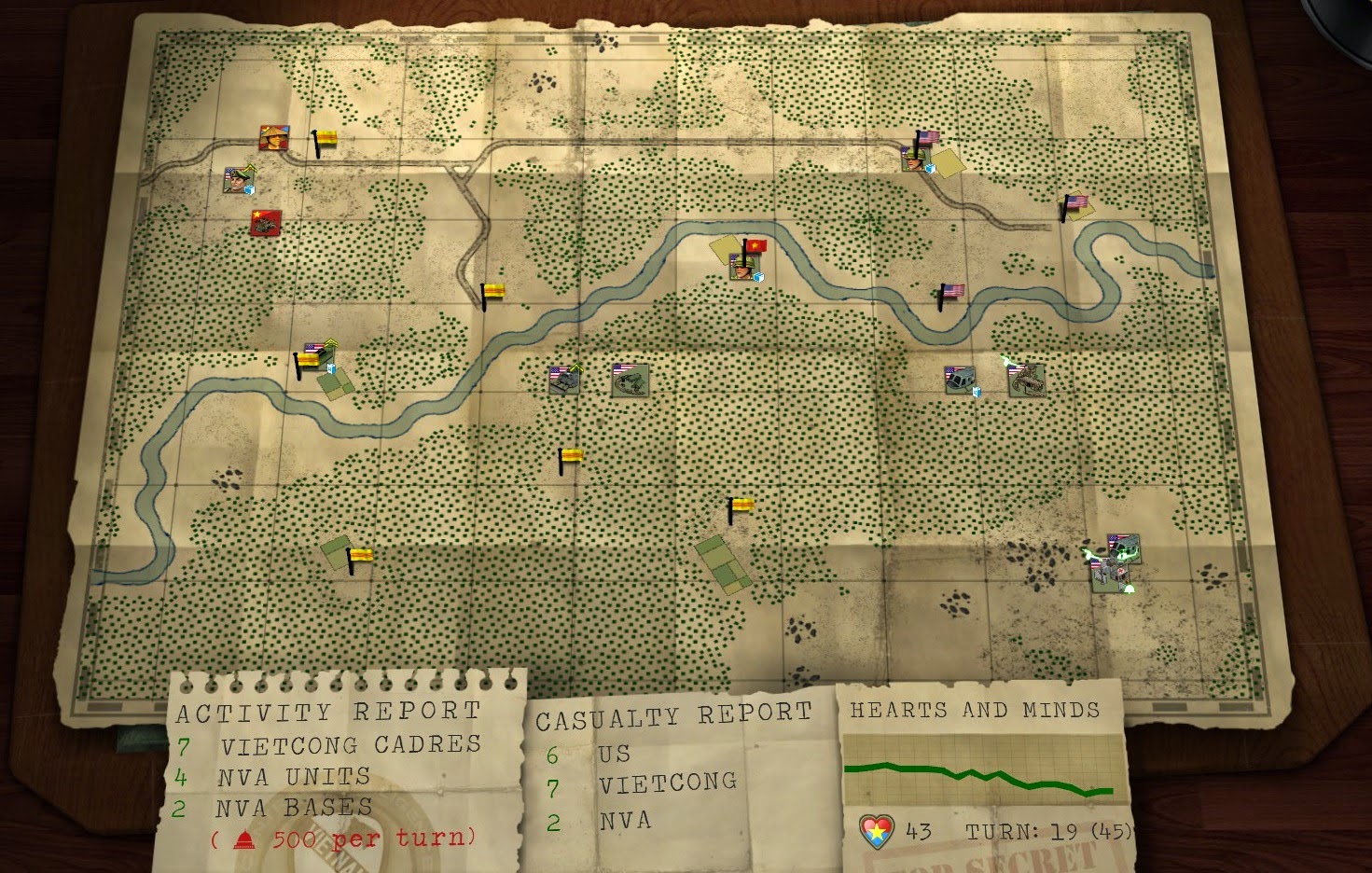 Turn-based wargames. You know how they work, right? Move, fight, move, fight, move. But this one doesn’t stick to the template. And it’s all the better for it.

As anyone who’s seen Apocalypse Now will tell you, Vietnam was an unusual kind of war. As well as the regular troops of the North Vietnamese Army, US forces had to square off against the Viet Cong, whose knowledge of local conditions gave them a ninja-like ability to strike without warning. Then there was the terrain. With dense vegetation, scattered villages and few roads, traditional land-based logistics were impossible, making the iconic Huey helicopter the only way of putting troops where they were needed. Finally, there was shifting political support back home. Taken together, these factors made for an asymmetric and oddly contemporary conflict. Uncle Sam had better equipment, training and logistics, but the fight was never going to be easy.

Vietnam ’65 takes all of these elements and successfully recreates the feel, if not the historical detail, of US operations in South Vietnam. It’s a fairly light game with an almost negligible learning curve, but it packs a host of interesting tactical decisions into the three or so hours that it takes to complete each map. 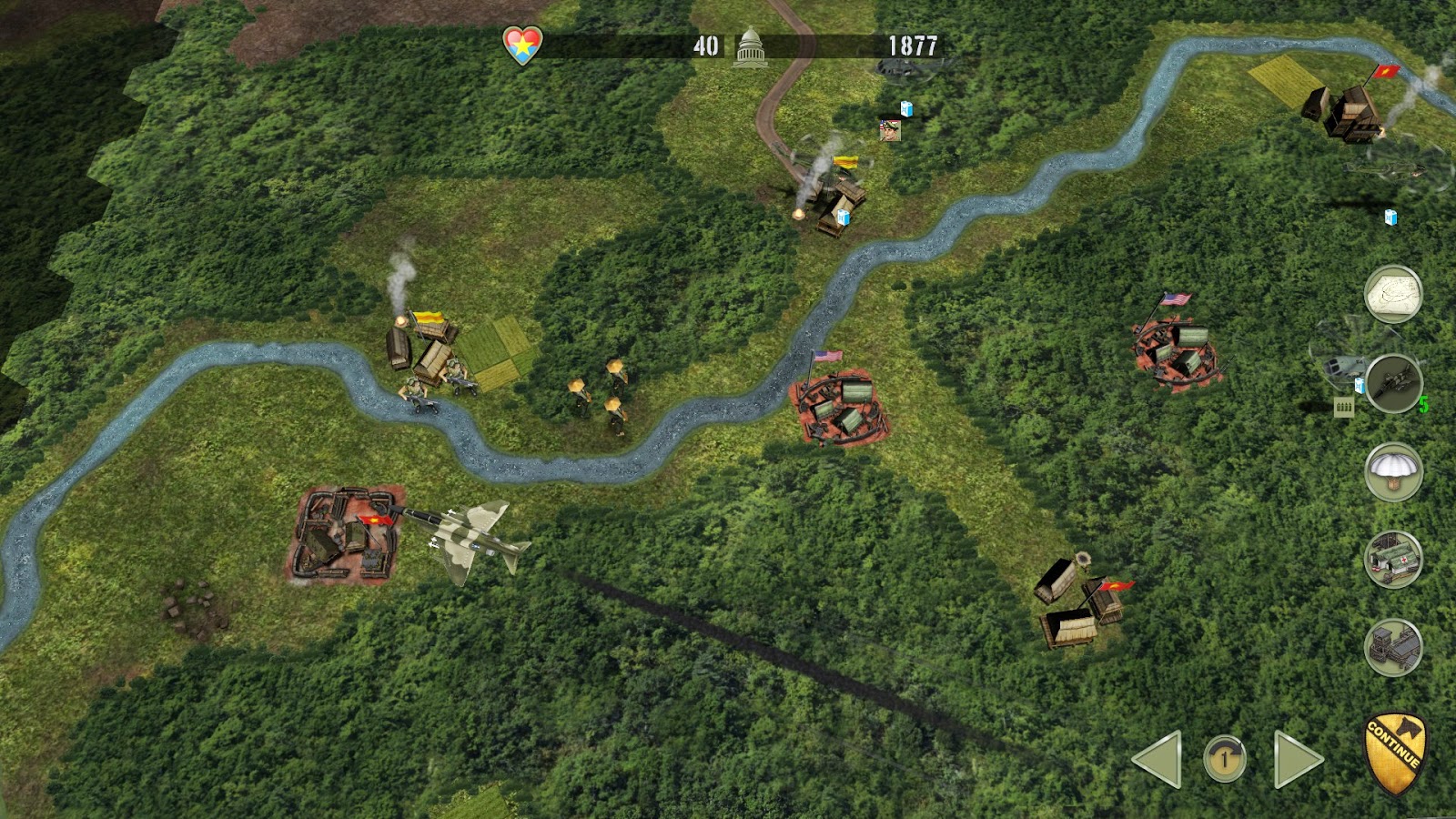 The game puts you in charge of US forces in the thickly-wooded La Drang region and, in a break from conventional wargames, victory is measured by the attitude of the local populace. Each turn, the game creates cadres of AI-controlled Viet Cong guerrillas whose main task is to infiltrate local villages and convert them to the Glorious People’s Way of Thinking. Every VC success raises the chances of the better-armed North Vietnamese Army getting involved, leading to the worrying prospect of military losses and weakened political support back home. However, if the locals are still friendly after 45 turns, your hearts & minds campaign has been successful, and you win.

Each game follows roughly the same pattern. You start with headquarters at the eastern edge of the map and a stock of political points to buy new units. Unfortunately, your operating range is limited by the fuel tanks of your whirlybirds, so it’s vital to establish additional supply bases early on. After that, it’s a matter of working out where the insurgents are most active and trying to disrupt their operations. Due to the difficult terrain, rebels can be incredibly hard to spot, so often your first inkling of their presence is when they appear and take a pot-shot at your units. It’s vital to gather intel by sending troops into local villages, or by using the superior scouting abilities of the Green Berets. If all goes well, you’ll get additional political points and the locals will like you more. Get it wrong and the NVA will establish bases and launch direct assaults on your positions.

It’s a formula that feels fresh and innovative, and it’s backed up with a roster of units that all have a role to play. Infantry is crucial for gathering intelligence, but they’re poor at spotting and need constant resupply. Cobra helicopters are devastating, but they can only respond to confirmed enemy sightings. Artillery and airstrikes can turn the tide of battle, but they too come with drawbacks. And behind everything, there’s the constant buzz of Hueys as they refuel, resupply and transport. Vietnam ’65 is as much a logistics simulator as it is a wargame. 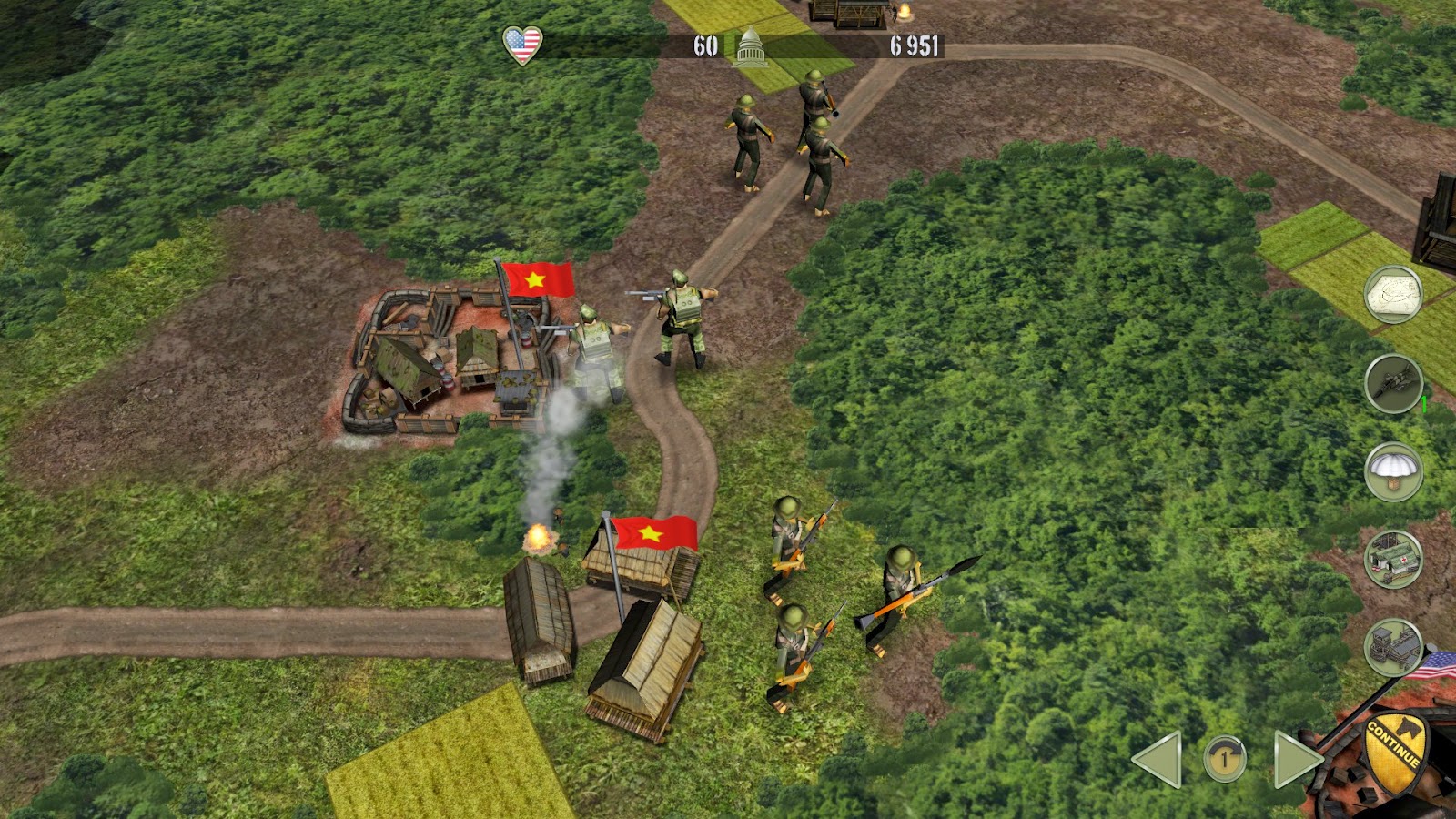 All of this adds up to a game that’s heaps of fun. The Veteran setting provides a nicely balanced challenge, and it’s so enjoyable that I ended up playing for far longer that I intended to. Nevertherless, there are still a couple of problems. The interface could use some tweaking – it’s far too easy to mistakenly issue a command instead of a move order, for example – but the biggest concern is a lack of variety. There’s just one game mode and, while the randomly-generated map mixes things up a little, your underlying strategies will always be the same. In this sense, Vietnam ’65 is a bit like a favourite boardgame – brilliant while you’re playing it, but you’ll be craving an expansion before too long.

However, Slitherine counter this with one final feature – the price. I could moan about the lack of multiplayer, or the fact that I’d like to play as the NVA for once, but that would just be ungrateful. For the quality on offer, this title is ridiculously cheap. And, if any DLC is eventually published, I’m definitely going to be buying it.

Related reading: Slitherine is a prolific publisher, and you can check out some of our reviews of its (many) other games here).

So, while it’s a slightly limited experience, Vietnam ’65 impresses with its novel mechanics, interesting setting and entertaining gameplay. True innovation is rare in the wargaming world, but this title has it by the Huey-load. And, with its super-budget price, this is one game that all strategy fans can afford to try.