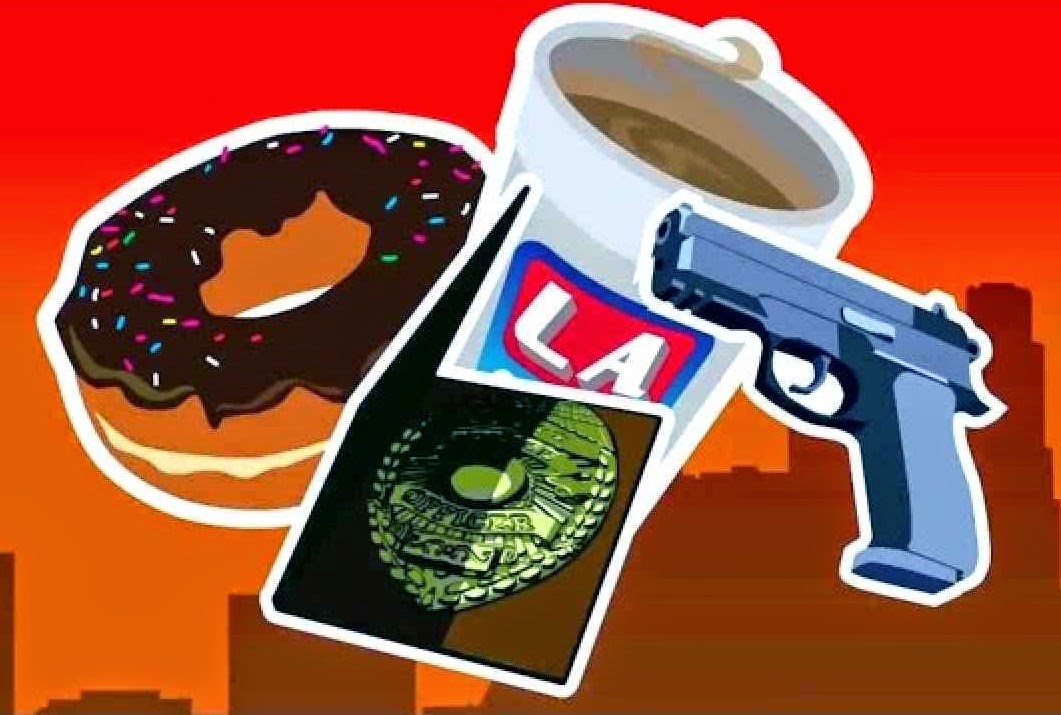 After seeing some trailers and previews for LA Cops I thought it could be something really exciting… sadly it turned out to be more frustrating than fun.

LA Cops is a top down shooter that takes place in the 1970’s. It begins with the player picking two cops from a roster of six, and after that selection there’s a short cut scene where a cop finds a note and a wedding ring… it seems his wife wants a divorce. Sadly this doesn’t exactly present itself in a way that you’ll be able to care about what should be a pretty sad moment. In fact, the narrative is such that while the cops all have names, they were all such forgettable characters that I can’t remember any of them.

There’s plenty of cliche in the narrative design. The first level is a doughnut shop and everyone knows to never mess with an officer’s doughnut and coffee. The goal of each level is simple – kill the bad guys in the shop. I went into the shop and opened a door hitting the bad guy which knocked him over. Then I followed up with a melee attack, enabling me to arrest him. Moving on, there was another goon just ahead so I sneaked up behind him to perform another melee attack, but through some sorcery that attack went right through him without doing any damage. So I try again and again with the same result and he turns around killing me in one shot. To put it bluntly it didn’t take me long to realise this game has terrible hit detection. 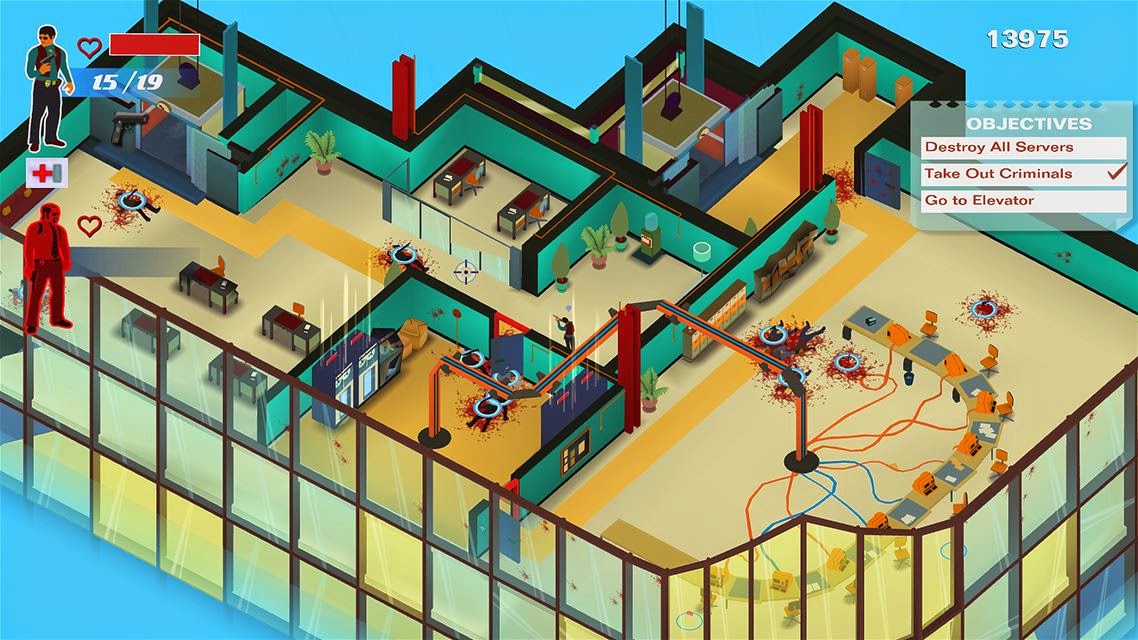 Because it’s frustrating to try and do things the moral way, you’ll get more points for arresting bad guys, but killing is far easier. This is especially true in later levels, where there can be a lot of land to cover and it’s simply not worth risking character death from the dodgy engine. There were other issues too. For example at times I ran into situations like enemies would kill my cops from strange angles where I couldn’t fire back – I guess they must have special wall-penetrating guns.

After beating a level the game awards XP based on how well you did. That XP can then be used to improve the cops health, speed, damage and clip size. You can also spend XP on new weapons, but there are only a few to pick from. As I got further into the game I started to notice that no matter how much I upgraded the cop’s health and damage, they would still die with one to three shots and the goons took the same firepower to take down. Some might call that scaling difficulty, but it simply left me wondering if upgrading skills did anything at all.

The AI is terrible. You can order the cop that you are not controlling around, but most of the time if they come in contact with a goon, instead of engaging them, they will just stand there and get killed. This is a pity because if this AI worked better having the two police work together would have added a level of strategy to the mix, but as it is, it’s a broken feature and not many players will find it agreeable or useful. The enemy AI is a tad better than your cop buddy… but it’s still bad. Sometimes they seem to have super-human sight and hearing. When you try to sneak up behind one they somehow spot you, regardless of how careful you are. Another point of inconsistency is that sometimes when you shoot enemies from all over the place will come running, but at other times they could been in the room next door and behave like they hadn’t heard anything at all.

All the levels have the same basic objectives; kill all the goons, destroy all the drugs, and repeat. In later levels the game will add hostages who will get in your way. Killing hostages will understandably lower your score, but have very little value to add to the experience beyond that.

Overall L.A Cops is okay, if you don’t go in with high expectations. And there’s potential in the mix for the developers to patch things up and provide more consistent experience. Even with those requisite patches the game will be limited, but then at $15 it’s not asking you to bankrupt yourself to try it out.