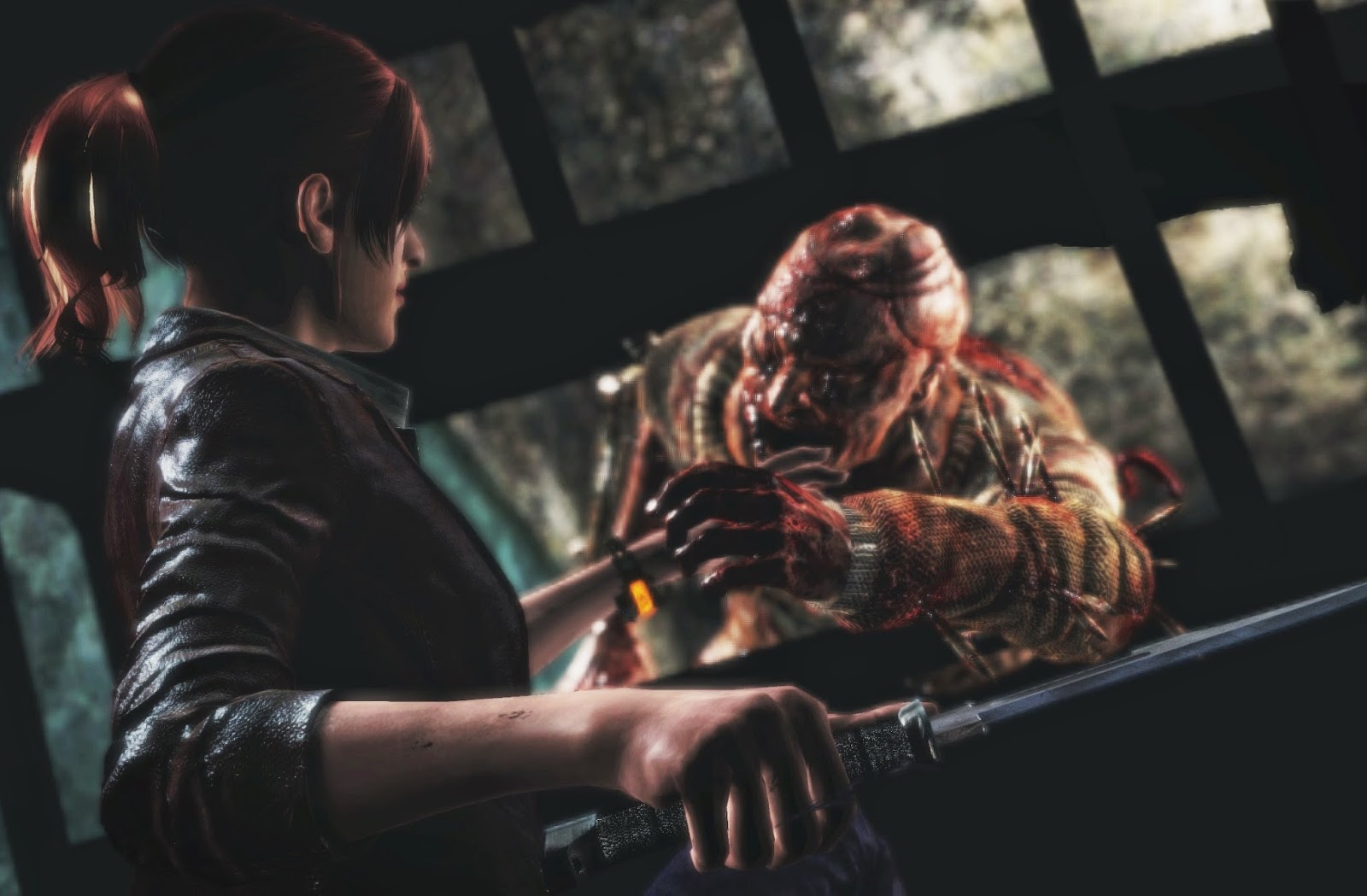 Resident Evil brings an episodic format to the direct sequel of the new Revelations series that it introduced back in 2012. Rather than give players the whole game in one go, Capcom decided to release this one in weekly instalments. It’s a very interesting idea that really supports the already chapter-based format that the first game introduced. Only playing for roughly two hours a week gives the game enough time to flesh out the story and its characters, without getting too repetitive, and thus dealing with something that the overall Resident Evil series has been struggling with recently.

Revelations 2 placed you in the boots of two zombie-slaying veterans, Claire Redfield and Barry Burton. But they’re not alone this time. Claire is joined by Barry’s daughter Moira, where Barry is accompanied by a strange little girl called Natalia. At a event for TerraSave, a company that aims to prevent bioterrorism, Claire and Moira are abducted and knocked out, before being taken to a rotting prison facility and left there to… rot. Yes, it’s that generic. But Barry and Natalia have a much more interesting story to follow, where Barry is looking for his aforementioned kidnapped daughter, and just so happens to come across the same island that the ladies are imprisoned on.

Revelations 2 brings on a co-op gameplay, that is similar to that which was controversial in Resident Evil 5 and 6. The difference here is that now the two players on the team are vastly different in abilities. Claire and Barry are the only two who can fire weapons, because Moira is too afraid to shoot a gun (hey, one sympathises – ed) and Natalia is a child. In the terms of singleplayer, it works pretty well. Moira instead has the ability to use a flashlight, Alan Wake style, and stun the walking dead by shining a bright light in their eyes, where Natalia can see the aura of enemies, which has various gameplay implications. 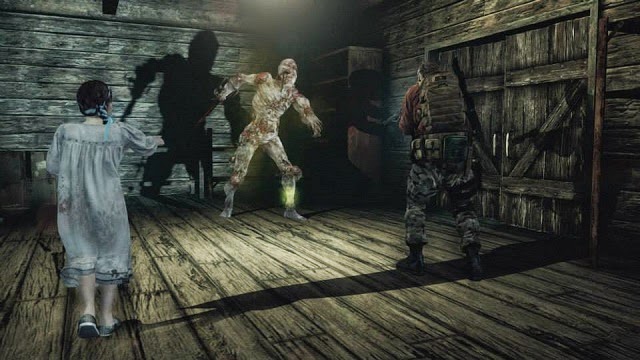 Normally what I found myself doing was playing the game as the secondary character while exploring around, and only switching to Claire or Barry when I had some zombies to kill. This works for single player, but it must be said that in co-op play, one player is given a inferior experience. There’s nothing enjoyable about your sole role in the adventure being to see enemies through walls, or shine a bright light in their eyes. There are moments that work well, such as Natalia being the only one who can see an invisible flying zombie, and having to help Barry shoot it, but those moments are few and far between. I love the co-op system Capcom has developed over the years, and to see it taken giant steps backwards is a shame.

The game itself is split over four chapters, that hold two episodes within, all up having eight episodes, with two bonus episodes for Moira and Natalia. The episodes are fairly formulaic. Start level, find an important object, fight off waves of zombies, rinse and repeat. There are some stunning moments, with the middle two episodes being the strongest of the game, yet the inconsistency is a problem. For example, the last chapter has one episode incredibly short and very well done, where the other episode is almost an hour and a half, and is essentially two relatively dull episodes in one. Pacing is the biggest issue found in Revelations 2. In most cases the early parts of each episode start of fairly slow, only to pick up when every single zombie on the island decides to join together at the same time. There were multiple times that I hit walls of seemingly unfair difficulty spikes, which resulted in moments of repetition and boredom.

By far the strongest and most enjoyable aspects of Revelations 2 is the enemy design. It’s much more diverse from the weird sea slugs we found in Revelations, and that’s mainly because we’ve returned to good old story of re-animated human flesh. Seemingly having run out of letters, the T-Phobos virus, reacts to the body when the host is experiencing fear, and fear creates zombies. It’s a shame that there’s nothing scary about Revelations 2, though that would explain why the four heroes don’t mutate into zombies, I guess. The boss design is brilliant, and aside from the final boss, which simply drags on for far too long, they are all great fights. They’re smart as they effectively utilise the skills of the support character. One fight with Claire and Moira sees you using Moira’s flashlight to burn the skin of the boss, revealing the weak spot for Claire to shoot at. Potentially these fights wouldn’t feel as dragging in co-op as they did in single player, but they’re still enjoyable nonetheless. Plus, and slight spoiler alert here, we get a great rocket launcher ending. 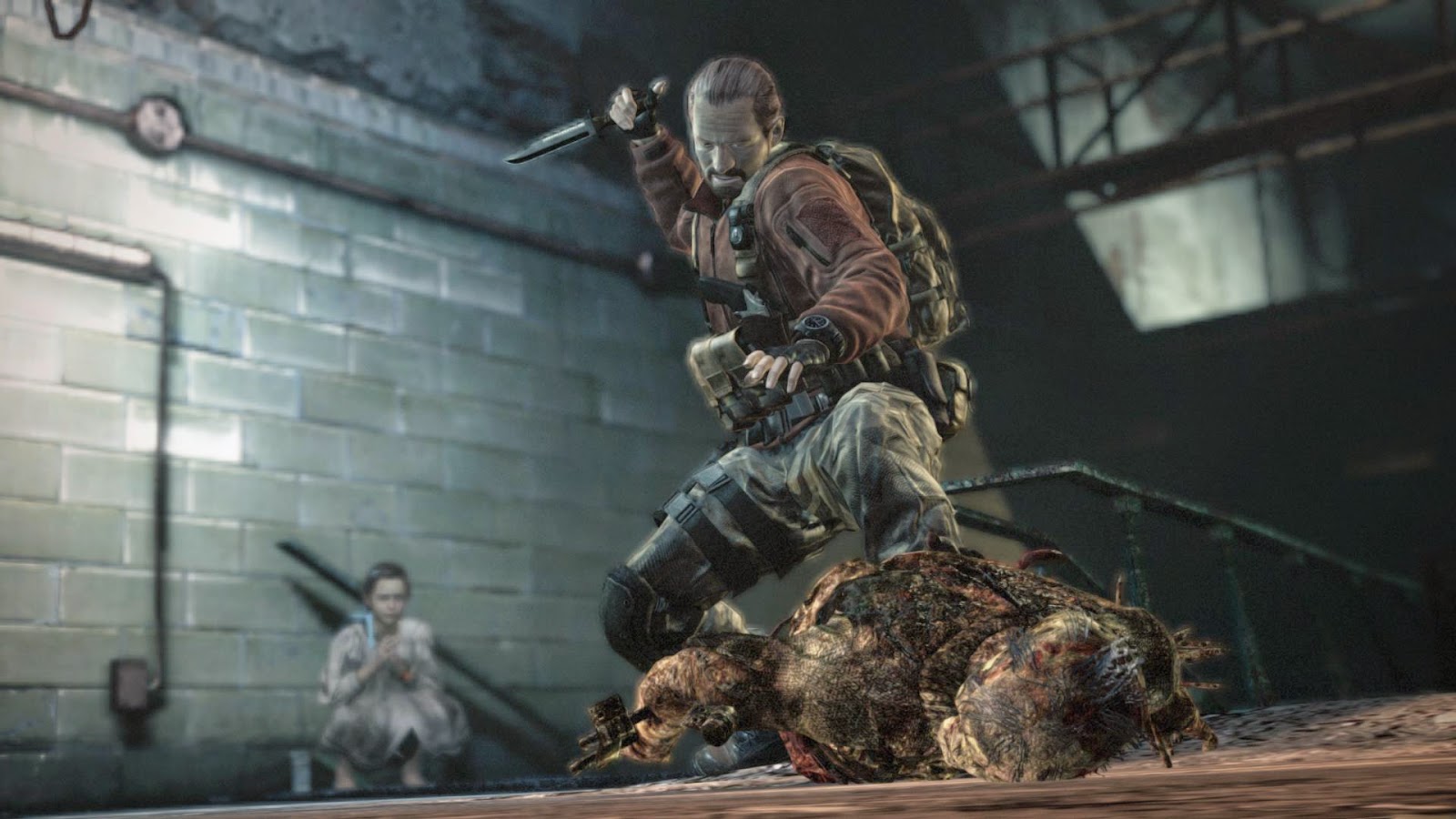 Raid mode returns, and while it’s not as exciting or fast paced as what we saw in previous title’s Mercenaries modes, it adds an incredible amount of longevity to the game. Players run through a gauntlet-like level, playing out in iconic locations found throughout the series. Players are able to scale to increase the difficulty, and one or two levels extra offers a significant amount of challenge. Raid mode is the only mode that has online co-op, but again, it’s fairly forgettable.

Capcom are very lucky. It’s rare to have a formula that works so well. From the episodic formats, (not to mention the brilliantly produced “previously on” and “next time on” segments), to the strong enough gameplay, there’s enough content here for a lot of people to enjoy. I am disappointed about the features that have taken a step back, however if you’re looking for a solid, single player, B-grade horror game, this is where to go.

The games of April; quality over quantity this time around

Interview: EXCLUSIVE! Sequel to Don Bradman Cricket in the works!