What happens if you take an already solid keyboard, make a few improvements to the overall design and add some considerable flash? You wind up with an even better overall package, which is the best way for me to describe the Tesoro Excalibur Spectrum Gaming Keyboard.

Several months ago, I had a chance to test out a brown switch version of the Excalibur brand of gaming keyboards, and now I have had the chance to get my hands on the vendor’s latest offering, the Spectrum. This model was of the blue switch variety, which means it is much louder and more ‘clicky’ than the previous one I tested. Whether that is a sore point or not will depend on the capacity of you and those around you to tolerate clicks. They keys here are light and fast, offering crisp, clean keystrokes consistent with blue switches found on other mechanical keyboards.

Like the keyboard switches themselves, each of the keys has its own individual backlight behind it, offering a ridiculous range of illumination options. That is the primary selling point behind this keyboard, but if you do like your typing machine to be flashy, then I have to tip my hat to what Tesoro has done here.

There are several stages of illumination. For starters we have the basic patterns, which include a fully lit keyboard, a setting that breathes/pulsates or one that highlights specific gaming keys. These can be configured by adding new ranges of keys and manipulating the colours throughout the entire spectrum. These are not uncommon options, but once you look at a few of the other settings, you realise just how much fun Tesoro had in setting this up.

There are a couple of different wave configurations. Basically when you type with your left hand, it extends out towards the keys to the right in a wave-like motion. One washes over all of the keys, the other just along that horizontal row. There is a setting called fireworks, which essentially takes the keys you are typing on and radiates that key and the ones around it in blue and white. There is another setting that simply fades in and out under the keys that are being depressed. All of these are quite cool both in concept and execution as they provide a nice mix of interactivity and visual feedback. There is even a basic spectrum or rainbow mode where a range of colours rolls from left to right continuously along the keyboard.

Colours can be configured by going to the website and downloading the additional software if you like, but the keyboard itself starts off as simply plug and play. I hooked it up to my PC’s USB port and it ran through a roughly one minute driver installation and was ready for use. However, to get the most out of this keyboard, you will want to download the software. It installs quickly, does not require an annoying system reboot and just runs out of your task manager in an unobtrusive way. From here you can customise colours to be exactly the shades you want, but you can start to set up macros and profiles as well. This is great for players who want specific keystrokes to perform a series of tasks. 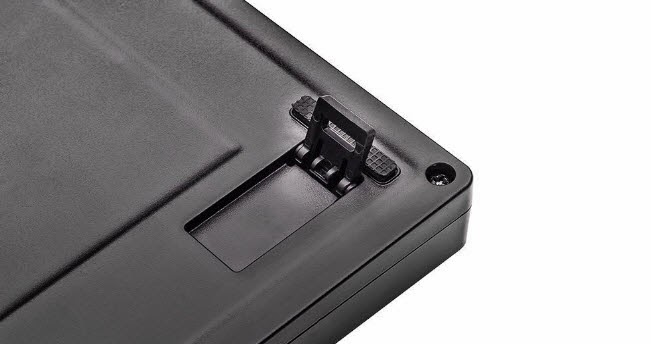 Every key can be programmed and the keyboard itself is of standard size and layout without any unpleasant surprises such as the half-sized backspace keys that many gaming keyboard manufacturers throw at people. There is a numeric pad on the right and the normal function keys lining the top. The keyboard itself is black, allowing the lights to shine through quite nicely. The keyboard durability is solid also. It has a sturdy heft at just over two and a half pounds, with keys that can absolutely take a pounding. There are some nice finishing touches as well in the form of a braided USB cable and the rubberised pads including the extendable back legs for those who would rather type at a slight angle.

If anything is missing from the design, it will be little things such as the lack of a wrist rest or USB/media ports on the keyboard itself. These did not particularly bother me since I have plenty of ports on my machine and I use a gel wrist support, but it is worth a note for people who look for those types of conveniences.

The Tesoro Excalibur Spectrum Keyboard does a lot of things really well. It is sturdy enough for those just looking to type a lot, those looking to program macros into it for gaming and the entire spectrum in between. For those who like a little more flash in their devices and are willing to spend a few more bucks to get it, there should be plenty of settings that you will enjoy playing with as well.

This keyboard can be found on the Tesoro website

The Friday Ten: Ten games we’d like to see made into live-action films