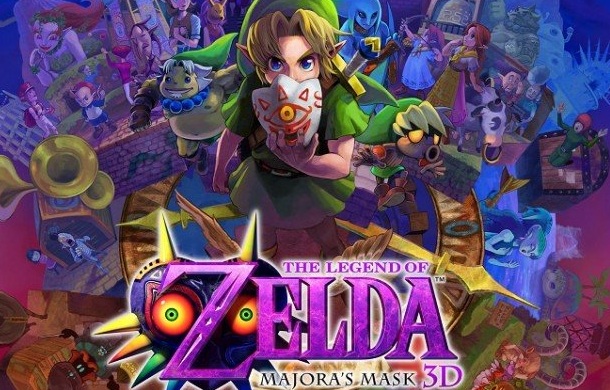 Majora’s Mask is one of the Zelda franchise’s standout titles for more substantial reasons than its overall quality. It boasts enormous gameplay departures from the rest of the series, a living world of intricately interconnected characters, and profound lore teeming with macabre themes just to name a few. It’s no wonder fans were so outspoken when requesting a follow-up to Ocarina of Time 3D because, even a decade and a half later, there’s still no game out there quite like Majora’s Mask.
Within five minutes of starting the game, the player’s sensibilities and expectations are turned on their head. The very same Link that fought tirelessly to conquer Ganondorf in the game’s prequel is not just stripped of his power but outright humiliated by being transformed into a cuddlier version of one of that game’s weakest foes by a masked imp. After arriving in the strange new land of Termina, the legendary Hero of Time is subjected to attacks by dogs he once befriended, discriminated against by the citizens, and deemed too young and frail to leave town on his own. Worst of all, Link is given three days that equate to roughly an hour in real time to get his human body back. Or he can fail and watch as the moon crashes into Termina.

Related reading: You can also check out Matt’s original review of the game here.

The opening is, in a word, jarring. It’s no mystery why some players gave up on the game back in the year 2000, but this segment of the game establishes the villainous Skull Kid’s malevolence in a way that directly makes the player feel oppressed and uncomfortable. This is vital because Majora’s Mask trades in much of the series’ trademark dungeon and puzzle solving for interactions with characters that have all been personally affected by Skull Kid in some way. Though it undeniably features high-stakes action, Majora’s Mask is not an epic journey so much as a half-gloomy, half-uplifting exploration of how humanity values life. 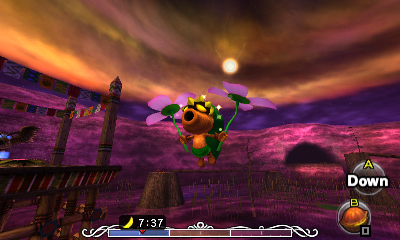 Given that Majora’s Mask was developed in a mere two years (a short period for a title of this scope and pedigree), it’s hard to parse just which meanings and messages were intended or coincidental. Player theories often highlight faith and forgiveness as key narrative elements while more “abstract” interpretations claim the story depicts the Kübler-Ross modelwith Link as the deceased centerpiece. One theme is an undeniable constant, however; impending death. By having players work to ease the sorrows of others as Link, the game shows players firsthand what the populace does in the wake of death.

Majora’s Mask approaches the concept of an apocalypse in a manner that encapsulates the feelings of most civilised societies rather well. There’s a civil war between realists and idealists (military Captain Viscen versus carpenter Mutoh), governmental disarray (Mayor Dotour’s struggle to make a decision about whether to evacuate his town), and the nuanced struggles of all the common folk caught up in all the chaos. A farmer plans to dull her younger sister’s pain by getting her drunk on alcohol (sorry, “milk” in the Zelda universe), an innkeeper aims to get married and face the afterlife with her missing husband, and an dutiful but anal retentive postman stews over his choice to not seek refuge from the moon. Virtually every denizen of Clock Town right down to the ones designed to facilitate the “game” elements offer commentary on their impending fate.
The fantastical Zelda characters are used to personify and embellish realistic viewpoints and this certainly adds a more accessible layer of whimsy and charm, but there’s an eerie legitimacy to it all that is used to stir player emotions. Many of these stories are cleverly told over the course of three days and take full advantage of Majora’s Mask’s three day cycle to deliver short but effective story arcs. The viewpoints aren’t merely littered about either; they’re all intrinsically linked. Mayor Dotour (who is involved in the earlier mentioned “tradition versus safety” conflict) has a wife searching for her missing son who is engaged to a troubled inn keeper who is close friends with a farmer who is having her milk supply raided by masked thieves who are the brothers of a disgruntled troupe leader who sides with the tradition end of the “tradition versus safety” conflict. I’m not even scraping the surface here; most characters have numerous tangible relationships with other characters that help flesh the story out with a level of depth most games don’t care to assign to NPCs. 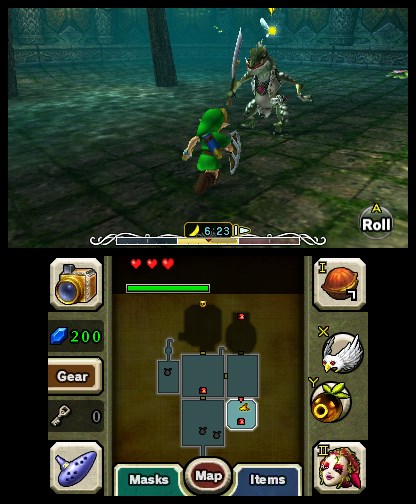 So why have I spent half a review rambling on about all this? Simple – the result is a world crammed full of nuanced characters that the player has every reason to care about. Players got to experience Skull Kid’s trickery firsthand during the segment played as a Deku Scrub and the story itself is like solving an ongoing mystery. This is absolutely essential to the enjoyment of Majora’s Mask because if you don’t appreciate partaking in sidequests, well, this game ultimately has little to offer compared to even Link’s Awakening on the Game Boy.

One of the well-documented “issues” with Majora’s Mask cited by detractors is that it features only four dungeon areas for fighting bosses, solving puzzles, and collecting keys; a paltry figure that represents the lowest number ever featured in the Zelda series. However, I feel that adding more dungeons would have arguably detracted from the game’s vision since each one represents a direction on the compass and the world has a peculiar flow to it unlike any other. A new one would have to serve some kind of narrative purpose or it would be glorified padding. Besides, the game features so many miniature challenges and mini-dungeons that I tend to avoid the grander ones for as long as possible.
I’d wager, too, that the lack of dungeons is made up for by the sheer diversity of the gameplay. In Majora’s Mask, Link’s line of weaponry isn’t all that impressive. Instead, he relies on masks that either bolster the power of his base form (such as the Bunny Hood, which increases his mobility considerably) or transform him into a new creature altogether. It’s possible to assume three major forms with their own combat styles and puzzle-solving capabilities not witnessed anywhere else in the series and this makes overworld exploration and battles far more engaging as a result. 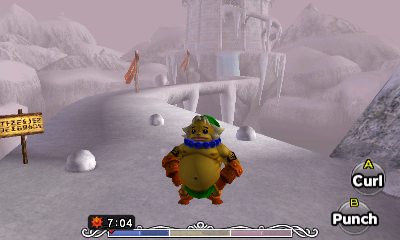 The masks definitely play a key role in establishing the ingenuity of this entry. While they do grant Link various powers as mentioned above, they also affect how he is perceived by the public. Link’s masquerading antics often elicit humour, such as when a master swordsman is wooed by the Great Fairy Mask and takes offense to the Mask of Scents for pointing out his lack of hygiene. Even the tutorial-oriented characters that reflect the traditional game elements are enthralled by these masks, offering various opinions on what Link is wearing. Transformation masks in particular open up a ton of possibilities due to the overwhelming change in appearance, with many characters believing Link has legitimately become the characters from which he received these powers. That part is actually deeply morbid if you consider the ramifications for too long, but generally speaking, the masks are powerful tools that expand the narrative even further.

As for the enhancements this remake brings, they’re definitely worthwhile. Aside from the glaringly obvious graphical alterations (which make the game positively gorgeous and infinitely more aesthetically functional than on the Nintendo 64), Nintendo and Grezzo have been far more ambitious with Majora’s Mask 3D than Ocarina of Time 3D. The new bomber’s notebook makes sidequest completion an absolute joy and considering optional quests are this game’s meat, that’s a welcome change indeed.
In general, the game has been polished to cut out a lot of unnecessary tedium. Players can warp through time more efficiently, time progresses at a brisker pace, important services have been moved to make time travelling simpler, more items can be equipped to save wading through menus, the notes for ocarina songs can be seen while playing, and players are often given more hints (which is fair because the original game was often a tad stingy in that regard). Gyroscopic aiming and a free-form camera option on the New Nintendo 3DS make archery infinitely more enjoyable. Bosses, item locations, and stray fairy locations have all been rejigged to keep players of the original game on their toes without damaging the source material. Oh, and you can now waste the hours away fishing up a storm at the various ponds littered throughout Termina. 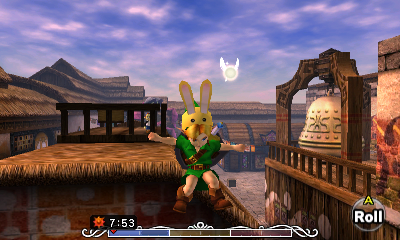 The big controversy, though, is that players can now create permanent save points at will instead of having to reset the three day cycle to keep their progress. Clearly this was done to make the game more accessible and suited to portable play, but I don’t feel it’s all that damaging to the narrative. Regardless of whether the player feels safer by having this optional privilege, every time you begin the cycle anew, your heroic influence is still rendered seemingly for naught as the game’s folk forget about all of your kind contributions to the world. Witnessing your efforts go to waste and being forced to leave innocents to return to their suffering every time and then seeing them wander the streets in their depressed states once more still offers the player sizable motivation to take down Skull Kid. Very few games explore the distress of the NPCs to the extent that Majora’s Mask does and this showcases the pure malice of Skull Kid’s actions without actually having to develop his character or delve into his psyche (although the optional lore does a fine job of that too).

And every time you wander through Termina Field, raise your bow or snap a shot of a bird, what do you see? The tortured face of the moon, staring back at you. That reminder of the fate that awaits all in the game’s world serves as chilling motivator for the player because, until your mission is successful, it’s never going to leave. Above all, the time-defying items you borrow from each NPC are very tangible vestiges of your bonds with them and are a constant reminder of what’s at stake (just in case that moon glaring down at you wasn’t enough).
Majora’s Mask is an exquisite AAA game brimming with artistic direction and ideas that have yet to be meaningfully replicated elsewhere. This is a special type of story that could only be communicated coherently with video gaming as the medium. At the very least, it’s one of the industry’s early examples of complex world-building and still an immensely successful one today.
If any game deserved a second lease on life, it was Majora’s Mask. This remake plays its part admirably and I sincerely hope it inspires today’s players to think deeper about the worlds within their games.

– Clark A.Anime Editor
Email me at: clarka@digitallydownloaded.net
Sign up for our weekly newsletter! Exclusive content to your inbox!