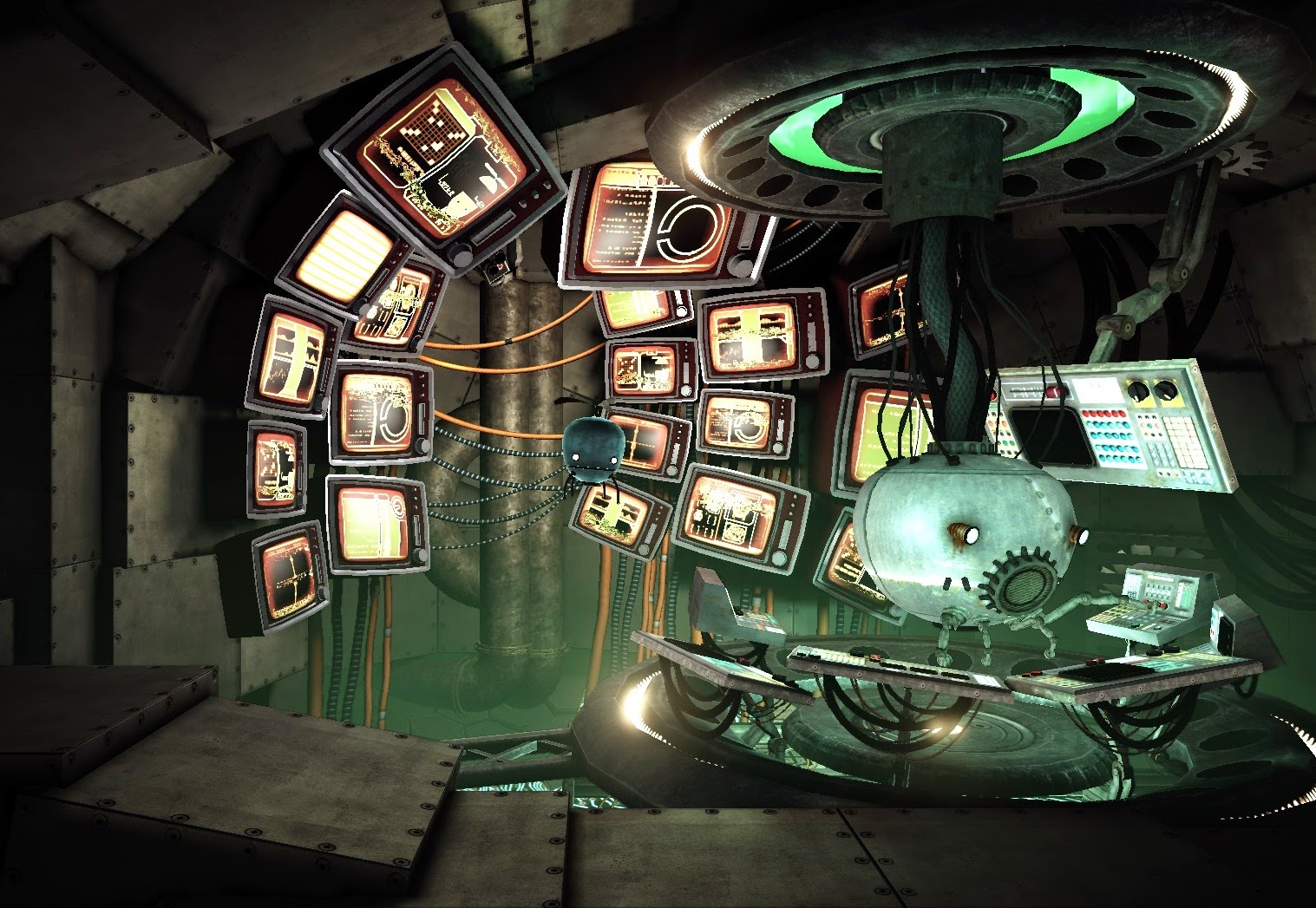 Unmechanical is a puzzle game that has an incredibly strong emphasis on its art and themes. From the opening moments, the player is introduced to two clashing themes. A natural environment, filled with rolling green hills is overshadowed by a booming industrial landscape in the background. When players start to delve deeper into the game’s underground, they find a mix of both organic and industrial, further highlighting the contrast between the two.

Tunnels have been caved out of underground lakes, while buildings have been digested by giant organisms. In the centre of all this is a beating heart that is being kept alive by all the machines around it.

This is how I interpreted Unmechanical. What I presumed to be a game about clashing forces, ended up being more of a mutual symbiosis between the two. Much like any form of art, meaning is derived from how the player feels and what they witnesses. With so many different ways to approach Unmechanical, as there is nothing that players are being forced to look at or understand, there is room to hold discussions about this game beyond the game that help us enrich our experience of it. Nothing makes me happier then seeing small development teams try to push for something much larger and in the process create a game that transcends being a game. 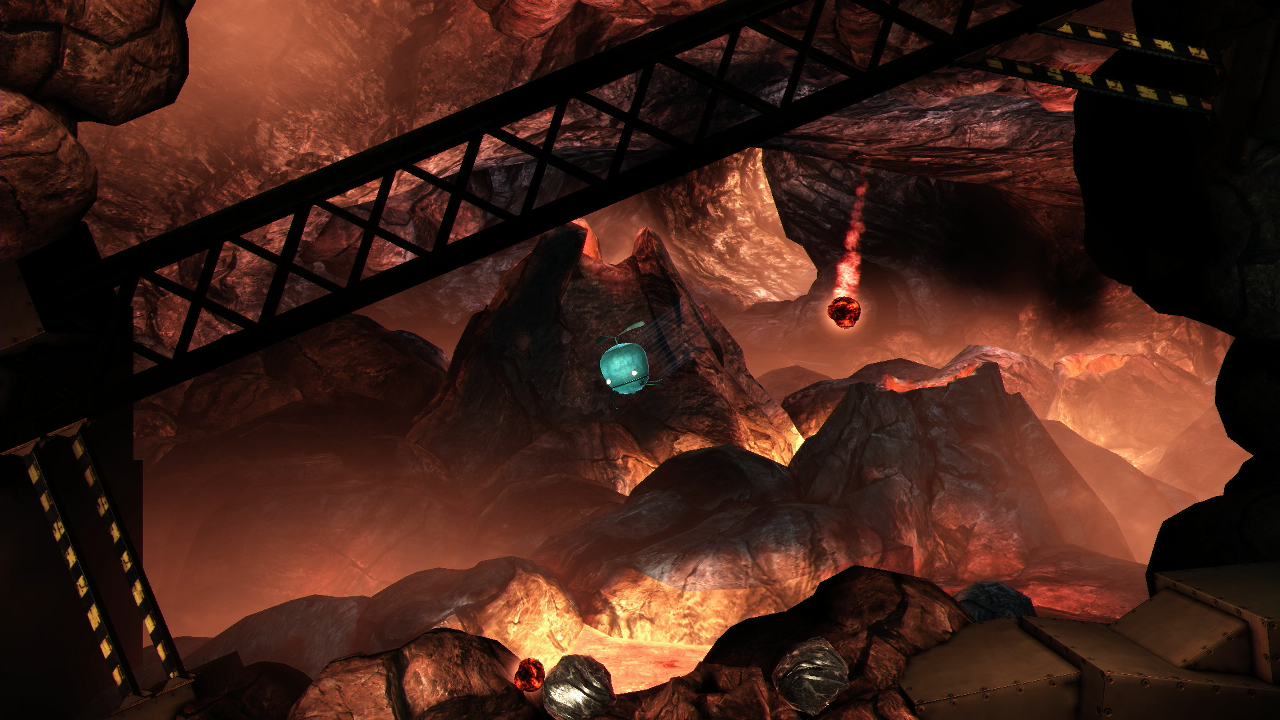 Unmechanical is first and foremost a puzzle game. You control a robot that has been taken underground by unknown forces. There’s no goal, you’re just slowly progressing through the levels. The puzzles do tend to be on the easier side of the scale, but combined with the simplistic control scheme (control stick to move and any button to use your tractor beam to help navigate through the game’s various problems), it allows the puzzles to step aside while the player looks beyond. There is one really good puzzle near the end of the game that really forces you to think about what you’re doing it and how it’s affecting things around you. Aside from that however, the lack of creativity results in the tired and tested puzzles of layers and mirrors, Simon says, etc.

The visuals are really what allows the game to be looked by players in certain ways. Although I haven’t experienced the iOS version, I feel that having Unmechanical played on a high-definition system really allows players to experience the true intention of the developer. You can see tiny details in the environment around you, and it transforms Unmechanical from a 2D game into something which much more depth. And, while there’s not much to be said about the music, the sound effects help cement the player in their immersion. 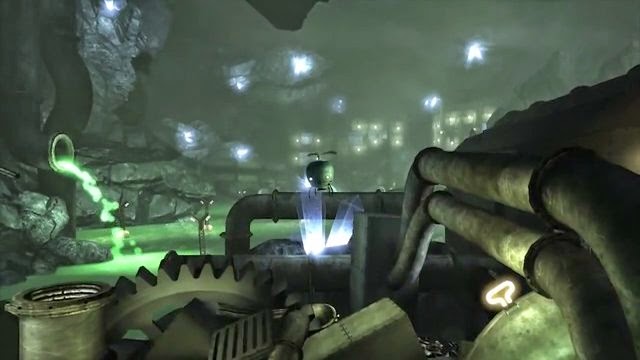 This updated version also provides players with a new episode entitled Extended. Rather than focusing on the dynamics found within the first game, it looks at relationships. This time two robots are pulled underground, and they work together to move through the underground labyrinth that awaits. Again, the quality of the experience is solely dependent on what the player feels and sees, however it also doesn’t leave the same impression of care and effort that the original game enjoyed

I do think this is a very strong puzzle game. Not so much because of the puzzles themselves, they are basic and most players won’t have too much trouble with them, but what makes Unmechanical special is that it is different. The puzzles aren’t meant to be challenging. They’re a vehicle for the player to experience the themes around the game. Rather than telling a story it forces players to actually think about what they’re witnessing and how they’re interpreting this information. Unmechanical allows players to discover everything on their own, something that I think a lot of game developers have forgotten how to achieve successfully.