Double Dragon is one of the most well known arcade beat ’em up titles ever made and the franchise’s enduring popularity has convinced DotEmu to bring them to your modern PCs. The trilogy package consists of a port of Double Dragon 1, 2 and 3, and being a fan of Double Dragon 2 on the NES, I couldn’t resist the nostalgia to dip into these again.

This is a decent port of the three games with some little bonuses and a few odd changes. In terms of how they play, they are virtually unchanged from their original arcade counterparts. They can be played at 1600 x 900 resolution and players can tweak options for video filtering and scanlines, but I would not recommend doing this as it just makes the screen blurry. But in terms of the aesthetics, there are some really odd changes that have been made. The player information HUD, and the ugly health meter, score bar and tasteless time clock graphic, clashes completely with the rest of the game art. As a result the games look very amateur, and I would have rather the developers stick with the original aesthetics. 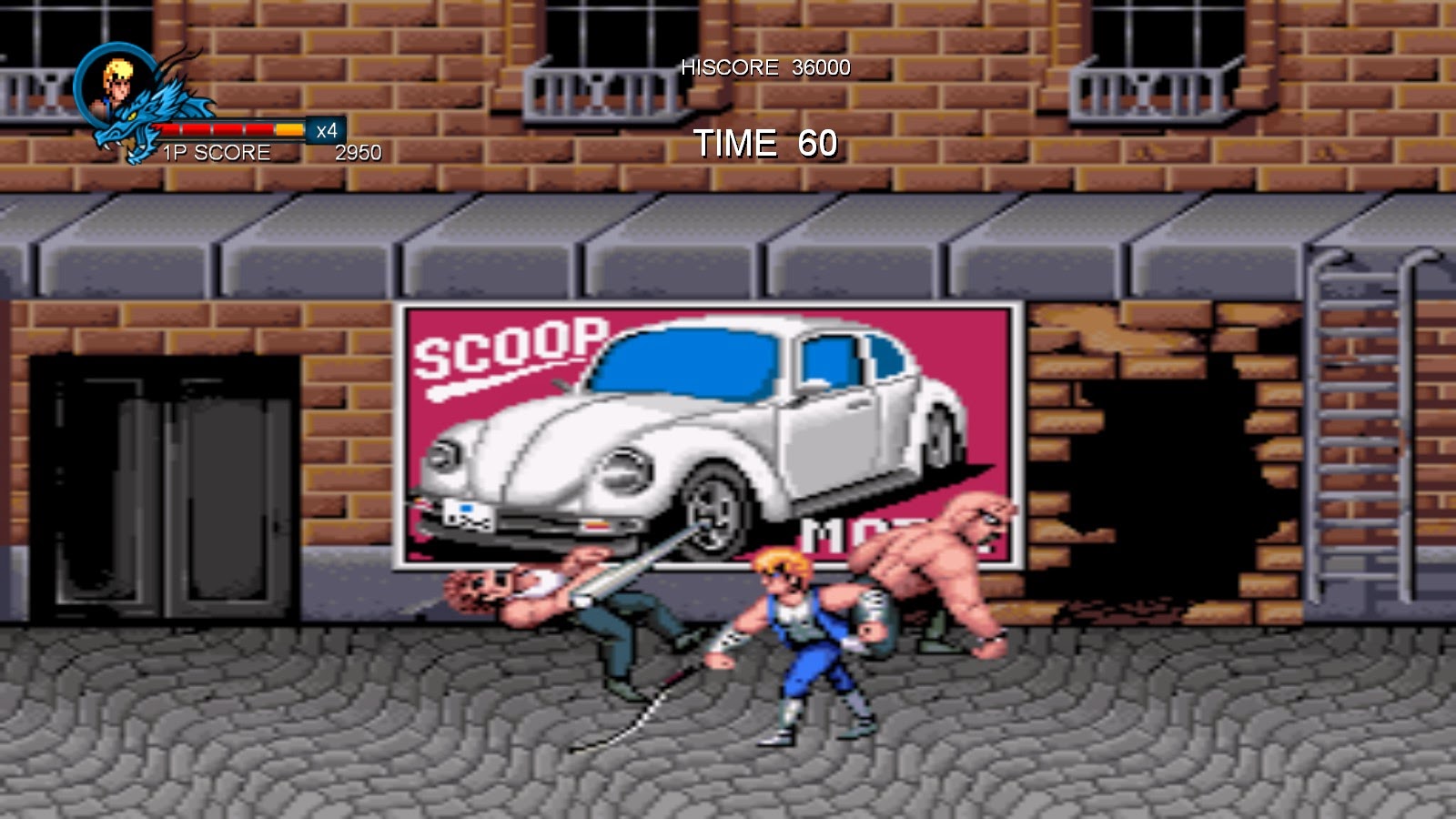 In other areas, the effort to update the games improves the experience. You can select to play the game with an updated remixed soundtrack, or the original 8-bit soundtrack if you’re in the mood for some nostalgia. Weirdly though the port of Double Dragon 3 does not have a remixed soundtrack. While the remixes can’t be faulted and the only reason you would want the original soundtrack is for that occasional nostalgia rush, it’s still a very odd omission.

Whether you enjoy the game depends on whether you like repeating the incredibly simple gameplay loop of beating up bad guys, moving right, and beating up some more. Each game has three difficulty levels; easy, original, and expert. This makes a playable experience for beginners and ancient masters of the game alike. Of course “original” is the same difficulty as it was in the arcade. And it’s worth remembering that as good as you’ll feel if you can beat the game on that difficulty setting, as an arcade game it was designed to beat you as quickly as possible, so levels rarely feel fairly designed. And then, when you play it on a lower difficulty level, it loses the sense of achievement that meant people would spend a fortune on the original arcade cabinets. For those who like to compete, there are online leaderboards for each game and for each difficulty level, which at least adds the bragging rights in there. 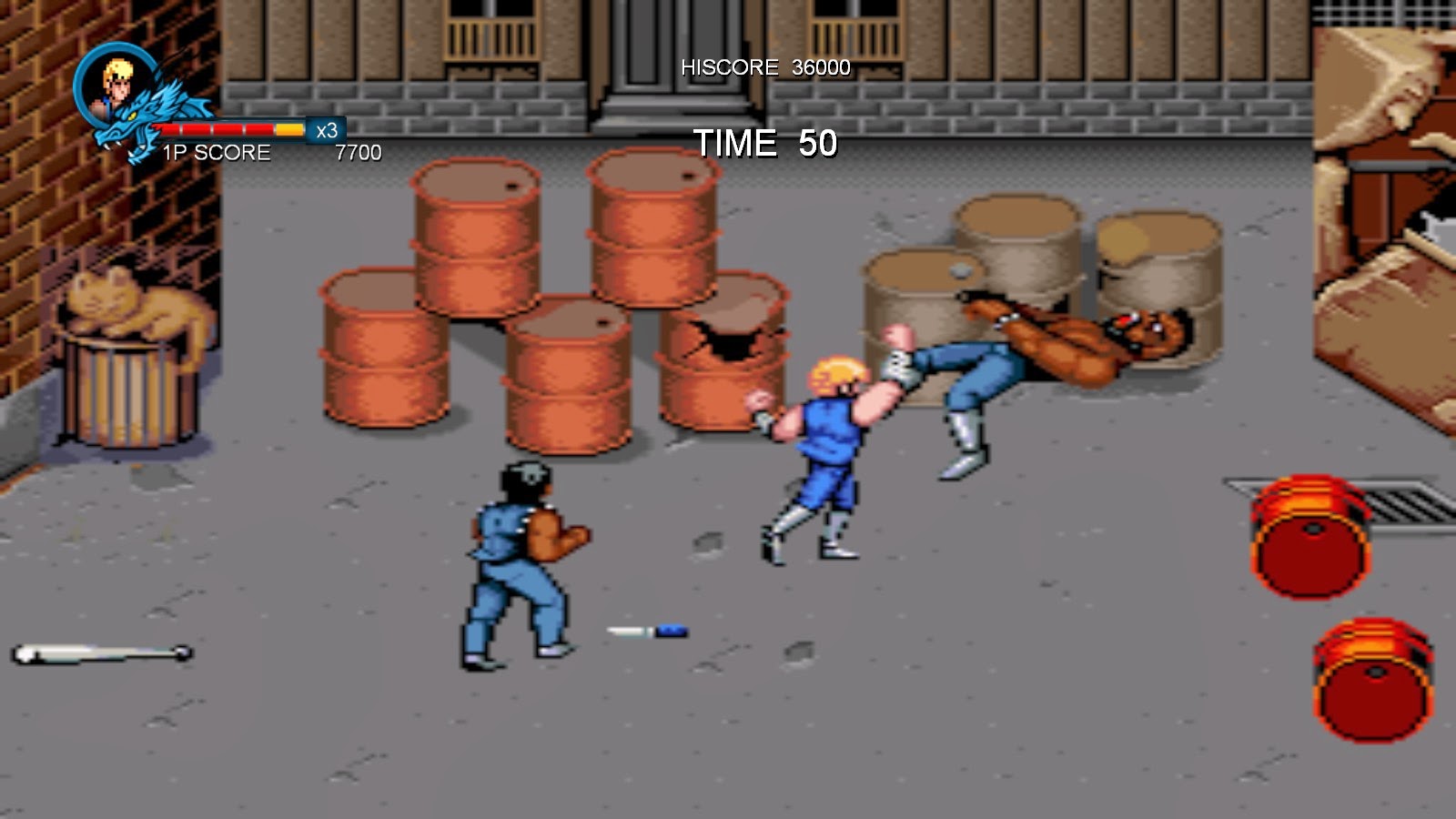 There is local and online multi-player for all three games so whether your friend is sitting next to you or lives far away, you have the tools for an enjoyable co-op experience. When I tried to play the game online it was very laggy, but Steam was acting up at the time. So if this was the result of Steam’s performance or the game’s, I can’t say. And sadly, it’s not the busiest online community; every time I looked for an online game, I couldn’t find anyone to join with. Local play works fine though and is a lot of fun to play with friends or family.

Related reading: For an idea of what Double Dragon can look like when remade for the modern era, Double Dragon Neon is your game.

Overall, it’s a decent trilogy for the price, but length of play time is rather short once you’ve memorised the patterns and can overcome each game’s arcade-style tricks and traps. You can beat all three in a few hours, but playing through in co-op and maxing out the difficulty will stretch things a bit. There’s a dash of the old “the memories are better than the reality” when it comes to the Double Dragon games, but they are still decent fun, even today.