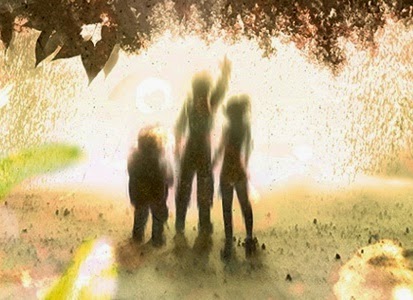 The story behind Pier Solar and the Great Architects is more interesting than the game itself. Originally a homebrew project that saw a release on the defunct Sega Genesis, the developer, WaterMelon, saw potential in the download platforms on modern consoles to rerelease the game in HD form.

The team took to Kickstarter, and Kickstarter took to the game, with pledges nearly doubling the asking goal of $139,000. Fully funded, the game was delayed a couple of times while in development, but is now available across the major consoles, so now everyone has the opportunity to play one of the more famous examples of homebrew development. 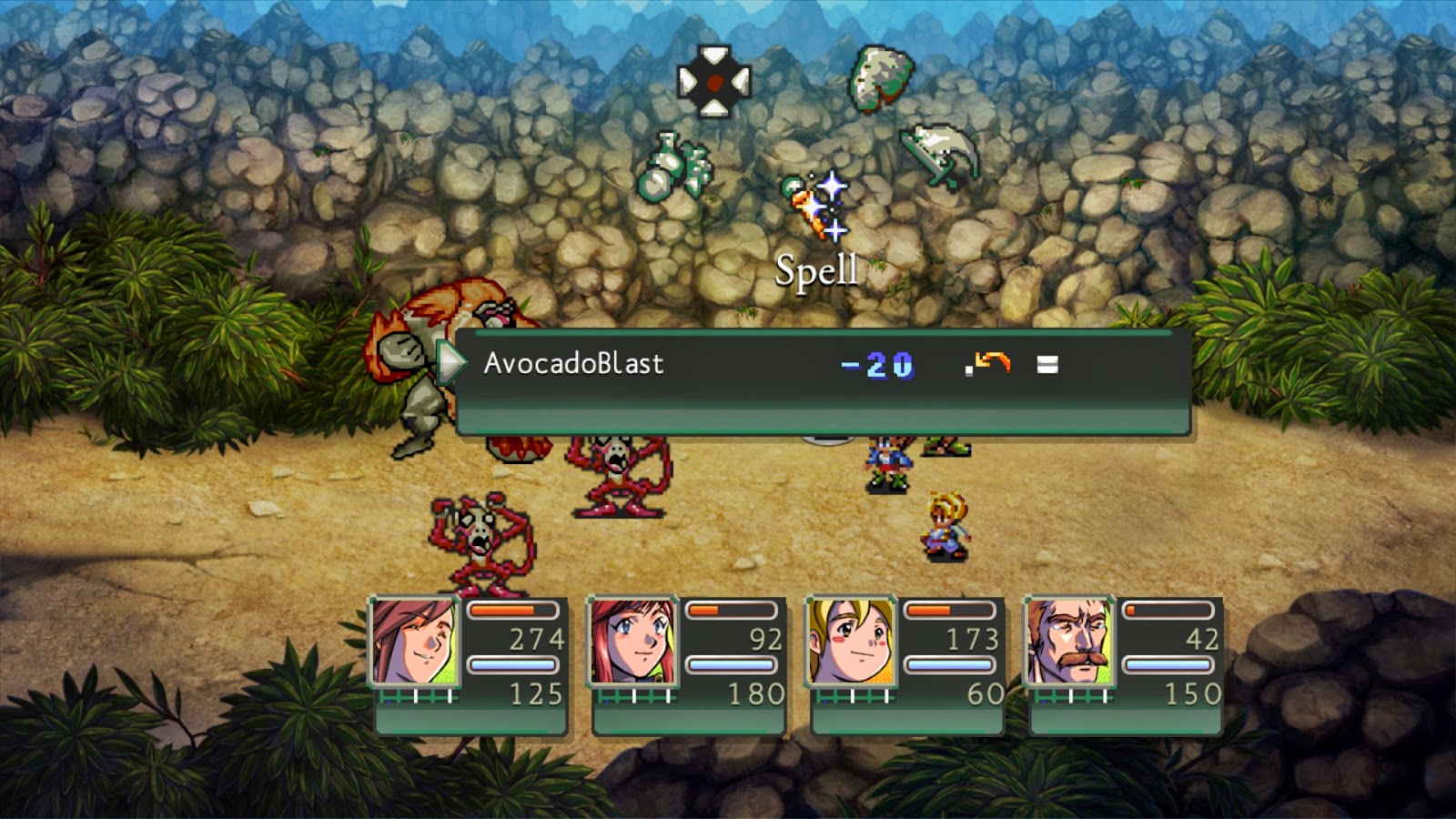 The problem is, I have no idea why anyone would want to play this. To be as brutally honest as possible it’s terrible, and not even in the so-bad-it’s-fun sense of the word of those deliberately B-grade games that are out there. Pier Solar is a terrible, generic JRPG with truly aggravating gameplay quirks that would have been the source of much irritation a decade ago, let alone in comparison to what we get in JRPGs now, and the developer didn’t even have the good sense to have some fun with it.

Within the first half dozen hours every single cliche of the JRPG genre you could possibly imagine has been thrown into the game in the most clunky and inefficient manner possible. A band of young kids team up to wander deep into a forest to find a herb that has healing properties, which the father of one of the kids badly needs (or else he’ll die). There they discover ruins wondrous and ancient, and because they’re not meant to be in there they are reprimanded when they return. Then one of the characters decides to run away from home, and the other two decide to go after her. The epic quest commences.

It sounds juvenile, doesn’t it? That impression is amplified a hundredfold with dialogue that reads like it came directly from a book of generic phrases for people building RPG Maker levels. Now, this is understandable, given that it does come from the homebrew community which behaves much like the RPG Maker community, and it is great that people have such a passion for the JRPG genre that they would go out an build their own love letter to it. But, once you start charging people for a project, amateurish storytelling and dialogue such as what Pier Solar offers ceases to be acceptable. Because the writing is so poor it’s hard to get engaged with the world, and not once did I care about what the characters were doing or what was going on around them. 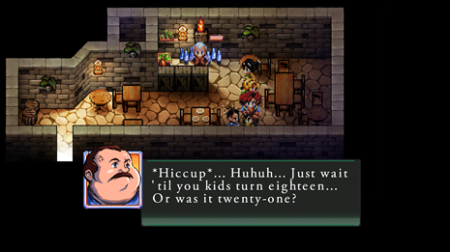 Is it entirely necessary for a JRPG to have a quality narrative to be worthwhile? For the most part, I believe so. A good JRPG has a good combat system as well, of course, but ultimately people are coming to these games because they want a well-told story filled with interesting characters. They want an interactive Lord of the Rings, Game of Thrones, or Star Wars, if you will. Pier Solar doesn’t offer that, and so throughout the entire adventure I found myself wondering why I was not playing something else. With that being said, Pier Solar doesn’t get the gameplay right either. It’s a completely generic turn-based system that plays out painfully slowly, a frustration that is exponentially more irritating in this game given how frequently the random encounter rate is. I get that Pier Solar is channeling the old Final Fantasy and Dragon Quest games, but for reasons I’ve already mentioned it’s not even close to as interesting as those, and it badly needs a patch to drop the encounter rate to somewhere south of throw-the-controller-at-the-TV frequency. What made Final Fantasy and Dragon Quest random encounters tolerable was the simple but effective narratives, not the combat system, and I don’t think the developer of Pier Solar understood this.

Enemies follow predictable attack patterns and have weaknesses that are immediately familiar to anyone who has played more than a handful of retro RPGs. The ability to customise characters is also sharply lacking. This is on par for retro JRPGs, so it also makes sense to an extent that this game follows suit, but is also no longer acceptable since we’re now used to playing games that allow us to create teams and characters that suit our own personal play styles and strategies. It’s fine for developers to target a retro aesthetic, and we’ve seen games like Rogue Legacy and Shovel Knight do it brilliantly, but there are some basic modernisations that they should make to adjust to the new best practices towards game design that we’ve seen in recent years. Rogue Legacy and Shovel Knight managed to be retro-styled games that did away with old-school irritants. Pier Solar is simply stuck in the past.

The presentation hasn’t escaped the amateur touch, either. The soundtrack is universally grating with very few tracks that are more than (too) short loops. The visual presentation aspires to be classically retro but too many areas are difficult to navigate around thanks to messy colours that make it difficult to distinguish what can be walked around an interacted with, and what can’t be. A useless map doesn’t help there either. 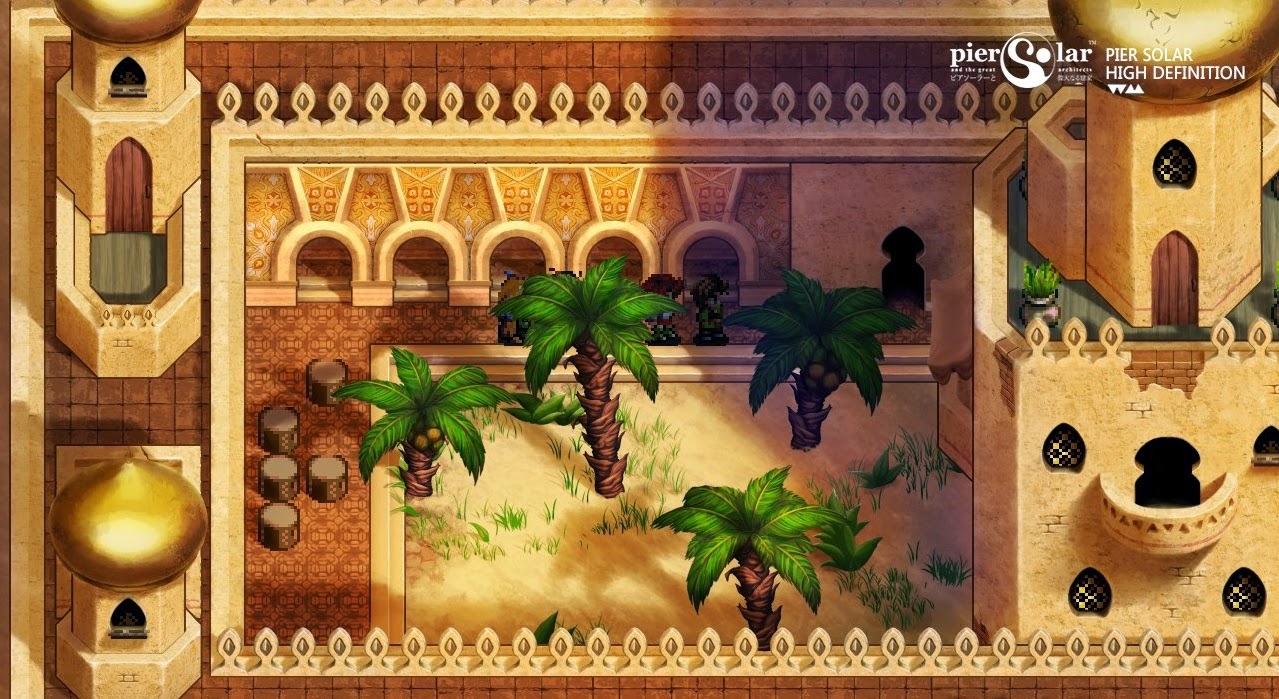 There are other niggling issues that really should have been updated for a modern game release, such as vague directions that left me wandering around confused about how to progress the story, and some really poor controls that have a tendency to send characters in the wrong direction.

It’s great that the developer wanted to create a classic JRPG experience in Pier Solar, and I do hope that everyone that bought into the Kickstarter were happy with the end result. However this game wouldn’t have been especially popular back on the Genesis if it was a commercial product, not when the likes of Final Fantasy VI and Chrono Trigger were flying high. Now, rereleased and unmodified from its original gameplay, it is beyond archaic and outdated.