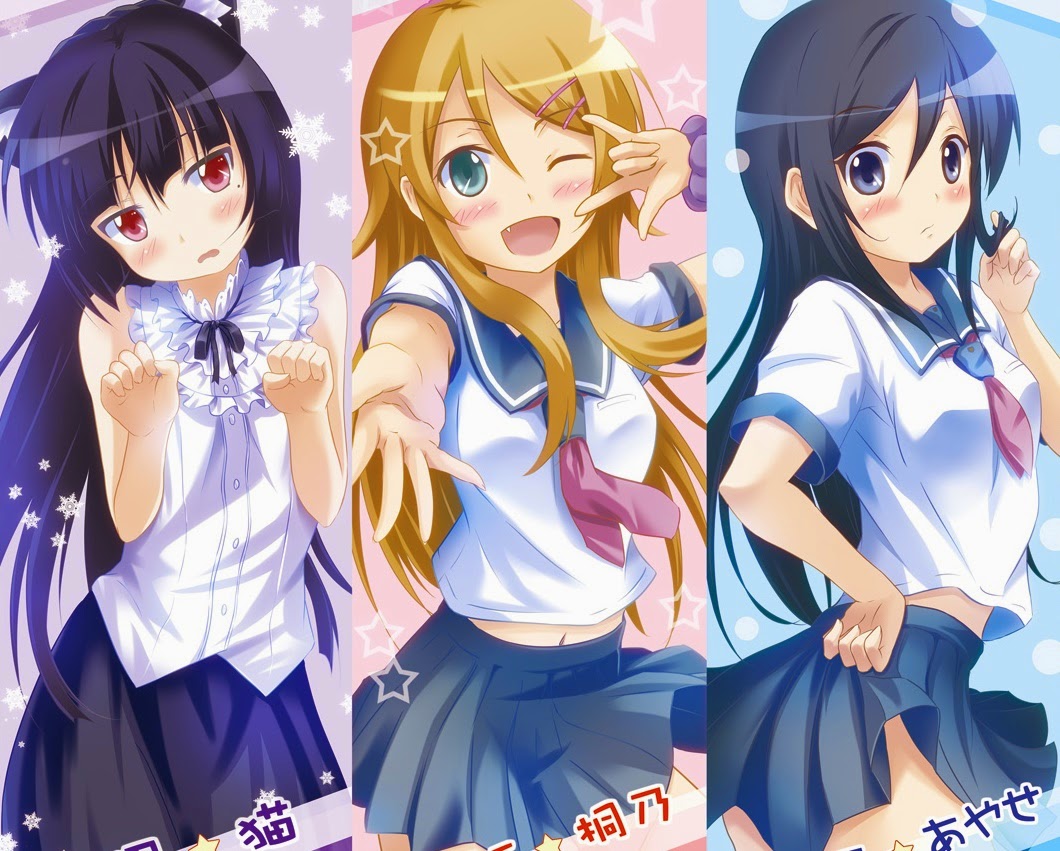 I’m glad that I have watched Oreimo. See, next time someone tells me that such-and-such anime is ‘creepy’ I can respond by saying “nope, seen worse.” That’s not to say it’s eroge, and it’s not explicit in its content, but as a story of incest, it’s hard to imagine any but the most fringe of adult anime topping this one for raw creepiness.

Oreimo is short for Ore no Imōto ga Konna ni Kawaii Wake ga Nai, which in English means My Little Sister Can’t Be This Cute. Yep. It’s the story of Kyosuke Kosaka, a 17 year old teenager that has a hopeless attachment to his little sister, 14 year old Kirino Kosaka. She acts cold and demanding towards Kyosuke, in true tsundere style, but manages to get insanely jealous the moment her brother associates with another girl. They are both incredibly protective of one another, and yet while their entire social circle notices clearly how attached they are to one other, both resist any implication that said friends might make about their relationship.

And within that context we have the main thrust of the narrative – one of the two will do something to annoy the other, and then the other will return the favour. It’s designed to be a comedy with the situations becoming ever more ridiculous (especially for Kyosuke, who is a hopeless loser), but it really boils down to a narrative which is deliberately holding off on the climax – the moment where brother and sister come to full realisation that they have romantic feelings for one another. And that’s very creepy from the very core of the anime’s theme, but cleverly so – the storytellers are able to explore the theme without actually being explicit in the process. 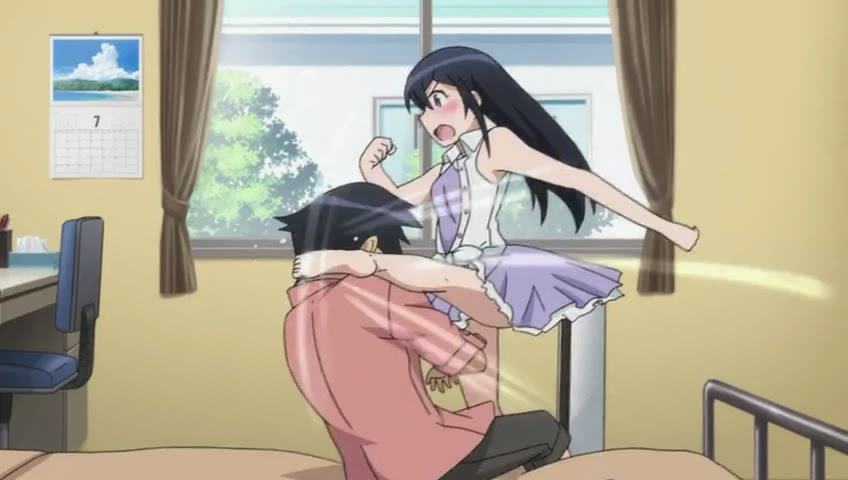 For whatever reason little sister love is a thing in Japanese anime and games. Oreimo makes a direct reference to it as the Kirino is an closet otaku that enjoys little sister love eroge games, and if you ever take a trip down to Akihabara and walk into a certain kind of anime store there you’ll see plenty of that content first hand. What’s perhaps most interesting about Oreimo, however, is that it’s far lighter on the fanservice than you’d expect to see in this kind of genre. In fact, it’s almost completely free of it. Were it not for the fact that the two characters at the centre of the story were brother and sister (and of such an age gap), then it would actually be an innocent enough, albeit silly comedy.

It’s also not a satire, and this is a sore sticking point for me. I’m a firm believer of the value of satire in deconstructing and criticising culture, sub-cultures, and exploring concepts behind the controversial little things that creep into a society. Certainly incest fantasies are a common enough trope in various entertainments in Japan that a satirical take on them would hold merit, and we actually see such a concept covered intelligently in other anime, such as Nisemonogatari. But Oreimo is just a comedy. It’s situational humour without the broader level of social consciousness that would help to justify some of the themes it explores.

I don’t think it’s from a lack of trying, either. Running through the narrative is what appears to be a commentary about the way that gossip functions within society, with a lot of the humour relying on the way information is spread through gossip. But it’s an ultimately underdone theme and I don’t think viewers will come away with any kind of insights from this anime. 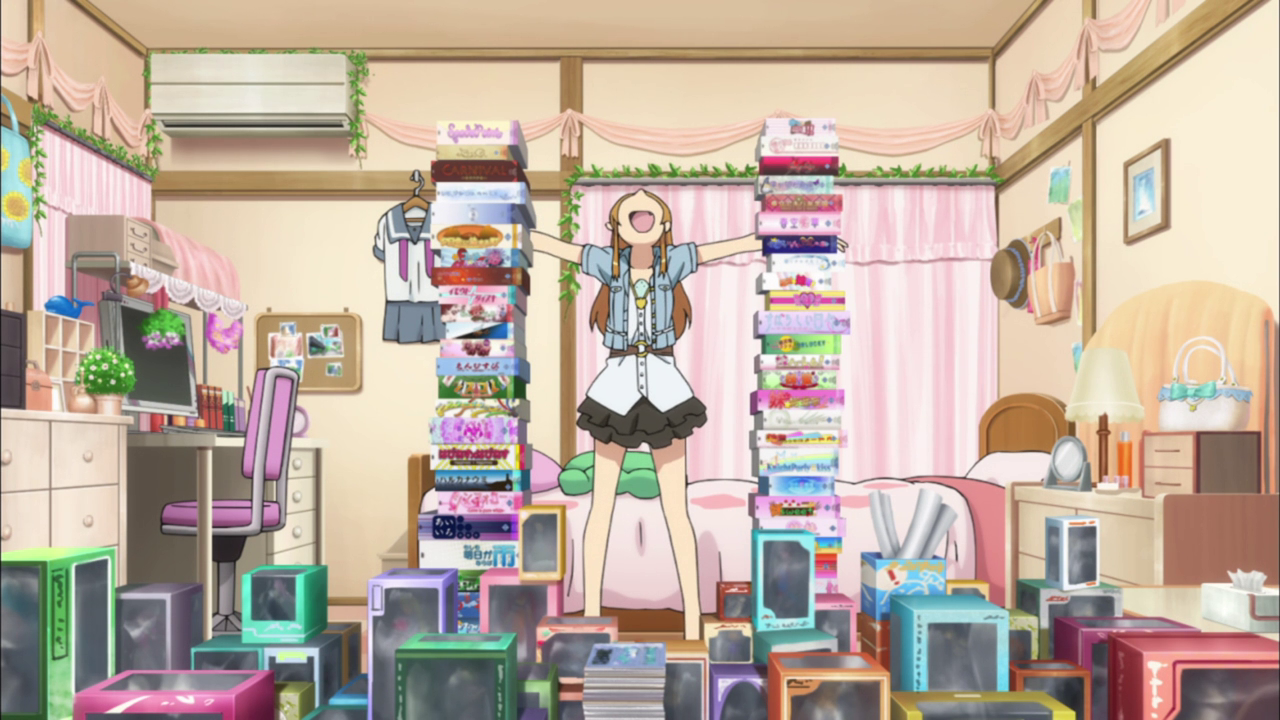 What I can’t fault is the presentation. The characters are cute and the voice actors are all appropriate for their characters. The DVD package itself is also superb, filled with all kinds of extras from the basics (textless songs), through to the unusual (short additional movies and mini-episodes featuring the characters drawn in SD style). These are the kinds of extras I expect to see in anime DVDs if publishers want people to continue to buy them rather than rely on streaming.

It’s also worth noting that you do not need to have seen the first season (which might be difficult to find now) in order to understand what’s going on in this season. The plot narrative is simple enough and character archtypes are basic enough that they’re easy to understand based on whatever experience you have with other anime.

Related reading: Are you looking for an anime-themed Christmas gift? Here’s a list of ideas!

Those extras aside though, it is difficult to get along with Oreimo 2. For an anime that is almost completely free of sexual content, the themes are, simply, creepy.