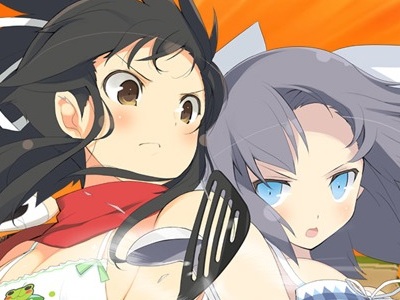 Senran Kagura is a franchise known for its busty women just as much as its frantic, fast-paced brawls. The series has raised many an eyebrow for reasons you can decipher within seconds of viewing just about any screenshot, but it has always struck me as being fully aware of how over the top it is and embracing that.
With that in mind, Bon Appétit might just be the most insane game to ever bear the Senran Kagura banner. The plot boils down to an elderly martial arts teacher wanting to surround himself with a double dose of scantily clad women and fine dining (double dose… DD… oh you punny man, Clark – ed). Putting a prized ninja scroll capable of granting any wish on the line as incentive, the aforementioned endowed shinobi flock to his competition to fulfill their dreams. This brand of outlandish humour is just the tip of the iceberg, however. 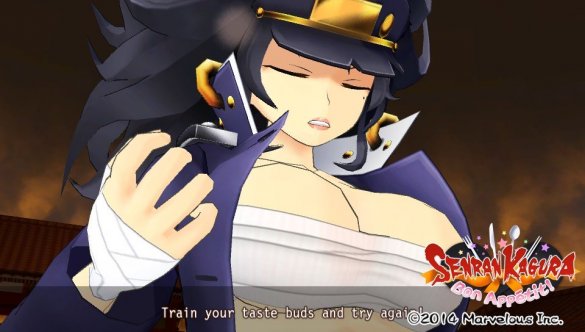 In fact, a detail as vital as the game’s genre seems to be a point of comedy. Senran Kagura titles have chiefly aimed to be action-heavy sidescrollers since the IP’s inception, but this spin-off toys with the expectations of anyone who hasn’t bothered to actively seek out the details. This game’s subtitle, Bon Appétit, and its plot imply the player would actually in the act of cooking, presumably in similar vein to Cooking Mama, but the result is far more reminiscent of Dance Dance Revolution in practice. Elements of the series’ trademark combat are present and the cooking theme is represented by on-screen montages of the kitchen-based warfare, but this is a rhythm game through and through. You’re going to be doing anything butpreparing meals or engaging in fisticuffs, in other words.

Tapping the directional pad and button inputs in tune with a musical score suited to the ensuing shinobi shenanigans grants you points that improve the taste of your meal. Succeed and your opponent in the cook-off will have her clothing miraculously rip and vanish into the ether (and overeager cameramen adjust their shots accordingly).
At the end of the day, it’s not going to win any awards for creativity (let alone give Hatsune Miku a run for her money except in terms of her chest size). To be frank, none in the game’s quaint selection of a dozen or so songs are overly memorable. The controls are based on a system that has existed for well over a decade. Even the…”transformation”…sequences become repetitive rather hastily as the player witnesses these upwards of three times per battle. 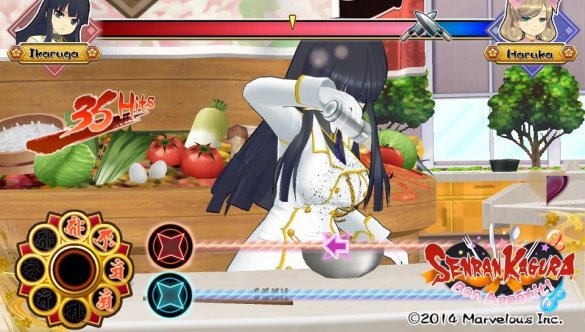 Ultimately, the gameplay is pretence to mould a rather comedic script around. That’s a risky aspect to focus on considering the tendency of comedy in games to fall flat, but thankfully it works wonders here, bolstering the absurdity and shock value of an already preposterous premise.

Each character campaign is stewing with more innuendo than an Italian suppository. XSEED went no-holds-barred with the localisation, though, and each gag is able to shine as a result. I found myself pursuing playthroughs with every playable character and tempted to snatch all the DLC due to the readily apparent ludicrousness of it all. The not-quite-cooking is just addictive enough and passable in its mechanics that I can stomach it enough to get to the game’s real meat.
Granted, that’s also where Bon Appétit disappoints me most. Although I did feel inclined to purchase the extras thanks to the game’s overall quality, I couldn’t shake the feeling that a content deficiency factored into the equation. As hilarious as each story is, they’re all broken up into very brief dialogue segments that always left me wanting more. The result is a far cry from, say, BlazBlue’s story mode. I don’t expect the world from the spin-off of a niche series made on a budget, but factoring in the considerable quality of the game’s writing and the relative blandness of the “game”, condemns this experience to be of less consequence than its full-fledged retail contemporaries that boast similarly over the top aesthetics. 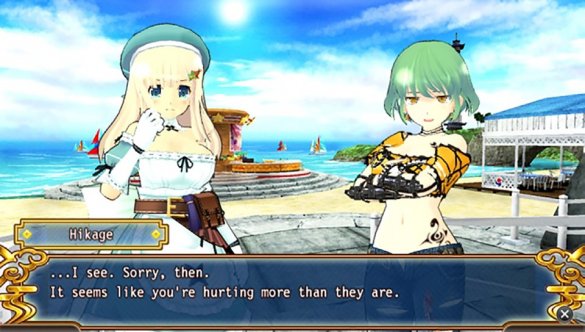 And just to shed further light on the game’s “fanservice” (because although there’s every possibility this series’ characters and themes were designed in jest rather than for titillation, this game really goes all out with the flesh), Senran Kagura doesn’t disappoint. Monster Monpiece might’ve had players rubbing up moe monster girls but it’s child’s play compared to how utterly transparent Bon Appétit! strives to be. The key distinguishing factor between the two is narrative tone; Monster Monpiece was a surprisingly serious affair that, for all the rubbing, didn’t make a big deal of it, whilst Senran Kagura delights in borderline exhibitionism with certain characters.

Besting competitors by achieving a perfect dish results in such scenarios as your high school ninja pals becoming chocolaty-coated, whipped cream-flavoured ingredients in a not-so-subtle dessert. Some even straddle overgrown bananas or incorporate similarly phallic imagery into the equation in a manner that will either arouse, revolt, or having you busting a gut depending on your disposition.
At first glance the beat ‘em up turned cooking sim turned rhythm game appears to suffer from an identity crisis, but Senran Kagura Bon Appétit! is a light-hearted comedy above all else. It’s as niche as games come thanks to its flaunting of risqué material subject to all manner of misunderstandings, but Bon Appétit! is effective as a silly pastime.