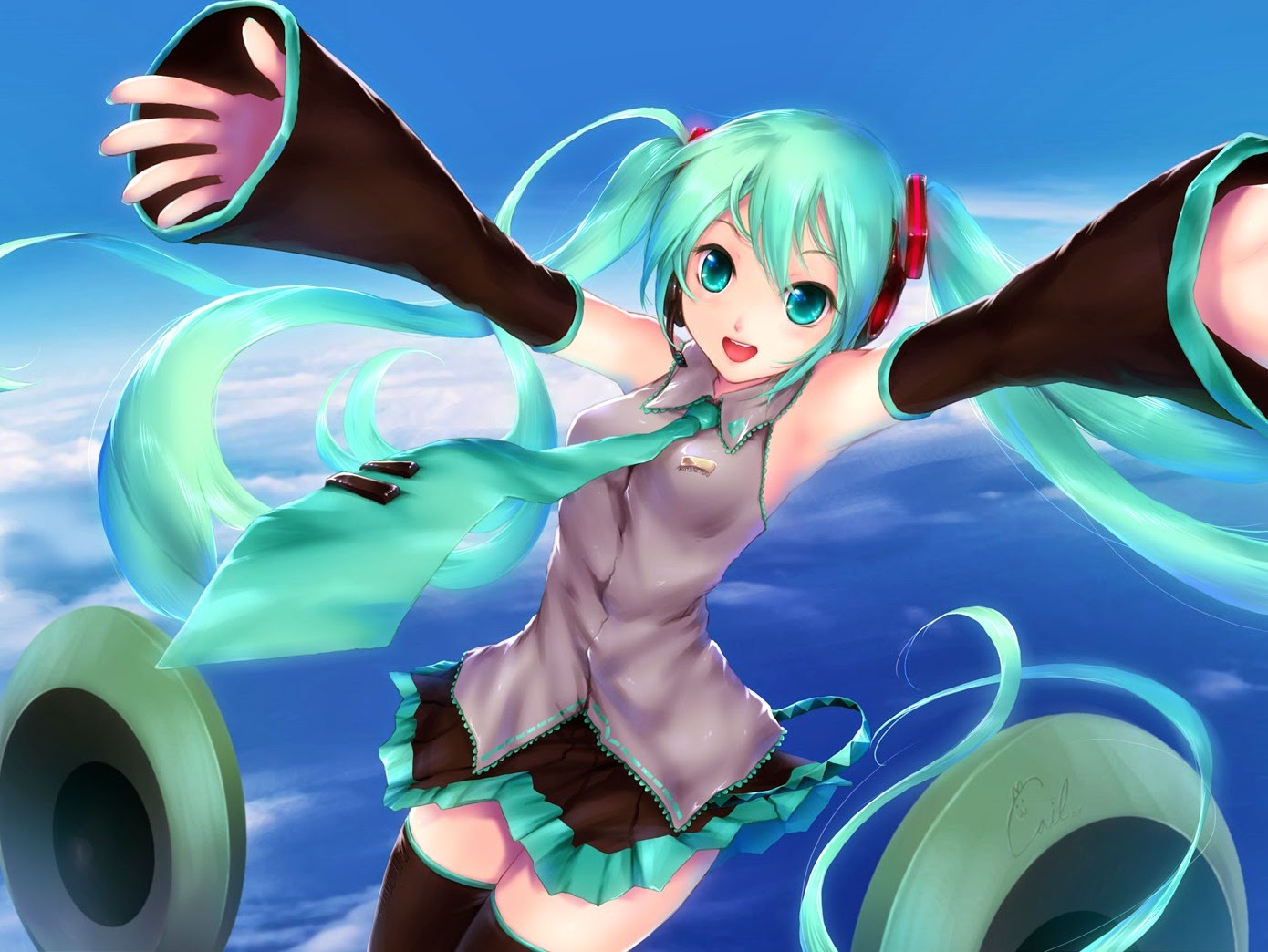 Here’s why I love Hatsune Miku; she represents truly democratic music making. For the cost of a piece of a software (about $100 Australian for the base vocaloid software, and then $150 for the Hatsune Miku voice plugin), anyone can take a now-iconic music “voice” and build whatever music they like with her as the star.

Think about it. If I was to write a killer pop song, and then ask any human performer to sing it, I would be looking at thousands of dollars for a single recording session. Hatsune meanwhile has voiced over 100,000 songs now. She’s even appeared in real-life concerts. She’s every bit the idol that her living counterparts are now, especially in Japan, and yet she’s available for anyone with an idea for a killer song. And so she represents a genuinely inspirational… person… in music, and one I support on principle alone.

Miku isn’t the only vocaloid out there, of course, but she’s the most popular one by a significant margin, and so while Project Diva f actually offers a wide range of tracks sung by a handful of different vocaloid performers, it’s no surprise that the entire game is not-so-secretly about Miku. It also plays right into her idol pulling power; where most music rhythm games start and stop at the actual music, Project Diva features dozens of unlockable costumes to dress the characters up in, and even a virtual living room where you can give gifts and develop a better relationship with Miku. And perhaps the other characters, but I didn’t bother to check those. 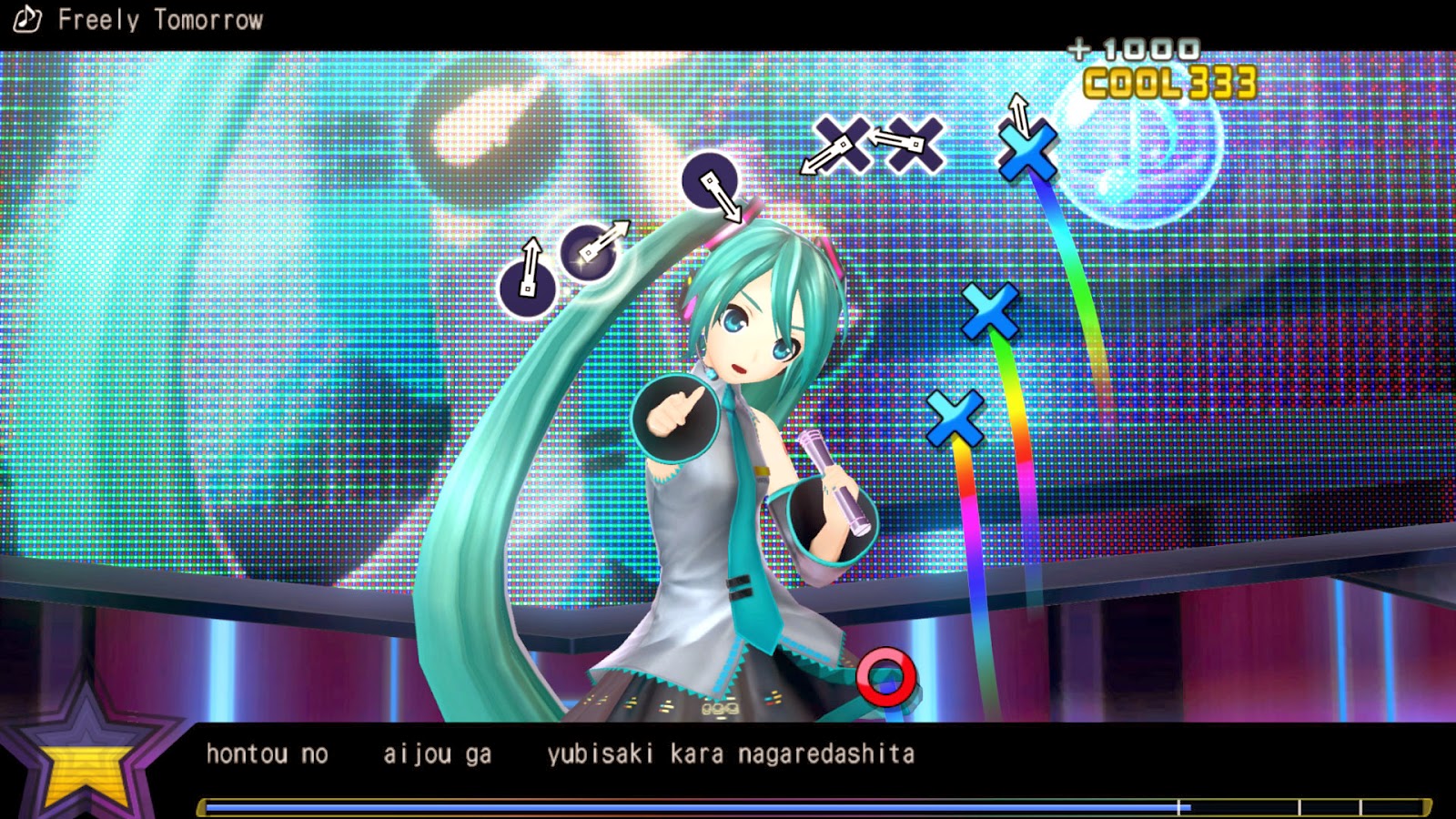 These features are all nice-to-haves, but the real core of the game is the music rhythm game, and frankly it’s one of the best I’ve ever played. There’s a real wealth of songs covering a huge range of genres, and each of those songs are accompanied by a vivid and exciting cut scene. Just how much you enjoy the music on offer is of course conditional on how much you enjoy vocaloid voices, but there’s a surprising range on offer here. There’s some more soulful, reflective music, there’s some stuff where the characters are rocking out, and then some bubblegum pop tracks. Obviously the vocaloids are too limited to perform something like opera, but there’s more than enough variety in the game to fill hours of content.

Occasionally the activity in the background is so dynamic and energetic that it would distract me away from the rhythm game itself which, as you might expect, involved tapping buttons or swiping on the Vita’s screen in time with the music. When I was concentrating on the game itself, it was possible to take in what was going on in the “music video” in the background. Once a level has been completed you’re able to kick back and enjoy the music video by itself without the distraction of a game, and this has got to be the first music rhythm game where I’ve taken advantage of that opportunity. 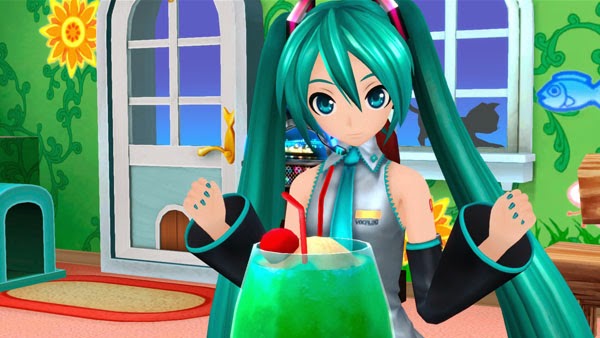 Doing well at a track earns points, which can be spent on the aforementioned costumes and presents for Miku and her friends. It’s a decent enough incentive to keep playing, even if there’s a lack of a sense of competition that usually helps games in the genre. With that said the greatest replay value within Project Diva f will be the video creation mode for people who get really hooked on the game and have plenty of patience.

Within this mode you’ll be able to create complete levels for Miku and friends to dance to. You’ll be able to create the setting, set the camera angles, pick the dance moves, and even pick the music; the game can read .mp3s off the memory card, so if you happen to have created your own vocaloid music, you will be literally able to put your work into the game. It’s just a pity (however understandable for copyright reasons) that you’re not able to then share these tracks. 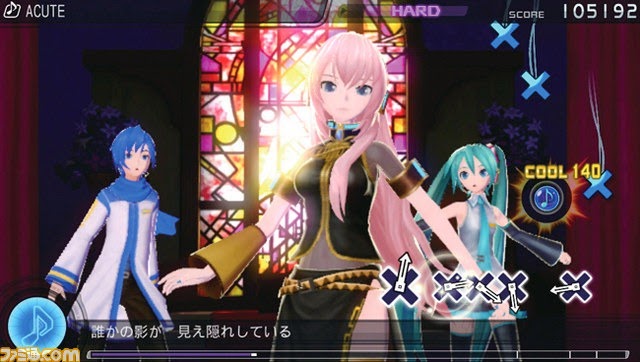 The core gameplay is nearly perfectly refined. Game developers are now very familiar with what makes for compelling rhythm music gameplay, and the team behind the Hatsune Miku games are one of the most experienced teams in this genre out there. Every level is balanced well with perfectly timed inputs for the flow of the music itself.

That gameplay, complimented with the excellent visual style and the charming music itself, makes for a heck of a compelling little game, that offers a load of content to boot. Portable games just don’t get better than this.

The big games of April 2014; Baseball, MMOs and a little something for the otaku