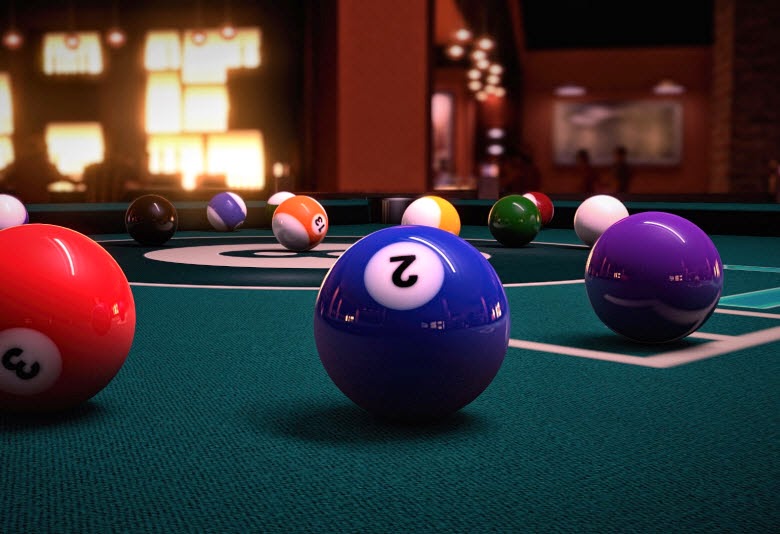 Pool is a very strategic game. It’s not just that there are the various angles and shots a person can play, but as with poker, it’s more important to consider your opponent than what is in front of you. If I do not think I can make a shot, do I then punt and try to leave my opponent with as difficult a shot as possible, or try and pocket the tough one? These are the types of decisions you have to make as Pure Pool does an excellent job of creating a virtual experience complete with a variety of challenges and social options.

Sometimes I think video games appeal to me because they allow me to be good at something I might not be in real life. Examples include pool, bowling, soccer and anything involving swimming (there has been a swimming sim before? – ed). I have always enjoyed pool, dating back to far too many evenings in college drinking beer and pretending that inebriation was the reason I was losing repeatedly, and not because I simply struggled with the game’s physics. I enjoyed it, but I was never particularly good at it. Thankfully with a controller in my hand, I found myself doing far better.

The thing about Pure Pool is the learning curve is somewhat akin to real life. That very first career match, against the easiest opponent, I lost twice right off of the bat. Just because I can use a controller to put perfect spin on a ball or use the guides to get an idea what direction the shot will go does not mean I have a good understanding of the strategy behind the game. Through multiple matches and repetition however, I found myself faring far better over time. Traditional games like 8 and 9 ball give you a decent career mode, but some of the additional modes (timed, taking/ gaining ‘lives’ and more) add some ‘arcade-like’ variety to the already entertaining career and online modes. 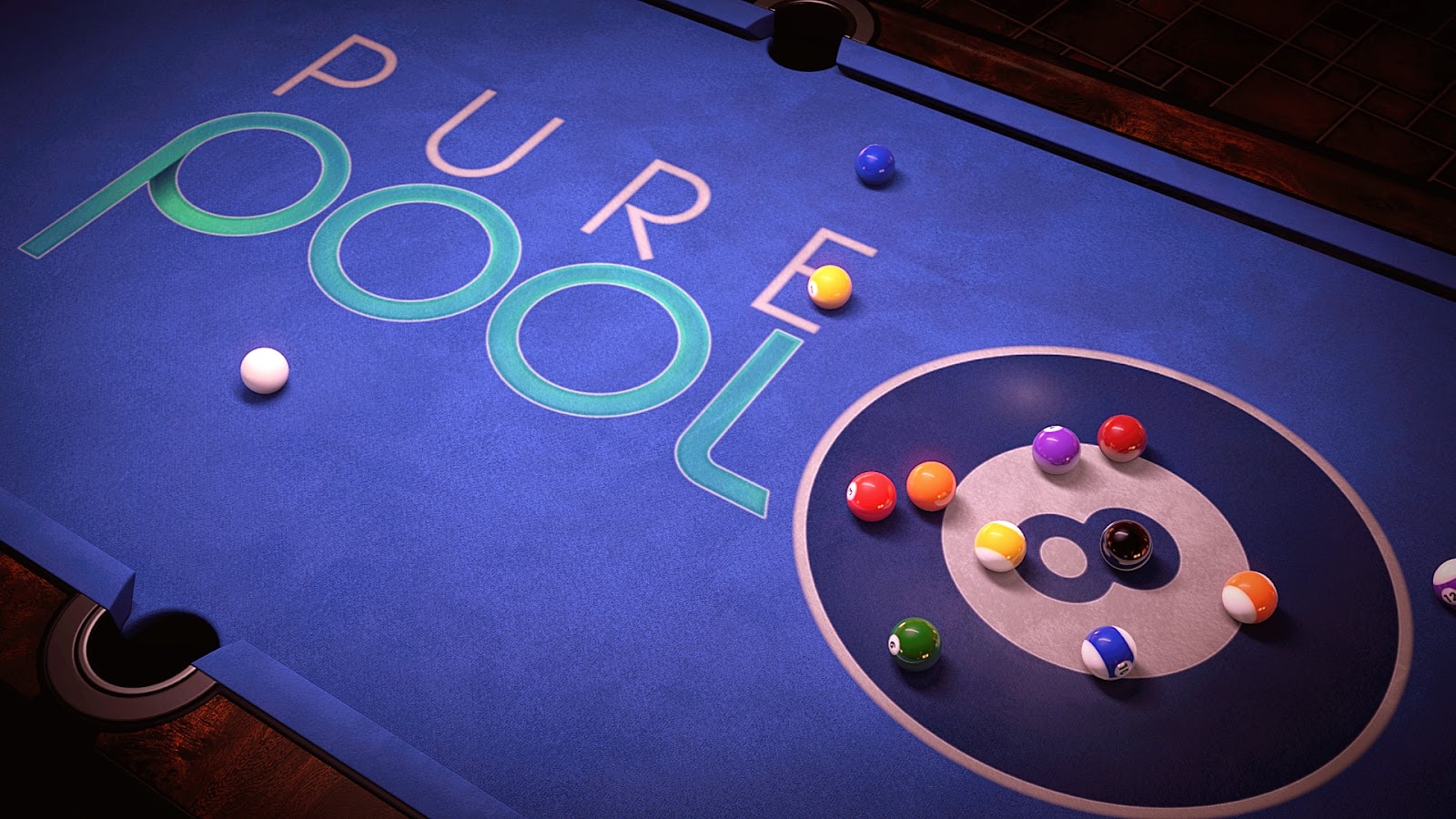 The online meanwhile is simple and effective. The game is gorgeous rendered, with the pool balls wonderfully detailed and angles accurately represented as the camera enforces a ‘behind the ball’ approach as opposed to what would no doubt be an easier-to-play but less authentic overhead view. The music is soft and subtle and the pool balls provide satisfying ‘clacking’ sounds on a good hit. The final shot is always greeted with a close-up slow-mo of the cue stick hitting the ball, a fine cloud of chalk dust powder floating into the air on contact that lends a cinematic conclusion to a well-played match. However, that is about it for the presentation. You do not see other player models playing the game or milling about the table, and other than a handful of different aesthetics such as where the games are being played or what kind of a table decoration your game is taking place on, there is not much visual variety. That means as gorgeous and “jazzy” as it looks, Pure Pool also is aesthetically sterile, and over time the sheen does wear thin.

That is just fine though, because Pure Pool knows that the focus is rightfully on the realistic game of billiards being played. Even the guides are handled intelligently. I recall spending entirely too many hours playing the online game of pool on Yahoo! games years ago. This was a top-down game with guidance line that left little to the imagination. Here there are guides as well, but they are interesting because they taper off after a distance. Easy shots are therefore easy, but long distance shots still require real skill, as there’s no real guidance to what will happen by the time the balls stop moving.

There is more to the game than just cranking away at the cue ball with all of your might. Gentle shots are the key to sinking the ball into corners. Hit it too hard and your shot could foul as the ball bounces right off of the table. Hit your target too hard, and your cue ball could bounce onwards and have unintended consequences (that first match I finally won happened because the AI sunk the 8 ball prematurely and lost the game). 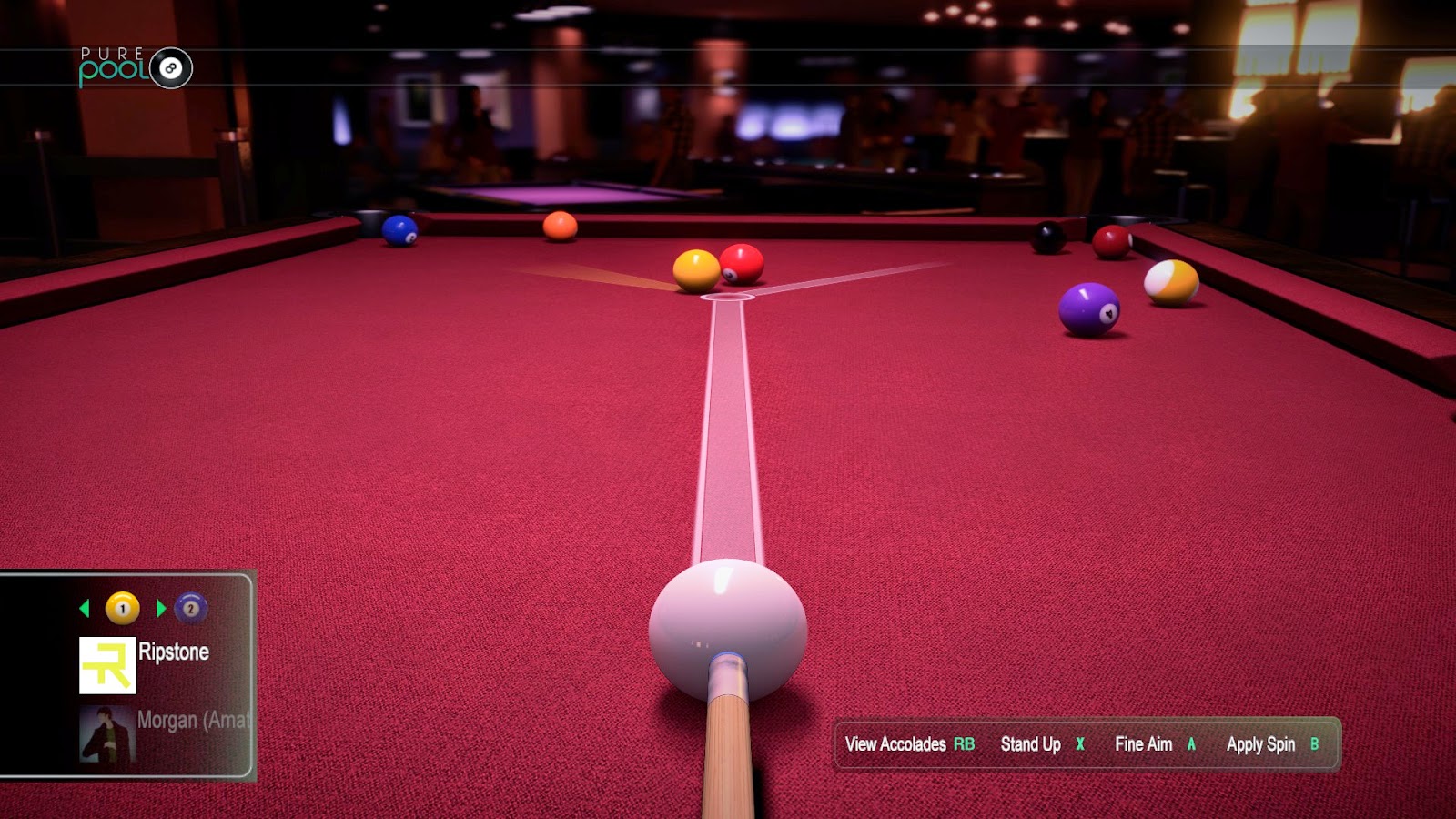 Throughout the gameplay experience accolades for all kinds of things pop up on the screen. These can range from knocking the cue ball off of the table to pulling off a particularly tricky bank shot or putting in four shots in a row. But beating the AI is reward enough. As the opponents become more experienced during the career mode, the less wiggle room you will have to make mistakes. I had an opponent in the championship game clear the table after my first miss. That can make it a challenge to advance, which is a good thing of course. If it were too easy then winning would provide very little satisfaction.

The one questionable mechanic however, is that progression through the career mode is dependent on getting stars. Stars indicate how well you do in the side games or if you complete objectives in your one-on-one matches (sometimes a star is just as easy as winning the match, other times they can be harder such as winning within a certain amount of time or while your opponent still has three balls left on the table). Each of these sessions carries the potential for three stars and a certain number of stars is needed to move onto the next rank. It’s a good idea, but some of the requirements to get stars are incredibly challenging, and often you need to get most of the previous stars to be able to move on.

One of the more interesting features is the DNA option, which, similarly to the Driveatar found in the newest Forza titles, attempts to play the game like you do. This creates an avatar of roughly your own skill for others to play against, which with the online modes provides a fairly sturdy backbone for the multiplayer experience. As much as I like the levelling system for progression in the career mode, winning an online match is far and away the most satisfying aspect of the game, so it’s good that VooFoo made that mode so robust.

Pure Pool does not have a huge number of bells and whistles. However, it does provide a gorgeous, fundamentally sound game of pool with enough modes and options to keep fans of pool busy for quite some time.