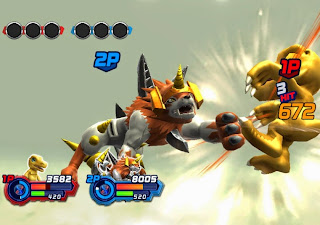 Digimon has been around for ages, but it’s never quite hit the heights of its peers. My kids got into it for a while (though it never took precedence over Yu-Gi-Oh! or Pokemon), but none of the family have really been concerned with the numerous game adaptations over the years. Digimon All-Star Rumble has curious timing, given it is a stage-based brawler that has appeared just before Super Smash Bros. lands on the Wii U. I wouldn’t have thought that was a good idea, and while you can make comparisons between the two, Digimon All-Star Rumble is an average overall that does itself no favours being released so close to a game so similar in concept of that quality.

Now, of course this is aimed at a younger audience than PlayStation All-Stars. The characters are cute dinosaur-like creatures, living in a world that has become entirely too peaceful (the fact that this is apparently a bad thing is questionable in a game for kids, mind). Some of the Digimon find themselves missing the thrill of battle and their lack of reason to Digivolve – a temporary power-up that transforms them into larger, more powerful versions of themselves. Out of this boredom is born an idea: to have a tournament where the Digimon can pit their skills against one another. 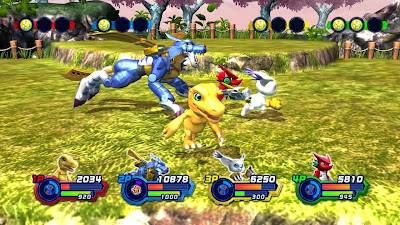 This is the crux of the story mode, which never really gets much deeper than this. Your chosen Digimon (you can pick from one of four to start) encounters enemies as he navigates fairly simple levels that involve some basic platforming, weak enemies and light puzzle solving (such as throwing a switch to open up a gate).

There are barrels, boxes and chests to be smashed open while wandering the levels, usually rewarding the player with either restored special power attacks, coins for purchases or items like Digimon cards. The cards are one of the cooler ideas and it could have been more. They’re common enough for anime-themed games, and act as one shot ‘perks’ you can fire off in a battle to do things like reduce damage taken for thirty seconds by half or draining SP from your opponent.

When meeting a boss at the end of the level, the game shifts to its more Smash Bros-inspired action. Here your Digimon will square off with a boss character and if you beat him or her, they unlock and become a playable character later. There are more than half a dozen levels like this, encouraging the player to perform some light exploration before culminating in increasingly difficult boss battles. The early levels were a piece of cake, while the later boss matches struggle but typically fail to find a proper balance between ‘challenging’ and ‘cheap’. The difficulty spike seems like it would have the potential to turn off the younger gamers that this title feels made for. 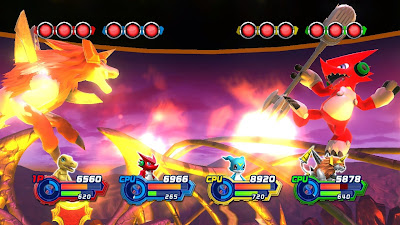 Each of the Digimon is capable of building up a special meter that allows them to become super-sized and more powerful. It’s great in theory, but it leads to a rather awkward situation when one character is powered up and the other(s) is not. Basically the underpowered character does everything in their power to scramble away until their opponent’s buff wears off, leading to a game of cat and mouse that is amusing the first few times, but quickly wears thin.

Another nice feature are the different objectives. Instead of just knocking someone off of the screen like in Smash Bros, there are different types of maps with requisites to be met for victory. These can range from how many KO’s a person takes to how much overall damage is done and more – often tied to a time limit of some sort. It is neat that the developer came up with these different themes, but disappointing that really in the end, they all just boil down to hitting your opponent more often than  you are hit. I realize that is the point of games like this, but surely there are more creative approaches to victory in a fighting game.

The combat is easy to pick up, but quite simple and there is not as much satisfaction from learning the moves in the limited move list as more advanced fighting games. A ranged attack button chews up SP while a light and heavy melee attack can chain multiple hits together and culminate in some sort of a semi-flashy finishing move like a flaming uppercut. It is easy to get locked into these combo animations, and due to the 3D levels it is also easy to wind up completely missing your opponent. The end result is a string of punches thrown at nothing, and that looks as silly as it sounds. 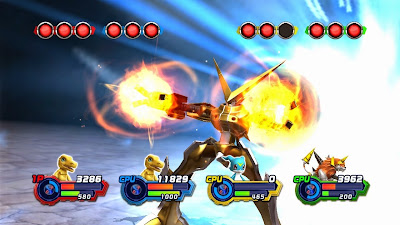 Power-ups help to liven things up, providing some randomness to the battles. Sometimes the power-ups restore health, other times they surround the character with a whirling tornado and more. Unfortunately the variety is as lacking here as in other parts of the game. A tiny roster of characters and levels equal a budget game in the truest sense.

Probably the most frustrating omission is the lack of any sort of online mode. It’s hard to get this kind of game right in online play – Nintendo itself still hasn’t achieved it, but a fighting game that doesn’t at least try to go online is a dud from the outset.

There are some decent ideas in Digimon All-Star Rumble experience, but it clearly lacks for budget. Released at this time of year, and so close to Super Smash Bros so that it will be directly compared to it, there’s no chance of Digimon appealing to any but the most diehard fan.