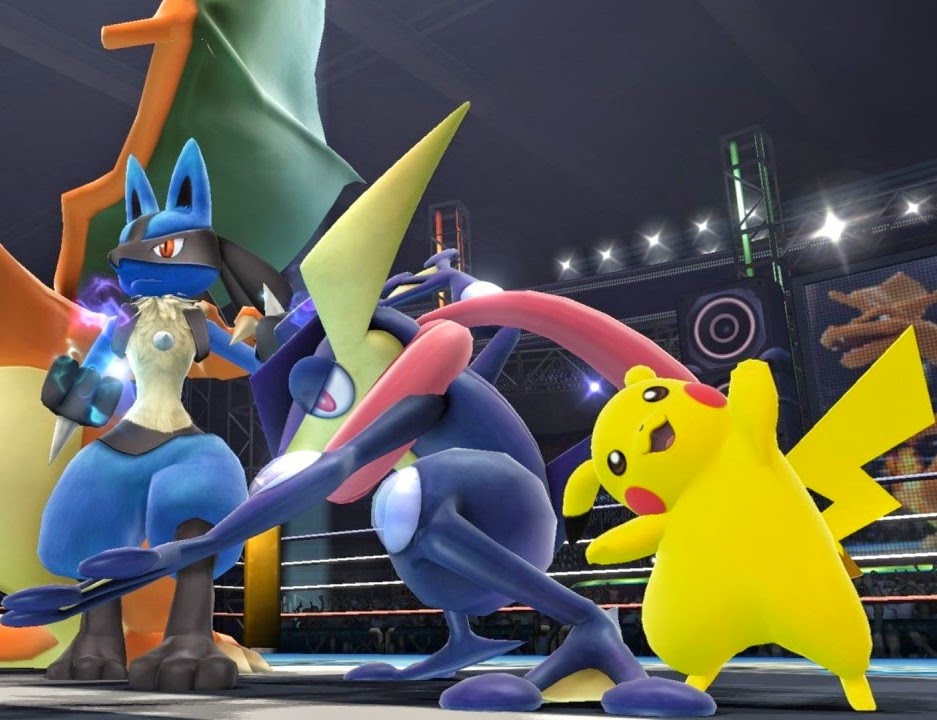 I’ve been playing the Smash Bros. series since its very first release way back on the Nintendo 64. You might think I’m old for saying this (actually, I guess I am getting older…) But nonetheless, some of my fondest gaming memories ever have come from this series.

There was that time that a group of friends, at about 1AM (after playing solidily since the early evening, mind you), decided in a drunken stupor that it would be fun to set the in-gamer timer to the maximum (90 minutes, from memory) and play a “marathon,” that left us physically exhausted. That was Smash Bros. Melee on the Gamecube. Then I will never forget the cheer of hooray when the Jigglypuffer in our group got his first KO on the N64 Smash Bros. (he was well past 100 times KOed himself at that point). Heck, to this day people dread when I take Pikachu in Smash Bros. Brawl. Not because I’m necessarily good with him (I’m really not), but simply because spamming his taunt buttons is perhaps the greatest in-game troll in the history of in-game trolling.

With my history with Smash Bros. as a context, I’ve got to say I’m just a little disappointed with Super Smash Bros. on the Nintendo 3DS. Now, don’t get me wrong, I think in terms of how it actually plays, Super Smash Bros. is Nintendo’s finest work yet. The positive initial impressions I had on how the demo has played have continued to pan out now that I’ve got access to all the characters, stages, and play modes. This is the tightest and most balanced Smash game yet. And Nintendo has managed to improve the game’s credentials as a serious fighting game without compromising its sense of party fun, too, which is a spectacular effort in thematic balancing.

My problem with the 3DS version of this game is its hardware. I’m still using an original model 3DS console, which means that characters look so tiny on the screen (especially when zoomed out) that they lose all sense of character. Clever design has meant that it’s always easy to follow the characters on the screen – I could count the times I suffered a KO because I lost my character on one hand – but remembering that Smash Bros. is meant to be a fanservice game at core, having characters that are too small to make out their distinctive personalities means that we lose much of the character of the game immediately.

This is a pity, because in addition to the returning cast of characters, the new ones to pop up in the game all succeed at bringing something new to the party, and have movesets that, when zoomed in close enough to see what is going on, are aesthetically appropriate for the characters. Mega Man, for instance, is a ranged attacker, and for the first time in Smash Bros, he’s a character that is quite hopeless in close combat. He’s fun to play, but people that want to make use of him will need to retrain themselves. Little Mac’s fists are truly intimidating, but get him in the air and it’s game over. I’ve got to admit my new favourite is, however, Pac-Man. Finally being able to chow down on something other than ghosts and drugs feels good, and because Pac-Man was only ever a yellow ball, he preserves his personality far better than the other characters when the camera pulls back.

Smash Bros. already offered a wide range of characters to suit every play style and every player from beginner through to advanced, and the new characters enhance things even further. Veterans of previous games will find value in trying all the characters again, because they do typically play differently and have been clearly tweaked with competitive play in mind. I’m not brave enough to try and go “pro” with this game, but I suspect the serious players will find the game better balanced overall, with fewer dud characters in the past, and I never really had the impression that any one character was “overpowered”, either. Certainly in the online multiplayer I didn’t encounter the same character being used over and over again, which is generally a good sign for a fighting game’s balance. 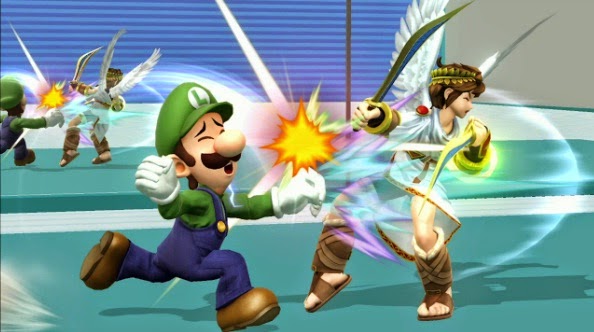 The multiplayer brings up my second issue with the game as related to the 3DS hardware; outside of Japan handheld game consoles are seen as solitary devices. They’re the consoles you play in bed, or take with you in your suitcase, or relax with in front of a lounge while the better half is watching something you have no interest in. What people outside of Japan don’t do is generally meet up with one another for local multiplayer sessions on their handheld games. And yet, Smash Bros. is – and will always be – an experience best suited to local multiplayer. Sitting together with friends in front of a TV and knocking controllers out of each other’s hands for a momentary advantage is the heritage of Smash Bros. and was the reason that people have loved each and every edition of this series, despite the only other game to attempt online multiplayer, Smash Bros. Brawl on the Wii, being irredeemably broken when playing online.

Even if you’re able to get friends together for a local multiplayer game, huddling around individual screens simply doesn’t have the same level of socialisation as kicking back in front of a shared big screen TV, and so again Super Smash Bros. is a lacking experience on the 3DS. Nintendo has attempted to compensate for this through an expanded single player game and better netcode for a reliable online multiplayer environment. The former does work; the Smash Run single player mode is a brilliant addition to the base game. In this version of the game players start out in a large open world and need to defeat enemies pulled from all of Nintendo’s franchises (Goombas, Deku Plants, and so on), and by doing so they slowly build up statistics and acquire items that they can then use in a short final round with other players or CPU opponents to determine the victor. The idea of having an opportunity to build up stats to have an edge in the “real combat,” adds a layer of strategy and intensity to the proceedings, as you’ll never be quite sure how your opponents are going to go about their own ‘pre-show levelling.’ The stakes are higher when you’ve just spend five minutes preparing yourself for the main event. No one likes wasting time.

The single player game also includes more standard modes and some minigames. These are decent diversions, and even necessary to unlock extra characters, but they aren’t lasting in themselves. If there’s anything that’s going to have you coming back as a solo-player game, it’s that Smash Run mode.

Online multiplayer, however, is only somewhat improved over the Brawl version of the game. For the more competitive multiplayer, which turns items off and makes battles a pure skill-based affair, it mostly works. I say “mostly” because any slowdown whatsoever for a game like this is unacceptable, and there was always moments of lag in this mode, but not so much to render it completely unplayable. Turn the items on for the “fun” version of the game, however, and you can kiss goodbye any desire you might have for precise gameplay. The servers fail to keep up completely.

I say this after playing a few dozen matches and not once having a completely seamless experience in either online play mode. I’m not sure if it’s a load issue on Nintendo’s part based on raw demand with the game already selling somewhere close to three millions units, my connection (unlikely, since I play other games, including Mario Kart, just fine online even on launch day), or simply netcode is not quite at the point where it can handle four fighters rather than the traditional two for fighting games. You’ll still be able to play Smash Bros. online, and enjoy the game (which is, as I said, a step above Brawl), but it’s nowhere near seamless and, again, not a patch on the local multiplayer experience of previous iterations of the franchise.

In terms of raw content there is an obscene amount to do in Smash Bros., from unlocking all of the trophies, earning the in-game achievements, and unlocking additional characters and stages (of course). Getting to the point where everything has been unlocked should take most people weeks of solid play, though the inconvenient multiplayer modes means that for the first time in its history, Super Smash Bros. on the 3DS has a finite lifespan. As someone who makes a conservative guess of over 1000 hours time spent in each of the previous games (and only a fraction of that being in the single player modes), I simply can’t see myself getting close to that with this version of this game. Once I’m back to the point where the highest AI difficulty ceases to prove challenging, I can’t see myself returning to it any longer. 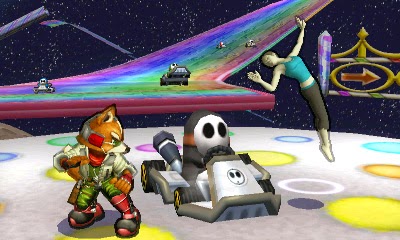 But then the Wii U version will be released, and perhaps this was Nintendo’s intention all along when it made the seemingly strange decision to release the Wii U game a couple of months after the 3DS version. The company has succeeded  in providing a true Smash Bros. game on the 3DS, but has also ensured that Smash Bros. fans are reminded that it’s the local multiplayer experience that has driven this franchise for so long. An lo and behold, that Wii U version will have that critical local multiplayer component executed to perfection. Perhaps Nintendo wanted to provide what amounts to a demo for the “true” Wii U version of Smash Bros. on the 3DS and encourage people to buy that struggling console. Perhaps it will even work, and if that’s the case, hats off to a brilliant move by Nintendo. I can all-but guarantee that the Wii U version of Super Smash Bros. will be game of the year based on the raw quality of how the 3DS version plays and the assumed value of the local multiplayer on the big screen. But if we were too look at 3DS version in isolation, it does miss the point of why people play Smash Bros. in the first place.