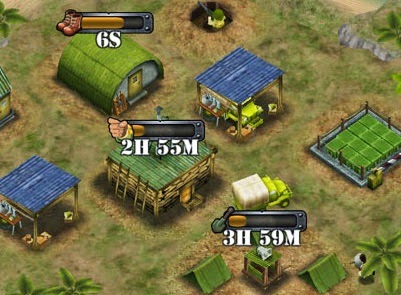 Battle Islands is the kind of game that it would have been nice to have never seen on the PlayStation 4. Doing almost nothing different to the likes of Clash of Clans, the game’s all about waiting, waiting, and then spending money so you don’t need to wait so much.

Billing itself as a “strategy” game, there’s almost no strategy involved in Battle Islands. You’ll select a building to construct from a menu, and then wait for a period of time (which can extend into into the hours) for that building to be constructed. You can only work on so many buildings at once too, because you need “engineers” to work on them, and they come in short supply. But you can use the in-game premium currency that costs real money to build more, of course. Then you’ll build units (waiting a period of time for each, of course) and go to war, either against enemy AI or real players. Those wars involve you trying to take down their bases, but involves nothing more than setting your units down on an opponent’s island and watching them run around the island. You then get to use the loot earned from raids to build more units and upgrade buildings (which takes time, of course).

On a mobile device, this gameplay loop is used far too often, but it does fit the platform and so is far less offensive. You’re able to log in and quickly spend your cash and do a raid on the morning commute or five minute downtime. It doesn’t matter that there are so many extended periods of waiting in these games, because you’re likely to just put the mobile phone down and get back to the work you probably were meant to be doing. So it’s okay that after five minutes or so play you’ve exhausted everything you can for the next six hours. But on the PlayStation 4 you’re looking for longer play sessions, and running out of things to do after five minutes is not even close to good enough.

To give you an idea of what the typical play session consists of, I recored this video of an entire session’s play. Now, this is quite early on in the game, but I’ve since spent an entire weekend logging in whenever the countdowns let me, and my play sessions aren’t getting any longer:

On a technical level the game plays even worse on PlayStation than on mobile platforms. On, say, an iPad, you’re able to directly interact with the game (i.e. you tap on where you want to build something), but the PlayStation controller puts one additional, clunky, step between yourself and interacting with the environment. Because it’s not an action game it doesn’t matter so much that the cursor is clunky, but it’s further proof that consoles are not the right platform for this kind of game.

Battle Islands is also let down by a complete lack of charm. Free-to-play games that are fun to play are those that are visually vibrant and dynamic, and those that offer enough humour to give players something to connect with. But Battle Islands offers nothing of the sort. The aesthetic is a mess of bland, generic military colours, and the buildings lack personality. I had thought at first that the reason could be because by default the camera is so zoomed out that it’s hard to tell one unit from another. But, no, I zoomed in and it was just as bland and boring. Only now it also gave me a headache because now the screen went crazy with the scrolling on the slightest tap of the PlayStation analogue stick.

There are some free-to-play games that work on console. The PlayStation 4 has War Thunder and Warframe, for example, and they’re perfectly workable games. The Xbox 360 saw a successful experiment at bringing World of Tanks, a free-to-play game genuinely worth supporting with microtranastion payments. But taking a mobile free-to-play game like this and copying it wholesale to the console was a ridiculous error in judgement by the developer. Someone in the team should really have understood better the difference in what works for console compared to mobile, and understood that this kind of game just won’t sit well with the kinds of people that like playing console games.

The games of November: To the backlog pile with you!