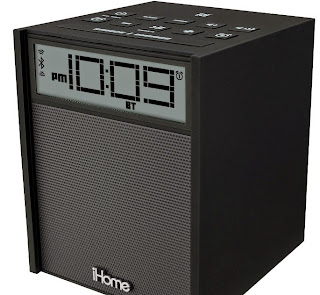 The iHome iBN 180 seems to be trying to be a Swiss army knife. It has a lot of utility and a good number of options, but like a bard in Dungeons & Dragons, it does a lot of things adequately but few of them particularly well. The end result is a device that is underwhelming when compared to its price point, but still provides enough convenience that some might be willing to overlook its shortcomings.

Most of the time, I appreciate iHome’s simple approach to design. When I am using a portable speaker on a windowsill or next to a pool, a rugged, squarish design is appreciated, especially since these devices are usually free of cords and running off of batteries. However, the iBN180 is boxy in design, with a speaker and a small but still readable screen on the front, a variety of buttons on the top and a rubberised finish that are nice and compact, but are not aesthetically pleasing. The display can be hard to read from angles, though straight-on it works well.

All those buttons at the top help with a range of different functions. The iBN180 has a built-in FM radio that can have up to six presets. There are two different alarm times that can be set (these are strictly times however. There is no awareness or smart calendar built in, so it does not differentiate between days of the week or anything like that). One of the best programmable features is the ability to make the radio playback grow quiet over time (for those who like to listen to music at night) and ramp up slowly with the morning alarm (for those who prefer not to have a heart attack at 5:30am).

Probably the best design choice made is that the charging connection on the unit is a generic USB input. This means any device that hooks up via USB can be charged this way. I was glad to see that it was not specific to i-devices. It also accepts audio input a couple of different ways. It has Bluetooth for supported devices but also a 3.5mm axillary input. So not only is the charger flexible, but so are the different input devices that can be used. 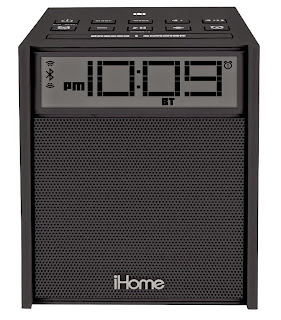 The buttons on top do not fair quite as well. They all work fine, but because they are on top, you have to be sitting right over it to see what you are doing. With the small, flat buttons built into the smallest of the already compact design’s surfaces, groggy button gropers are bound to click the wrong things early on until they get used to the system and the button layout.

This brings us to the final aspect of this jack-of-all-trades device. This is an alarm clock. Those hoping to use it as a high quality speaker are bound to be disappointed. Bluetooth almost never sounds quite as good as the plugged-in variety of sound devices, but even then the speaker on the iBN180 is weak. This is not a stereo substitute despite the various hookups. The volume levels max out rather low, and there is no bass to speak of here. It is a shame, because so many other small iHome devices seem to deliver big sound but the iBN180 underwhelms compared to those. It is not bad audio, it just is not great audio either.

If you are looking for an alarm clock with some flexibility, the iHome iBN180 does a nice job of providing options. The design of the unit itself was average however, as was the actual audio quality. Outside of serving as a clock or a means of waking up, it does not deliver enough audio punch to fully justify its price tag.

This clock can be found here