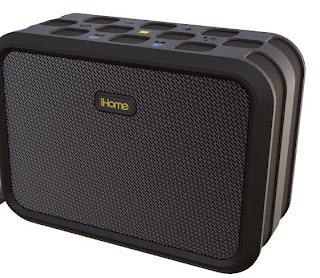 There are more than a few running jokes about gamers and film buffs never leaving the house, but the iHome iBN6 is an interesting option for  those who do want to take their in-home entertainment somewhere else.

It’s a speaker that is very durable while remaining reasonably small and light and offering excellent sound quality. There are plenty of small features make this device handy for music or audio books on the go.

The primary concern with almost any speaker is how does it sound? In this case the iBN6 provides a surprisingly good range of low and high audio, with adequate if unspectacular bass that is clear at low levels, but does not distort at higher volumes either. This is a stereo speaker, though perhaps not as rich as some wired setups, it still handles a variety of music admirably. At its loudest, the iBN6 can belt out audio that can be heard over several kids playing in and around a swimming pool. Summer bliss, in other words. In fact, this is probably one of the unit’s best situation uses – It’s good for a party or gathering where it might be subjected to some tough treatment, such as some water. 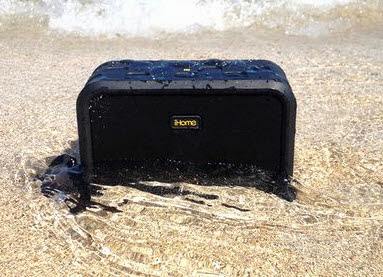 As the name would imply, the iBN6 is designed to be completely waterproof. I would not go dunking it in the bathtub with me, but it held up just fine to splashes, light rain and setting out overnight to collect dew (it said waterproof, so I wanted to test to see if you could use it as a survival tool in a desert…). With an IPX7 rating, this device should survive immersion of up to one metre for up to thirty minutes. The overall build design reflects that rugged approach as well. At about one and a half pounds and roughly the size of an old lunch box, the rubberised edges and rounded corners allow the iBN6 to take a pretty decent beating out of the water as well.

Despite the simple exterior design, there are quite a few features tucked into the device that might not be immediately noticeable. For one, it has an auxiliary 3.5mm jack for hooking up devices that do not support Bluetooth (such as my youngest daughter’s MP3 player). Of course, tethering a device to a speaker that is meant to stay close to water does not ensure that connected device’s safety. So it’s just as well that wireless connections work too, so that you can keep your device safely out of the way. The battery ran for over twelve hours with the settings turned up all of the way (I had it locked up in another room and let it go all night and it was still playing in the morning when I got up for work). 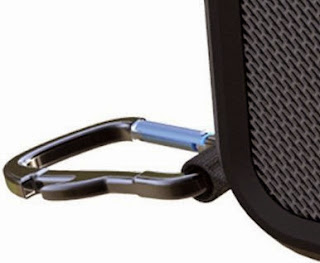 There are some other notable features with the overall design. For one, there is a USB port that can be used for charging a device. I probably would not rest my iPad on top of it at a pool party, but I can see doing so if your battery is flagging and you want to use the device at a park or something like that. Given how long the iBN6 battery lasts, it has juice to share should you need it. The buttons are inlaid into the  rubbery top of the case. They all press inward for control, with nothing protruding to get caught on or broken if the unit is in fact dropped. The additional clip near the corner of the device is also quite sturdy and can be used for attaching it to a backpack or opening a bottle of beer – which, let’s face it, only enhances its value at parties.

iHome has proven with this device that it can think outside of the box with its audio equipment. Perfectly usable at home when hooked up to an iPod or even used as a computer or laptop speaker, the iBN6’s potential is somewhat wasted in that scenario however. It is surprisingly lightweight with rugged design that makes it perfect for audio on the go, with a combination of options that allow it to work with a variety of devices in both a wired and wireless capacity. The iHome iBN6 achieves everything it sets out to, which is basically the point, right?

This speaker can be purchased here