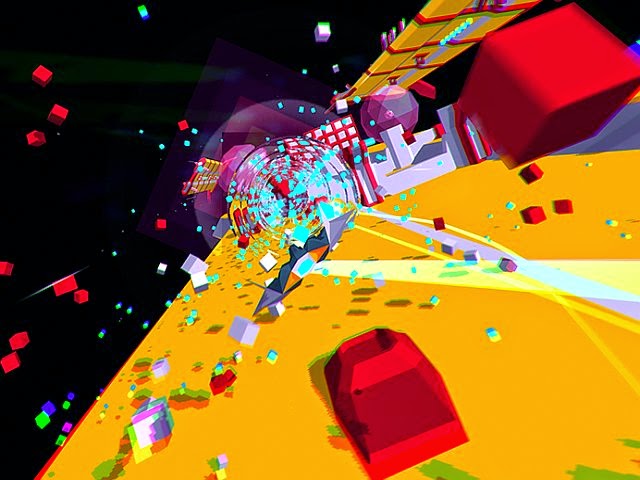 Don’t let its name fool you. Futuridium may be set in the future but it has everything to do with the past. It’s a retrograde past of punishing difficulty levels, life-saving credits and pew-pew sound effects. Its aesthetic is a mash up of neon magentas and cyans, a ZX Spectrum’s psychedelic disco of colour which plays against textureless, monolithic polygons, roughly hewn from the hayday of arcade glory. If you’re into retro (authentic classic retro) then you’ll love Futuridium EP Deluxe. But look deeper and you’ll see that, in the marketing of the game as an arcade shooter, a set of false expectations is created that undermine the potential enjoyment of the game for all but the most dedicated of purists. Very few players will find themselves part of the niche that Futuridium demands for its enjoyment.

Futuridium is so rooted in the mastery of guiding objects in motion that it has more in common with 2D dodge platformers like Frogger than an arcade shooter. Both games are about precise alignment and timing, but developers MixedBag’s styling of the game as an arcade classic sits at odds to its greater substance as a path finding platformer. That’s not to say that the game is style over substance, for at its core the retro look is congruent with the simplified mechanics. Put simply, the game’s central mechanic is about avoidance rather than attack. It has none of the feckless big gun abandon of an old school arcade shooter. There is no rewarding accruement of power ups. Neither is there the creative flair of combat that comes with obliterating waves of alien enemies with diverse yet predictable attack patterns. There is no ‘flow’ to this game (the holy grail of arcade abandon), that heightened sense of autonomous bliss that anyone that has lost themselves to the rhythm of an arcade battle can understand. There is only frustration. 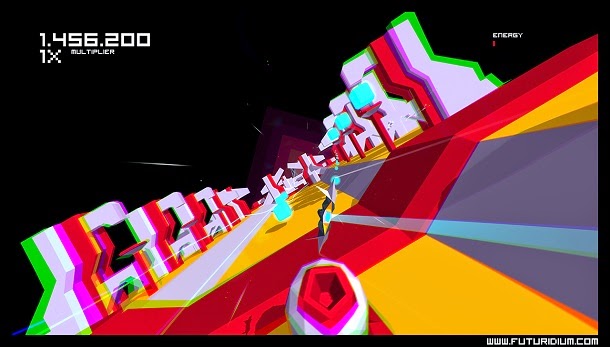 The aim in Futuridium is to destroy cubes whilst avoiding the battlements and structures of huge ships. There’s a story in there somewhere, something about being trapped in a time warp on the eve of great battle but it’s rarely referred to and inconsequential to the game. Destroying all of the blue cubes reveals a white master cube, a core, which upon being hit will end the level. Destroying cubes without dying raises the multiplier whilst destroying cubes in sequence will raise the chain multiplier. It’s a standard, reliable arcade scoring system: the longer the chain, the higher the score. There are added challenges such as ‘Deathcheater’ , earned if you complete the level without dying; ‘Lightspeed’, for completing the level within a set time; and ‘Chainmaster’ for beating the level by chaining all the cubes together. On top of this, your energy is constantly depleting. Shooting cubes refills your fuel tank, and once you’ve run out of fuel, you’ll require an extra “credit” to play on.

Your ability to move in Futuridium can sometimes feel slow and two dimensional, if it were not for the addition of a simple trick that allows you to reverse your ship 180 degrees along a 3rd dimension. This enables you to avoid obstacles, line up perfect shots and generally stay alive for that much longer, but ultimately it is, like Futuridium itself, not half as fancy as it sounds. Energy trails that are supposed to guide you by indicating where you’ve come from can quickly disorientate and become lost in a growing, frenzied network of incalculable paths. It’s virtually impossible to line yourself up using this method, and so you flip back and forth, incrementally nudging your ship into the correct position through trial and error. Sometimes, this can feel like you are skilfully manoeuvring yourself using a cool mechanic, but get too close to the large monochrome faces of the enemies’ polygons and you lose all sense of speed, direction and skill. 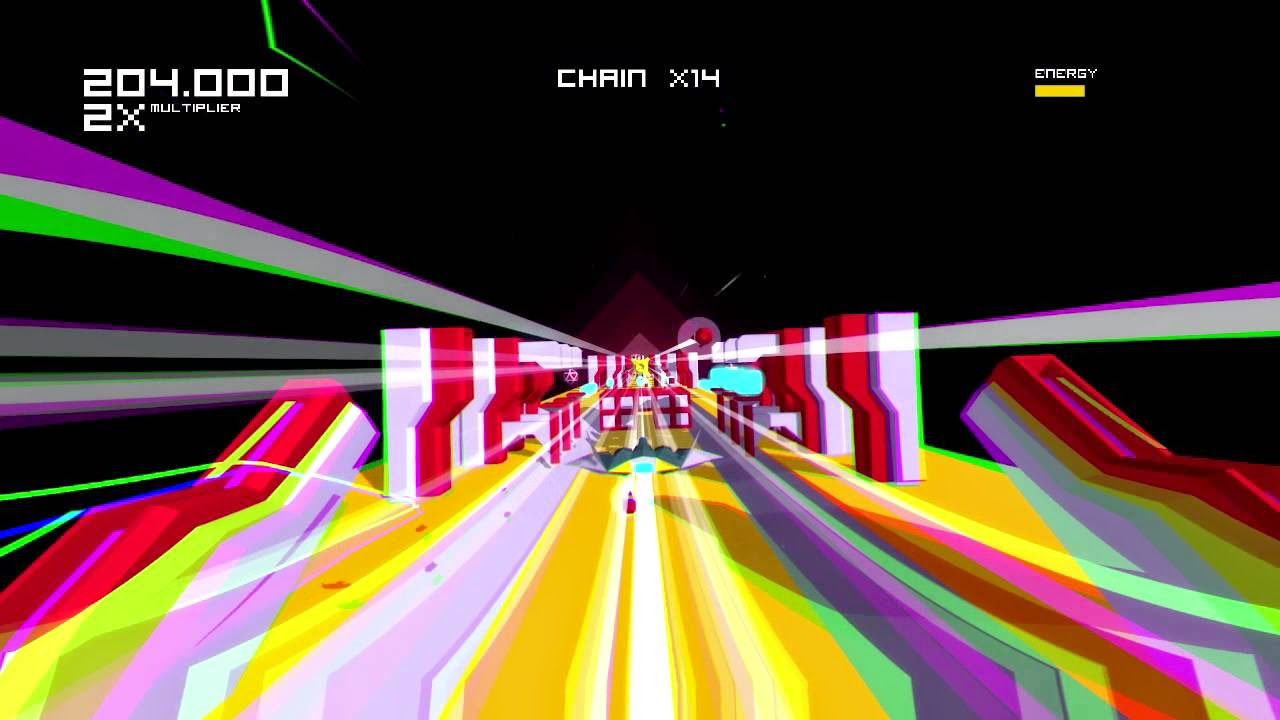 As the polygons curve obtusely off the edges of the screen, their surfaces become layered with translucence. They seem to shift over one another and create the distracting effect of a 3D image, as viewed without 3D glasses. Even clocking in at 60fps, this ‘unrealised’ 3D layering effect can cause player disorientation and make proper alignment with the ‘terrain’ difficult. This is not the only design choice to cause a break from immersion. There is no dynamic horizon to objectively measure your distance or speed, no dimensional grid to frame your steering, and no stand out distinction between the colour of your ship and obstacles. The jet trail also obscures your view when you descend.

The 50 levels are split into five parts of 10 increasingly more complex stages. This is fitted around a maddening checkpoint system which only saves your progress at every 10th level. If you run out of credits at Level 29 for instance, you start back at Level 21 and have to replay the same levels ad infinitum until you get it right. The game earnestly throws a handful of skins and credits your way every now and again, but it never commits to sustaining your interest. The more you play, the more credits you’ll ultimately accrue but aside from this the game asks you to play for nothing more than the end itself (and without filling in the middle bit with mechanics that make it exciting enough to endure). 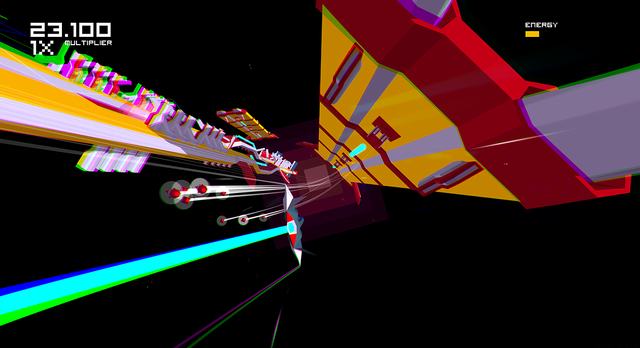 Futuridium may seem at first bite to taste like the meat of an arcade game of old, but there’s no addictive hook to the gameplay found within. Futuridium EP Deluxe also introduces new levels, and gameplay modes (single level, classic etc) over the original Futuridium and includes Flappyridium, an even more impossible game mode (unlocked after destroying 5000 cubes) which turns the action into a 2D side-scroller. The energetically metered ‘digital-dance’ soundtrack sits comfortably with the game’s paired down retro feel, but seems to anticipate a surge of energetic gameplay that ultimately remains elusive.

This is not a game for casual players, neither is it for those with a love of the arcade shooter genre. This is a game for retro purists or for those who wear their triumphs over insane difficulty levels like virtual army epaulettes across their gamer tags. Futuridium is a game for those who can invest in the grind of simply ‘getting the job done’. Taken on those terms, Futuridium becomes a challenge to be completed, retro looking enough to be in vogue, yet with mechanics that inhibit a broader mainstream appeal. Once you’ve sated your curiosity on its aesthetic retro nostalgia, it quickly feels like you’re playing Galaga at light speed ….on your PS4. Whether or not you invested in a PS4 to be able to play Galaga is something owners of Futuridium will have to come to terms with.