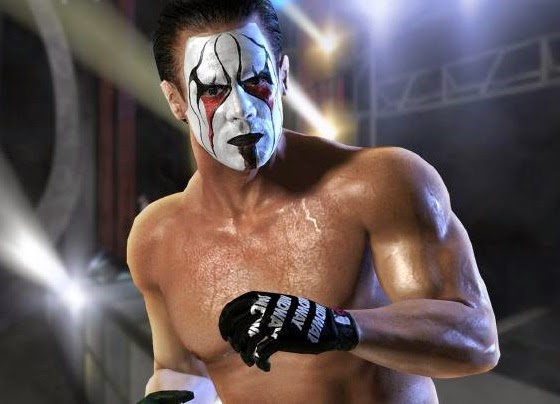 Wrestling has been a huge part of my life over the past 20 or so years. I’ve witnessed the highs of Hulkamania (through VHS tapes from my local video store), Stone Cold and The Rock rising from nothingness, and The Undertaker winning 21 Wrestlemanias in a row before finally getting defeated at the hands of Brock Lesnar. So to say that WWE2K15, now being handled by the lovely folks at Visual Concepts (with the assistance of previous WWE game developers, Yukes), was high on my ‘to play’ list is an understatement.

As soon as I had controller in hand, it was immediately apparent what Visual Concepts have added to the franchise, without compromising too much of what Yukes had built on over the years. While I was only able to play as either John Cena, Randy Orton, Goldust or Cesaro, the amount of effort into the detail of each wrestler is staggering. Each entrance has been beautifully crafted to be almost identical to what you see on television. If I wasn’t looking at it up close, it would look like it was ripped straight off an episode of Raw. 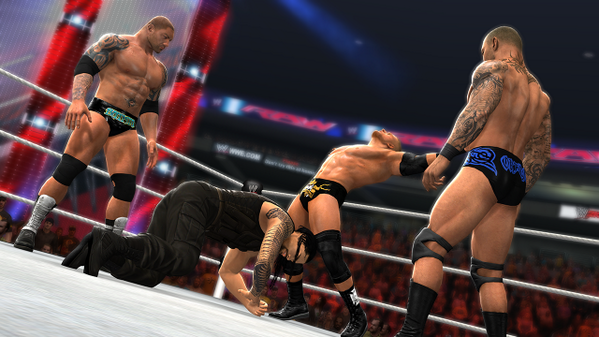 Once I managed to collect my jaw from the floor, I was met with an entirely new way to wrestle my match. No longer could I walk up to an opponent and deliver 18 powerbombs from the beginning of the match. The game forces you to enter a collar and elbow tie-up for the first few grapples, with a minigame of rock-paper-scissors providing which wrestler won in which hold. Once the wrestler has won a hold, it becomes a race to use the thumb stick to search for a sweet spot in a circle for each wrestler in the HUD. If the wrestler in the advantaged position wins, they then continue the chain, eventually leading up to the first major move in the match. Meanwhile, if the wrestler in the disadvantaged position wins, they win the position of power, and the minigame continues. Additional moves include hitting or twisting your opponent with square or cross to put them off the sweet spot. Anyone who watches wrestling knows that the majority of matches are paced this way from the start, so it’s good to finally see some acknowledgement of how matches actually play out finally being translated into video game form.

Winning the collar-elbow tie up minigame puts that wrestler in a better position to build up their first signature or finishing move. Once the match enters this phase, what was familiar in previous Yukes’ titles comes back to the fore, there are on screen indicators to show how to reverse moves (also letting you know if you were too fast or slow with hitting those buttons). There are also the signature and finishing moves that have always been a major part of wrestling games. The OMG moments are back again from WWE2K14, though I was only able to perform one with Cesaro, and it was a top-rope European Uppercut. 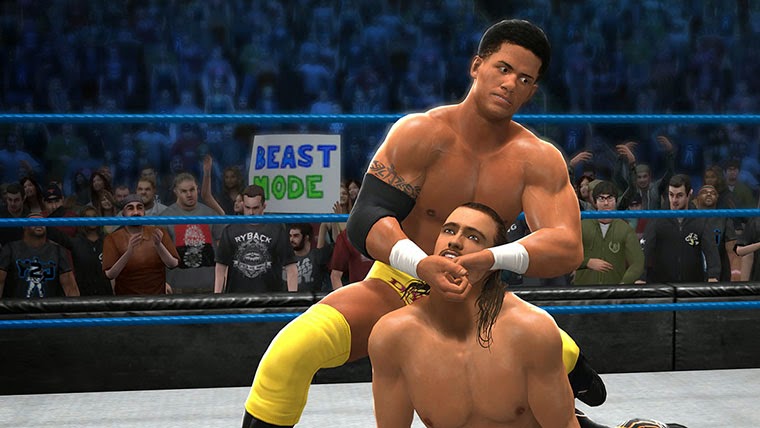 Speaking of moves, they are a lot more fluid in WWE2K15. No longer can John Cena perform an Attitude Adjustment in the corner of the ring where the other wrestler would most certainly die (or, in the case of previous titles, magically slide across the ring). Even if the opponent is in a bad position for the move, each wrestler drags them to the appropriate spot in the ring before performing the move. We see wrestlers doing this on TV and Pay Per View all the time, and it’s yet another example of how much more authentic this game is to the “sport”.

There were a number of stats displayed in each corner for each wrestler, but I wasn’t able to figure most of them out, and whoever was manning the station wasn’t to be found. One stat that was made obvious however was the stamina bar. Different wrestlers have different amounts of stamina (Cena outlasted Goldust by a good mile), and stamina indicates how many big moves a wrestler can do, as well as how much they can run (no more running away constantly like the old games!). Fatigue plays a huge part, with my Cesaro vs Randy Orton match turning into two decrepit-looking guys who just wanted the match to be over, which was a great visual effect. This system doesn’t take away from the gameplay at all, it just adds that extra element of strategy that wrestling games haven’t seen since AKI Corp made them.

WWE2K15 isn’t too far away now, but it looks like 2K has done for wrestling games exactly what it has done for NBA games, and I for one can’t wait to play through this new era of wrestling sims.

EB Expo 2014: Watch a bunch of Deadpools dance to Ylvis’ The Fox