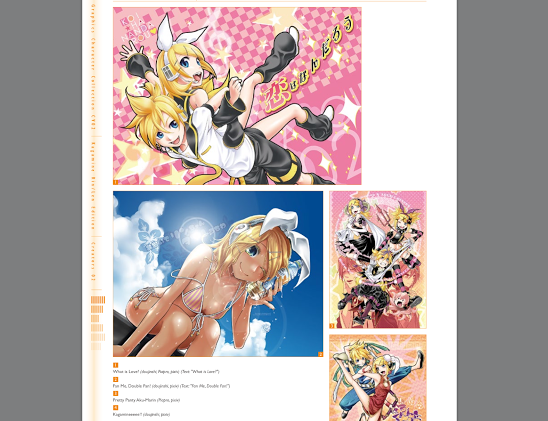 With all the coverage that we’ve been giving Hatsune Miku and her band of adorable vocaloids, I thought that it would be a good time to review a series of Hatsune Miku (and friends) art books by Udon Entertainment. And so each day this week we’ll be publishing a short review from the library!

Four days in, now! Over the last couple of days we’ve looked at the fan art books covering Megurine Luka and Miku herself. There was one other book produced in this little series; a book of fan art for both Kagamine Rin & Len.

The twins are the “youngest” characters in the Crypton team, with cheerful, high voices that make them quite popular, but not for me. Oh no. Of all the vocaloids these two are my least favourite, and while I think the designs of them suit their characters, I’m also not a big fan of the way they look.

But I’m actually quite glad for this book, because it’s possibly the most interesting of them all for the way that the fans have interpreted these two characters. The most immediately obvious thing is that many of the fans have actually aged both characters. There’s some that have decided to preserve the ages of the official Crypton characters, but at least half of the artists have decided that Rin & Len should be at least a few years older than that. This is very different to the fans of both Luka and Miku, who are more interested in preserving their ages. 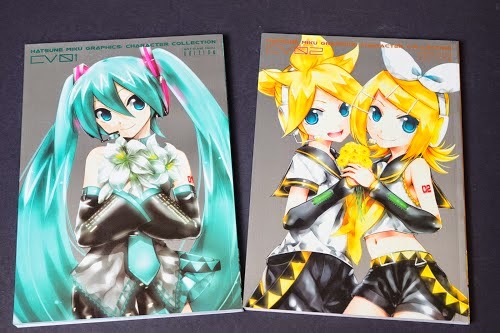 In many cases this is because the artist also sees some kind of odd romantic relationship between the two. I’m not sure how I feel about that, but there are fans of Rin & Len that are clearly inspired by a Romeo & Juliet aesthetic. Other artists like doing the usual underwear or swimwear fan art, and they’re probably more comfortable with it if the twins aren’t also jailbait.

But still some artists just seem to like the idea of Rin & Len should be older than they were originally designed. I actually like this idea. Where I wasn’t a fan of most people’s reimaging of either Miku or Luka, there are many artists in this book who have done a better job than the official artists.

As with the other two books in the series there are little quotes by the artists, which are largely useless as information, but are charming and give the artists their 15 minutes of fame. As with the previous two books, the quality of the production itself is as you would expect from Udon – great paper stock, and superior printing standards.

Even if you’re not a big fan of the characters, it’s worth buying the three books as a set if you’re a fan of the vocaloids at all. As collectibles it does seem odd not to have a full collection, after all. Which brings me to a very important question: where’s the books of KAITO and MEIKO fan art?