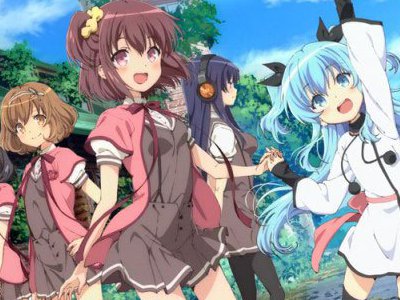 Celestial Method follows the young Nonoka Komiya as she returns to her homeland of Lake Kiriya City. After settling in, Komiya stumbles upon childhood friend, Noel. Oblivious to Noel’s identity, Komiya winds up falsely accusing her once-pal of damaging an invaluable photograph.
The two eventually resolve the situation and Komiya spends her school days interacting with folks from her past and new faces alike. In the process, her recollection of her former friends and their activities slowly falls into place.
The show is set to put the magnifying glass on the changes to Lake Kiriya City’s populace. The main alteration to what Komiya once called home is both peculiar and ominous, however; a massive saucer now towers above Lake Kiriya. It apparently appeared just after Komiya’s departure seven years ago and, while we haven’t yet been given too much information to work with just yet, it’s a thoroughly mysterious plot point that seems to become more prevalent with each passing episode. One character in particular is leading a protest against the saucer whilst the bulk of denizens stay content with its unobtrusive presence.
In addition a potentially engrossing cast and its ensuing character dynamics, then, this anime has something extra going on. Viewers are going to constantly speculate just what this hovering sombrero’s purpose is and how it ties in with all Komiya’s life. 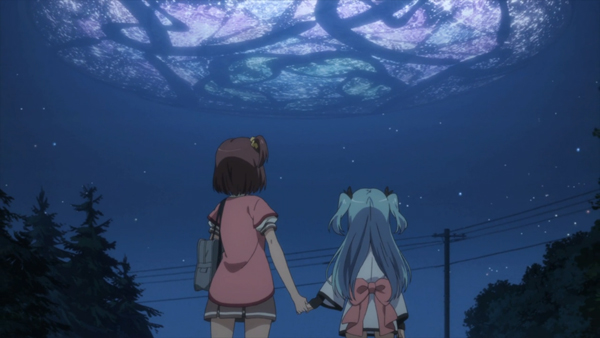 Komiya’s adventures feature some rather whimsical scenery and are captured with versatile camera shots, not to mention a score seemingly bent on eliciting an emotional response. I suspect this is going to be a rather fluffy show for the bulk of its run before things go sour towards the end. Should that theory pan out and the plot unfold reasonably well, I suspect watchers will be all the more invested thanks to the clever usage of the medium for this sort of story.
If there’s one issue I take with Celestial Method so far, though, it’s the decidedly moe depiction of the central characters. Innocent cuteness is lovely and all, but when the characters have ambiguous age ranges and the writers entertain numerous flashbacks to seven years ago (when the characters looked roughly the same), it’s more than a tad jarring. I was distracted enough that it prevented me from fully investing in seemingly pivotal moments.

Besides that, this show has the makings to be as emotional as Ano Hana if it wants to go the sad-but-heart-warming route; even this early in the game, there are more than a couple of parallels to be drawn between the two. If not, I’m anxious to see how far the writers can take this anime original in thirteen episodes as it’s liberated of the restrictions adaptations often suffer from. Here’s hoping the saucer reveal lives up to its own hype.