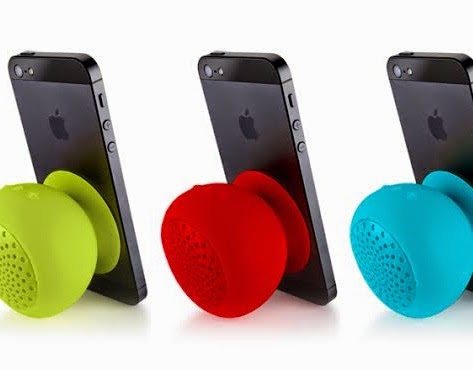 Here’s a tiny review of a tiny gadget. The Q-Bopz is one of the smallest Bluetooth speakers that we’ve covered, but it makes up for its diminutive size with decent sound quality and a go-anywhere kind of attitude.

The speaker is coated in a colourful, splash-resistant silicone skin, and it’ll last for up to 7 hours on a single charge. In addition, its 86g weight means that QDOS have been able to use a sucker pad for the base. This provides a stable platform for on-desk use, but also allows you to stick the Q-Bopz to any convenient smooth surface. QDOS even suggest that you slap it onto the rear of your phone or tablet to provide an instant gadget stand. It’s an ingenious idea, and it works rather well.

Sound quality is better than you’d expect for such an inexpensive device. The soundscape features high trebles and pronounced midtones, giving music a bright, brash quality. Don’t expect miracles: bass is almost entirely absent, and many songs demonstrate the tinny midrange that’s common to most speakers in this class. Nevertheless, the Q-Bopz offers a noticeable improvement over inbuilt phone or tablet speakers, and it’s loud enough to provide casual users with a perfectly acceptable listening experience. If there’s one aspect of the Q-Bopz that’s grabbed my attention, it’s the potential for in-car use. If you don’t currently have a Bluetooth-enabled entertainment system in your vehicle – well, now you do. Again, audio quality is somewhat less than you’d get from your current car radio, but it’s fine for occasional listening or for amplifying a smartphone’s SatNav instructions. But best of all is the Q-Bopz’ ability to act as a phone speaker. This is often something of a gimmick in larger Bluetooth units, but here it’s actually useful. When used in this way, the Q-Bopz has a simple one-button interface – a quick press to answer or end a call, and a long press to redial the last number – so there’s never any need to touch your phone. I made several hands-free calls during testing and, while the transmitted audio was a little muffled, it was clear enough to be understandable at the other end.

The QDOS Q-Bopz is squarely aimed at the casual end of the market, but still manages to deliver plenty of features in a tiny package. Don’t expect stellar audio or cutting-edge performance, but do expect a device that’s much more useful than it initially appears. It’s quirky, fun, and good value for money.