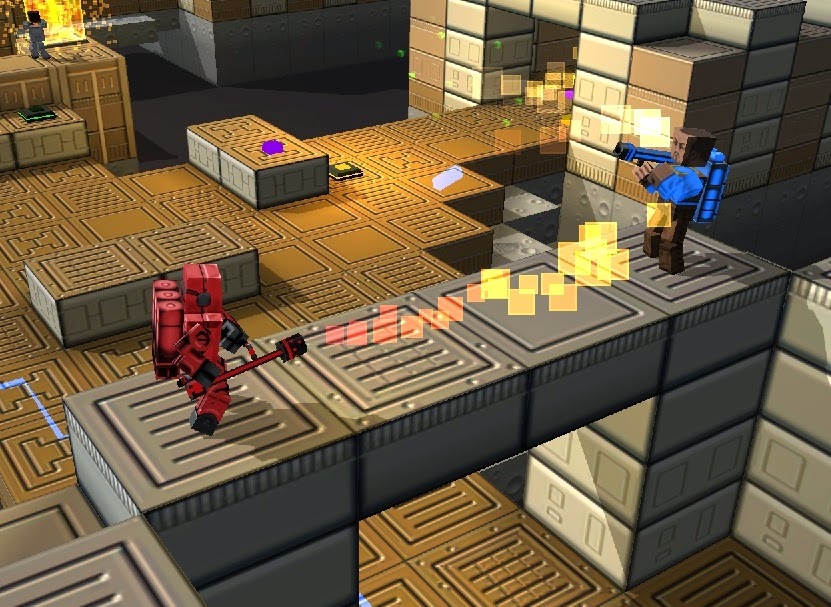 Cubemen 2 is one of the finest examples of the tower defence genre. Previously released on iOS and PC, it’s developed into something massive over the months and years courtesy of community-created levels, and now on the Wii U players access all that content in the definitive version.

As with every tower defence game, Cubemen 2 is immediately accessible and easy to understand. Each player has a tower that they’ll need to protect from waves of enemies that automatically and periodically spawn from their enemies towers. Instead of building static towers, however, in Cubemen you build little soldier-fellows, who can move around the map and will automatically attack anything that enters their firing range. These little fellows range in utility from the basic cheap peon with a pea-shooter through to slow but powerful snipers, mortar users with long range and explosive weaponry, and flamethrowers for massive short-range damage. There’s some strategy behind picking the right mix of units, and then placing them in the optimum positions on each level, but the basic goal is to build up as much firepower as possible and preserve as many units as possible by filtering enemies into spaces where they can be fired upon without much time to return fire.

There are quite a few variations on this formula. The standard tower defence structure is the default way to play, and players will be scored based on how well they perform, with trophies up for grabs on each map. Once you’re done with those, you’ll want to play some of the alternate modes, the best of which include a skirmish mode (where you’ll also need to attack enemy towers while defending your own), capture the flag, and a territory capture mode where you’ll need to send your units around the map to colour the ground to your team. Each of these modes require slightly different strategies to succeed, and while the action is manageable when there are only two sides to the conflict, in multiplayer when there are as many as six teams, all hell breaks loose and it can be difficult to track everything that’s going on. 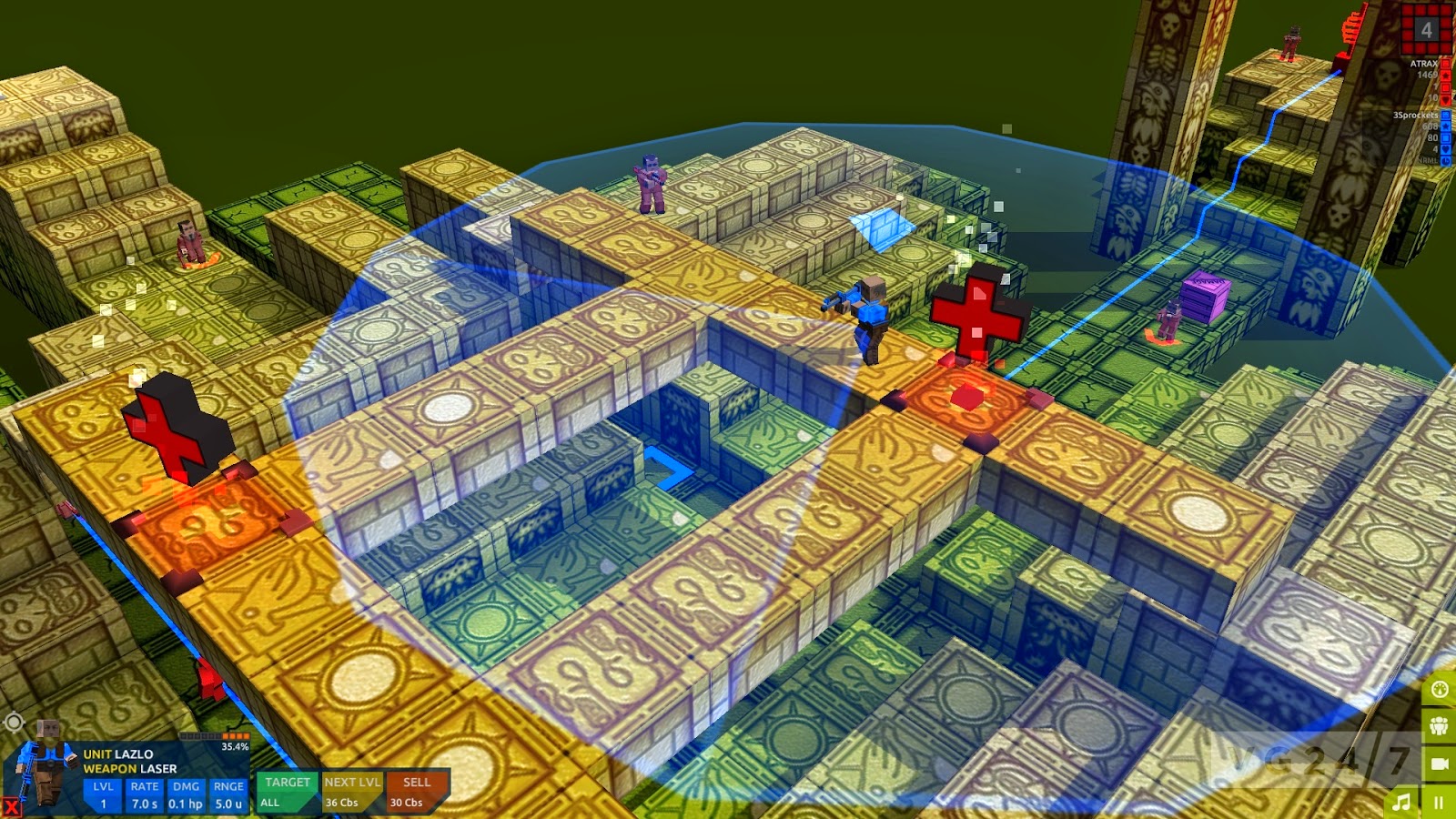 Thanks to some clunky camera controls on the Wii U it’s best to get in loads of practice against the AI in one-on-one duels before venturing into the multiplayer, but once you’ve got the hang of it controlling all of your units on the map is a snap. There’s not much reason to play the game on the TV – you’ll have very little time to look up off the gamepad that you’re using for your map, but the TV screen is just a mirror for the gamepad anyway. This makes it the perfect game to play while other people are watching the TV or playing other consoles.

Visually it’s an appealing game, with blocky characters (hence “cubemen”) and simple, charming backgrounds. There are a lot of different skins that players can apply to customise the environments and characters, from Minecraft-style through to medieval, industrial and Tron-style neon environments. My personal favourite is a volcanic background and skeleton army skin. It makes me feel like an evil overlord. There’s no difference in the statistics of the units if you give them a skin – it’s purely for personalisation purposes – but it adds some needed variety to what is otherwise vanilla presentation, and it is nice that these are all built into the game from the outset – on my iPad version I have to purchase most of the skins as DLC.

There are a lot of levels that have been built by the developer for the game, and those default levels are generally well balanced for both single player and multiplayer. Working through those alone will take a while, but the real weapon in Cubeman 2’s holster is the player-built levels, of which there are many. Thanks to the Wii U’s cross-compatibility with the existing iPad and PC versions of the game there are already thousands of player-built levels that have been built by fans over the past weeks and months, and these can be accessed and played both by yourself and in multiplayer. This feature adds incredible value to the game, even if you’re not keen on creating your own levels. 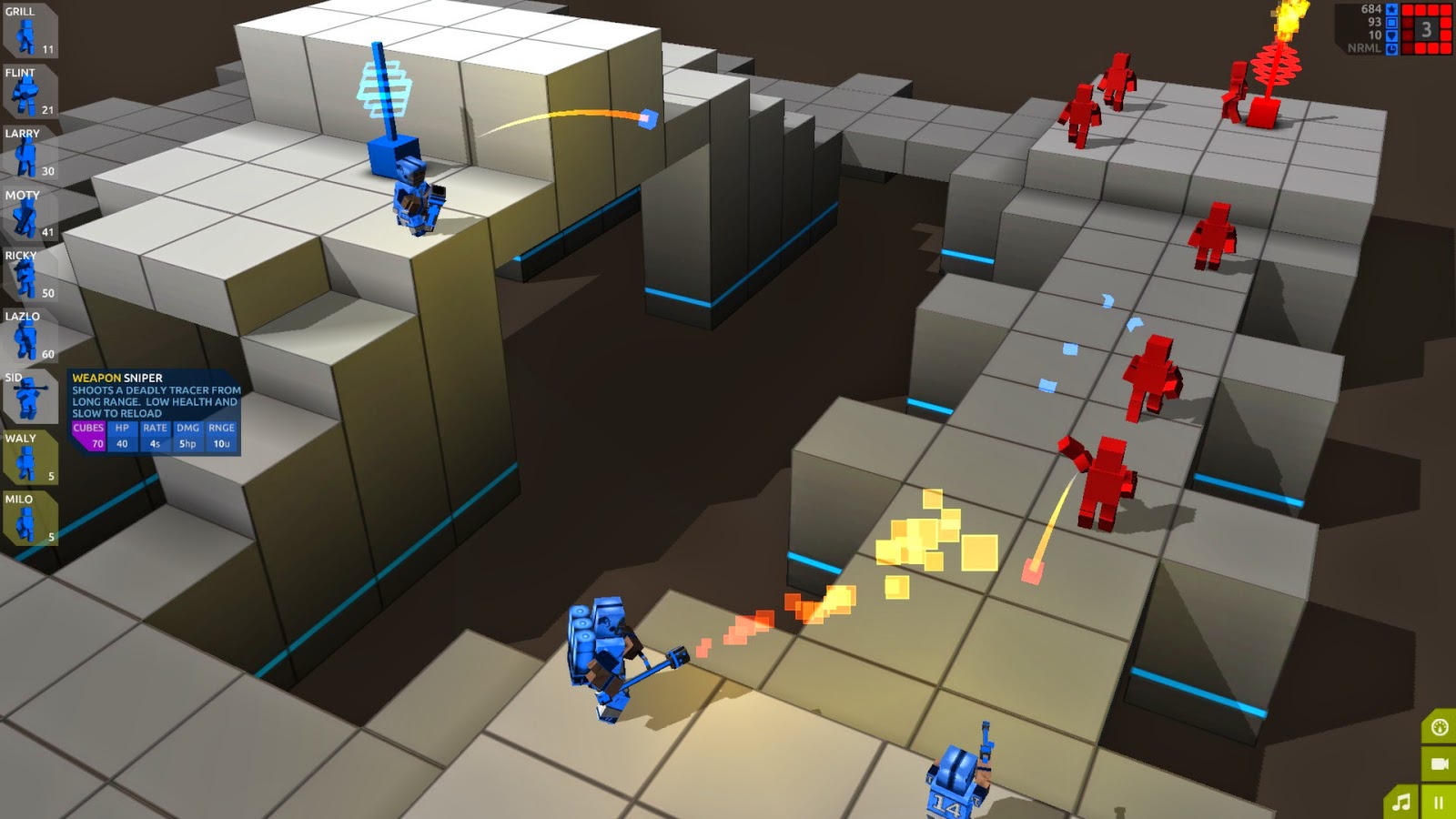 The fundamental problem with the game is that it really needs that multiplayer to be popular to offer long-term value. Enemy AI is nearly non-existent, and through there’s some challenge to be had in tackling the highest difficulty level and trying to get top scores, there is a point where the game loses its novelty and becomes quite repetitive.

Pitting wits against human opponents would compensate for this and make Cubemen 2 a lasting purchase, not just as a tower defence game but as a casual RTS, but the day after the game released, and I’m already struggling to find a full game of six players. Despite being cross play between PC, iPad and Wii U, it seems that this game’s community is going to be a limited one and if you’re going to get much multiplayer value out of it it will be because your friends have copies themselves and you can organise an online session together. I wouldn’t expect to find many random match ups, sadly.

Hopefully the community picks up with the game being on the Wii U and becomes self-sustaining, because Cubemen 2 does deserve success. It’s priced just right as an impulse purchase, and offers so much content that anyone who’s ever enjoyed a tower defence game should get a kick out of it.