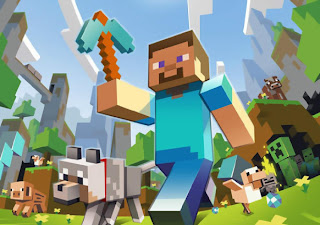 Minecraft is many things to many people. For some it’s a challenge of survival, eking out a living amongst an environment filled with monsters. For others it’s a therapeutic exercise of repletion – dig and craft, dig and craft – the perfect way to unwind after a day’s hard work. Still others use it as a means of creative expression, building elaborate structures block by block.

The point is, of course, that Minecraft is an essential game. Many of us with lesser PCs have so far been denied the full Minecraft experience. There’s a watered down version on mobile platforms, and while that’s fun, it’s taken until now and the excellent Xbox 360 version that’s we’ve had the chance to play the real deal.

Almost everyone knows what Minecraft is about even if they haven’t played it, but for the small minority: Minecraft is a massive game of destruction and construction. You’ll tear the earth and rocks out of the ground, cut down trees and slaughter sheep, and then use the blocks of material they leave behind to construct tools and luxuries. The imagination is the limit with this game, and if you do a bit of a search around Google and YouTube you’ll see massive fortresses that must have spent hours, week and months in the making.

Crafting is the central mechanic of the game, and it involves taking raw materials – sand, wood, rock, and refining them into more complex materials. Then using those materials to make the beds, furnaces and other goods that have a measurable in-game effect. To accomplish everything the imagination is likely to come up with it will take a lot of resource gathering, and yes that’s a bit of a grind. It’s the pleasurable kind of grind though because materials collect quickly and there’s no real rush to achieve anything.

It’s not all about the mining and crafting though. At night the monsters come out, and that’s where the survival element comes into play. They can be warded off by building a little shelter to hide away in at night, and indeed that’s what you’ll do in your first few days; build a stable base to foray out of. It’ll start out crude and cold, but eventually the virtual home will fill with luxuries. Accompanied by a relaxing music score, even if you’re not committed to building a replica of Hyrule, it’s easy to get lost in the world and simply live a virtual life. While not technically the most detailed game visually, Minecraft has a highly appealing aesthetic to it too that makes it a joy to wander through. 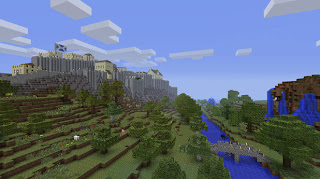 The real success of Minecraft is how aimless the game itself is. Your avatar has no name, there is no plot to play though. It’s a game about setting personal goals, and because of that the experience is more intense – it’s your own. In many ways Minecraft is the realisation of everything that interactive games have been promising for 20 or more years; a virtual sandbox for people of all ages to make their own, set their own agenda and measure of success, and then succeed or fail in their own time. Nothing about Minecraft is stressful or demanding. It lacks any pretension. It just exists and people can take it or leave it at that.

On the Xbox the simple controls are all mapped to the controller comfortably, and the engine runs just like you’d expect on the PC. There’s a simple in game tutorial that does a good job of walking players through a system interface that, just like on PC, is functional if not entirely intuitive. There’s all the online features to play with too, because Minecraft really is a game that is better enjoyed with friends.

It’s an essential game to play in some form. While there’s nothing here that will lure PC gamers over, the Xbox port of Minecraft wasn’t for them. It gives a new group of gamers a chance to experience the game though, so it’s a great addition to the Xbox download library.