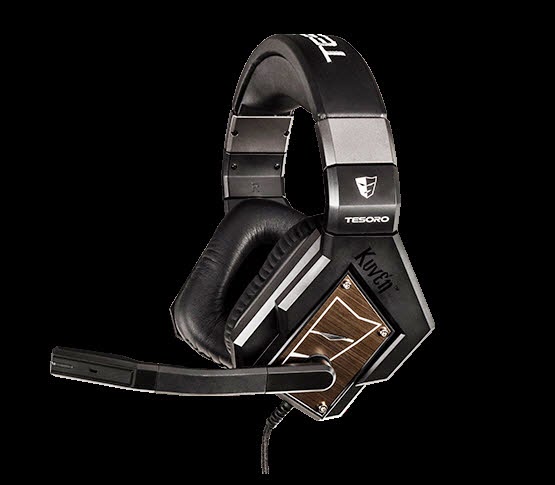 Comfort, flexibility and quality audio. On the surface, three fairly simple things to hope for in a headset, but in truth few manage to balance that trio of elements well. Enter the Tesoro Kuven pro True 5.1 Gaming Headset, which offers a lot of options but quality build as well.

I really liked the somewhat understated appearance. I do not have any particular problem with glowing, pulsating headphones but I have been seeing a lot of them lately. Here the black and brown colour scheme stands out because it is not overly flashy and simply show off the Tesoro ‘eyes’ logo in a purple illumination and nothing else. The shape of the cups initially struck me as odd. Most headphones are rounded in nature, so they can try to fit snugly around or on the ear. Here they have a slightly more rectangular shape that fits around the ears with comfortable memory sponges that sat comfortably on my head for hours at a time.

The audio is excellent, with true 5.1 surround and a virtualised 7/1 functionality as well. The bass gets good and low with plenty of rumble without distorting. The higher notes are also outstanding. Whether I was playing Battlefield 4 as a building was starting to collapse under my character’s feet or moving around the map in Age of Wonders III and listening to light, musical notes and sound effects, the Kuven proved up to the task without any static or crackling. I will say that the bass does not get quite as rich and gravelly as I have heard on other headsets, but it never winds up overblown or distorted either. The memory sponges do leak sound in and out. That’s not a big deal for the most part, but if you are in a room with someone else and you have your show/game/music loud, there is a good chance they will be able to hear it.

The microphone is less subtle, extending off of one of the cups in a thick, slightly distracting wand that also has an on and off indicator. The microphone can be swivelled upward to get it out of the way when not in use, but it is not quite as elegant as the retractable or removable microphones I have seen on other units. The microphone itself is also muffled. It is of the noise cancellation variety, which I do prefer over boom microphones that seem to pick up every sound in the room and can confuse the people I am trying to chat with in the game. Here the cancellation is perhaps too aggressive but certainly manageable and preferable to the other extreme. 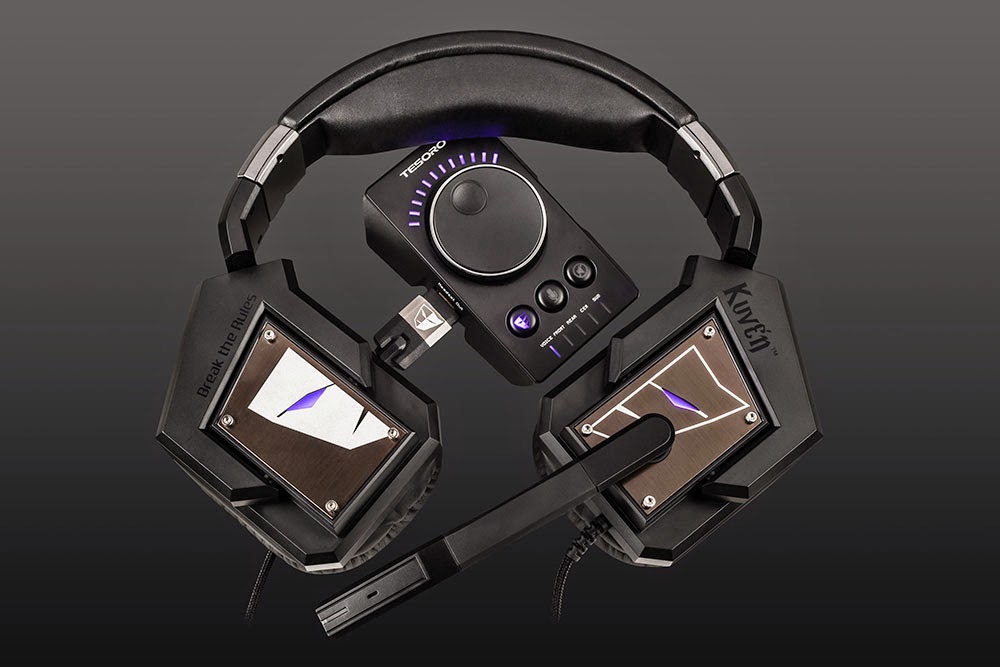 The braided cable is sturdy and ties into the Control Station with a handful of mixing and balance options. There is full channel control, including a quick on and off option for speakers and microphone. There is a control wheel built in for channel blending (such as voice, front, rear, central and subwoofer options) and volume controls as well. It does add bulk to the system, but it is worth the additional control. Another nice design choice is that the cups can be taken off easily for thorough cleaning (though the dark design of the unit means it looks sharp and does not pick up visible dirt and scuffs very easily).

The overall build design is solid, with an adjustable band across the top that has some fairly thick padding on the underside of it. The nice leather finish to the head pad keeps it from getting dinged up and tearing. The end result is that it rests comfortable on top of the head without being too tight or sliding out of place.

The audio quality is among the better headsets I have tested, with a unique build that is completely comfortable even for long sessions of gaming. The Tesoro Kuven pro True 5.1 Gaming Headset is not as flashy as some of its counterparts, but the numerous options and quality design make it easy enough to overlook a couple of smaller flaws such as the sometimes-too-quiet microphone that juts out at all times and foam pads around the ears that let some sound leak in and out during use.