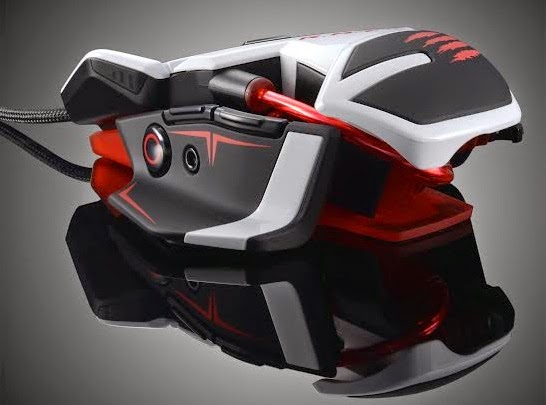 Most people have a favourite subject to chat about with their friends. For some it’s sport, politics, boys, girls, cars or music. For me, it’s the History of the Gaming Mouse, 1983-2014. I don’t get out much.

And that’s a pity, because people are missing my thoughts on why the R.A.T. series is so great. It’s all down to that weird, cyborg-inspired shape. Gaming mice can be held in a number of ways, with the most common being a fingertip or palm grip. Fingertip grip is light and precise, but any pressure on the side buttons tends to nudge the cursor away from where you want it to be. Conversely, a palm grip – one where you place your hand right on top of the mouse – is more stable, but requires extra effort to move. That’s where the R.A.T’s clever design comes in. The rear section of these mice features a slightly raised, length-adjustable hand-rest which exerts steadying pressure with most grip styles. It’s the best of both worlds: a mouse which is light and responsive, but also stable and extraordinarily comfortable to hold.

The Tournament Edition is the latest member of the R.A.T. family and, as the name suggests, it’s been designed with competitive gaming in mind. The right-handed-only design is similar to the M.O.U.S.9 with a high-gloss finish, two side buttons, customisable DPI selectors and a ‘snipe’ button to temporarily reduce sensitivity. However, the new TE features a weight reduction – the all-plastic design condenses the mass to a mere 90g – and a spectacular new laser sensor. The mouse is capable of anything up to an eye-watering 8200 DPI, and advanced properties such as sensitivity, sensor damping, lift-off distance and power consumption can all be controlled through the driver software. Most importantly, the pointer action is crisp and precise, and the mouse tracked brilliantly with every mousepad I threw at it. Mad Catz’ software has also evolved. Their latest interface provides three user-definable profiles which are toggled using a dedicated, colour-coded button on the left side of the mouse. Each profile allows any of the mouse’s buttons to be programmed with keystrokes, Windows functions and user-defined macros. Programming is performed using a simple drag-and-drop interface, and is generally easy to set up. However, there’s one small omission. As we saw with the S.T.R.I.K.E.3 gaming keyboard it’s not possible to include user-defined delays between commands. As a result, every component of a complex macro is executed in quick succession, and most games just can’t keep up. The current software also has some issues with Battlefield 4, although Mad Catz is working to fix them. Overall, though, the software does everything you’d want it to, and it’s only macro fiends that should exercise caution.

Unfortunately, there’s a bigger problem. Mad Catz has been a little over-zealous in its quest to trim every unnecessary atom from the TE’s chassis, and the result is a mouse that’s flimsier than anything they’ve produced before. Our review sample suffered from a few issues: a rattly DPI switch, the occasional squeak from the left mouse button, and a thumbrest that creaked when gripped tightly. None of these issues affect gameplay, and the TE comes with a 2-year warranty, but it does feel as if solidity has been compromised for the sake of a few grammes of weight.

It pains me to write those words because, in most other respects, the R.A.T. is as shiny as its glossy finish. It looks nice, is fantastic to hold, and performs brilliantly in games. It’s still a good mouse. Nevertheless, a more robust build could have made it a great one, and that’s a missed opportunity.