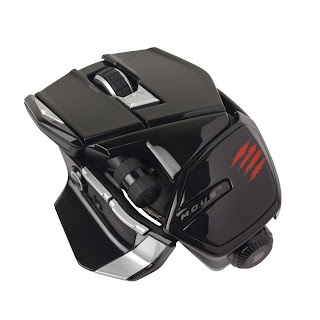 You might detect a certain amount of fanboyism at the start of this review. I’ve been using a Mad Catz RAT3 gaming mouse for the last year or so, and it’s up there with the best: a snappy optical sensor, fabulous ergonomics, decent build quality and a low, low price. The RAT3 may be entry-level, but long-term use has shown that it’s a winner. So, you’ll forgive my girlish squee of delight as the latest member of the Mad Catz family dropped through my letterbox. The MOUS9 is a very different beast – it’s high-end, and it’s aimed squarely at the general user – but it’s packed with technological innovations. And, well, look at it. It’s gorgeous.

That’s no accident. Mad Catz found that casual users were buying their mice because of looks and comfort, so the MOUS9 takes these aspects to a whole new level. The MOUS resembles a RAT which has been pimped with a thick layer of office chic. The length is adjustable and, while the high-gloss coating might not be to everyone’s taste, the body graphics and finish combine to create an impressive visual impact.

The ergonomics remain largely unchanged from the RAT range, which is to say: they’re excellent. The thumb buttons are perfectly placed and the moving parts click and roll with a reassuring air of quality. As well as basic mouse features you get a four-way scroll wheel, an extra horizontal wheel and a further five programmable buttons. The driver software is a step up from Mad Catz’ usual offering too, with an interface which allows programmable functions such as a screen magnifier and a tiled list of active programs. It’s a shame that settings can’t be saved directly to the device but, since Mad Catz provide a host of downloadable profiles, this shouldn’t be too much of a problem. 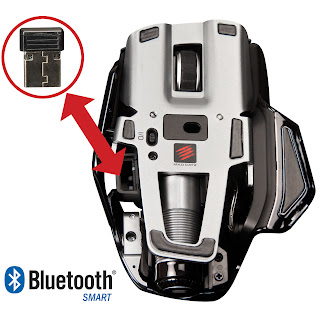 The MOUS9 contains a bunch of technologies aimed at the mobile professional, and this is where things get substantially more nuanced. The MOUS is part of Mad Catz’ GameSmart range, so it’s designed with wireless cross-platform use in mind. This means that you’ll need a PC or Mac that supports Bluetooth Smart technology, or a free USB port for the dongle that comes nestled inside the chassis. Bluetooth gives the mouse a 10 metre range and allows it to subsist on an AA battery for an entire year, but it also introduces some flakiness into its performance. We found that things were OK as long as there was a clear line of sight between the dongle and the mouse, but that there were dropouts and lag when the dongle was fitted to the rear of a PC workstation.

The sensor is also something of a mixed blessing. It’s an Avago track-on-glass unit and, true to its word, it absolutely devours tricky surfaces. It worked well on an old kitchen table, an IKEA desk, a leather pad and even a hairy dog. However, it was patchy when used with a cloth mousemat and it tracked poorly on the traveller’s surface of choice, the humble A4 notepad. In addition, pointer movement feels slightly fuzzy around the edges, and a mouse training program provided test results which were roughly the same as a basic office mouse. Finally, the sensor is locked at 125Hz and 990 DPI, although you can temporarily reduce the sensitivity using a ‘snipe’ feature. These values are fine for laptop work, but larger displays may force you to increase the sensitivity via the Windows control panel.

All of this means that there’s a disconnect between how this mouse looks and how it performs. Is that a problem? Maybe, maybe not. If you work in an environment where image is important and you don’t need gaming-grade precision, this could be the mouse for you. It’s easy to imagine that the MOUS will become a staple feature of conference stands and sales meetings the world over. However, the MOUS comes with a high price tag, which makes it hard to recommend for a more general audience. In short: if appearance is everything, buy a MOUS. However, if you want a device that looks like a RAT and performs like a RAT, get yourself a RAT.

Review: Mario Vs. Donkey Kong: Minis on the Move (3DS)