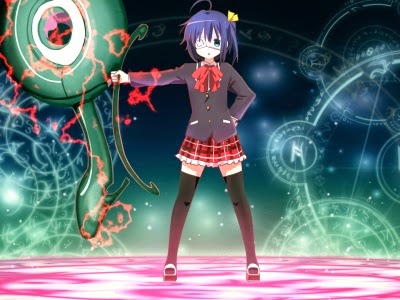 Sentai Filmworks has unveiled the next batch of anime releases to hit the shelves this December and it makes for one of more expansive lists of the holiday season. The company will be releasing no less than eleven titles within a sixteen day span. Said titles run the usual gamut of anime movies, television shows, and collector’s edition versions.

There are death metal parodies, swordswomen, heartwarming tales of distraught youth, intergalactic robots, and the usual omnipresent bit of chocolatey-coated ecchi in the below list.

In the interest of not ramming decidedly verbose synopses of so many diverse shows down your throat, though, here’s our pick of the lot (also pictured above):

Yuta has a problem. As one of the thousands of Japanese students afflicted with “chunibyo”, a state where they’re so desperate to stand out that they’ve literally convinced themselves that they have secret knowledge and hidden powers, Yuta spent most of his middle school years living in a complete fantasy world. But that’s not his major problem now, as with a lot of work and effort, he’s finally managing to overcome his delusions to the point where he thinks he’s ready to start high school with all his cards in order. No, his BIG problem is the girl he first encounters climbing on his balcony. Because it seems that his own efforts to rid himself of his chunibyo have attracted the attentions of another sufferer, and SHE’s decided that this makes him her soul mate. And since Rikka’s just moved in upstairs, now he’s being sucked into HER fantasy world! Can a formerly wild and crazy guy handle being the focus of a completely delusional girl? Or will his own chunibyo return with a vengeance? Either way, the phrase “madly in love” is bound to get redefined in LOVE, CHUNIBYO & OTHER DELUSIONS!

Will you be nabbing any of these releases this December?